A 3-0 final score? Nobody wants to see Super Bowl like that 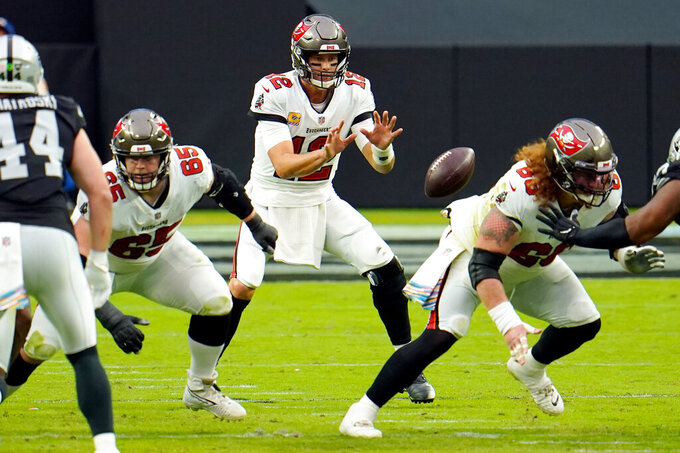 FILE - In this Oct. 25, 2020, file photo, Tampa Bay Buccaneers quarterback Tom Brady (12) receives the ball from center Ryan Jensen (66) during the first half of the team's NFL football game against the Las Vegas Raiders in Las Vegas. “It didn’t take too long, really,” Jensen said of building a rapport with Brady. “We both kind of have a fiery spirit and, you know, I think that has helped us quite a bit, getting to know each other and knowing what we’re about.” (AP Photo/Jeff Bottari, File)

TAMPA, Fla. (AP) — There was one other time when this year’s Super Bowl teams, the Chiefs and Buccaneers, closed out the season in Tampa.

The NFL and football fans around the world can only hope Sunday’s showdown turns out better than that one.

Fans of the NFL Films’ Football Follies will recognize the footage from the Chiefs-Bucs game played on the last weekend of the 1979 regular season.

A torrential rainstorm hit Tampa Stadium, flooding the field and the stairwells in the stands, and leading to a comedy of errors and some virtually unwatchable football.

The totals: seven fumbles, seven turnovers, four first downs for the Chiefs, one 7-yard loss by Bucs kicker Neil O’Donoghue, who tried, unsuccessfully, to scoop up a bad snap and run for a first down.

O’Donoghue made up for it. His 19-yard field goal in the fourth quarter was the winner.

Some Bucs celebrated in the slop at midfield as though they’d won the Super Bowl.

In fact, they had clinched the NFC Central title for the franchise’s first playoff berth -- only two short seasons after ending a record streak of 26 straight losses over the team’s first two years.

Note: There is rain in the forecast for Sunday, but the weather is expected to clear before the 6:30 p.m. kickoff.

The Chiefs held a Saturday morning walk-through before boarding an afternoon flight to Tampa. They are without linebackers/assistant outside linebackers coach Britt Reid, coach Andy Reid’s son. The position coach was involved Thursday night in a multi-vehicle accident that injured two young children, and did not make the trip.

Running back Darwin Thompson, who missed Friday’s practice with an illness, participated in the walk-through. Backup center Daniel Kilgore returned from the reserve/COVID-19 list after clearing the league’s safety protocols.

Left tackle Eric Fisher, who tore an Achilles tendon in the AFC championship game, was on the sideline with his left leg on a scooter.

“He’s a part of the team,” Andy Reid said. “We got a lot of the guys that are a part of it and we ask them to come out. Fish is a big part of it. I mean, he’s a reliable guy and he’s been here a long time.”

The Bucs concluded their on-field preparations with a 35-minute practice in their indoor facility. Every workout during the week followed the schedule of a regular-season game.

“Whatever meetings we might have are in here, so it just flows easily″ coach Bruce Arians said.

The Bucs conducted a “simulated game,” during a walk-through practice in shorts and T-shirts and no helmets. Every player participated, including receiver Antonio Brown (knee) and tight end Cameron Brate (back), who are both listed as questionable.

“I’ll talk tonight,″ Arians said. “It’s not very long. We watch a video that we have a lot of fun with from our last game when we win, then the offense, defense and special teams will meet in the morning.″

“No, like I told them, if you need a speech to get fired up to play football, you’re in the wrong game,″ Arians said. “I have to laugh when people bring in speakers and stuff. I don’t know the message they’re going to bring. There’s only one voice in this one.″

Jensen’s confidence as an eight-year NFL veteran has come in handy, and it’s no surprise he thinks highly of his performance this season.

He was asked earlier in the week leading up to the Super Bowl who he thought the top three centers in the league are, and acknowledged it was “a hard question” to answer.

“In my opinion, Corey Linsley from Green Bay had a phenomenal year,” Jensen said. “He played lights out. It’s pretty obvious with being first-team All-Pro.”

“Frank Ragnow from Detroit,” Jensen said. “I know he had a really good year also.”

“You know, obviously, I want to put me in the top three,” Jensen said. “I feel like I had a pretty good year and I felt like I’ve stacked a couple of good years. So, I think that’s going to be my top three right around there.”

For the record, Linsley was selected as the center on The Associated Press All-Pro Team, as Jensen mentioned. Making the second team were Ragnow and Indianapolis’ Ryan Kelly.

Jensen, however, didn’t receive a vote from the national panel of 50 media members who regularly cover the league.

“Loved being a part of this. I came into this hoping to follow up on what Sam Darnold did last year” Jones said, referring to last year's champion in the inaugural Super Hole. "I will be back. Hopefully not against Matt Guy, that guy is unstoppable.”

Flutie, the 1984 Heisman Trophy winner for Boston College, was fortunate to team with Guy.

“All my practice this week was well worth it” said Flutie, who practiced with Guy since Monday, bringing his own Cornhole boards. Flutie and even sent Guy a text Monday night letting him know he had just hit 10 straight shots. “This was by far the best event I have taken part in. Cornhole is just flat-out addicting.”