4 Titans out on defense, Tannehill chance to start vs Denver 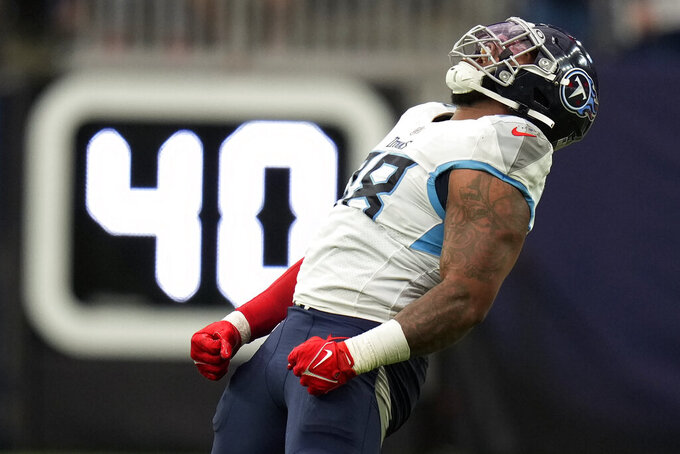 NASHVILLE, Tenn. (AP) — Titans quarterback Ryan Tannehill has a chance to start Sunday after practicing all week on his sprained right ankle, and Tennessee likely will need the veteran since four defensive starters were ruled out Friday against the Denver Broncos.

Tannehill still is being evaluated and was limited Friday at practice. Yet he practiced some each day this week after missing two straight games with an ankle injury suffered in the Oct. 23 win over Indianapolis. Rookie Malik Willis started for Tannehill and is 1-1 as his replacement.

“We’ll see how it goes over the next couple of days," Titans coach Mike Vrabel said of Tannehill. “I think he’s making progress and feeling better.”

The Titans (5-3) will be without four starters on defense, including Jeffery Simmons, the 2021 Pro Bowl defensive tackle who is in a walking boot after aggravating his sprained left ankle. Simmons had played the previous two games despite not practicing.

The other three are outside linebacker Bud Dupree (hip), inside linebacker Zach Cunningham (elbow) and strong safety Amani Hooker. Hooker is missing his second straight game with a shoulder injury. Backup safety Josh Thompson also is out with a knee injury.

The Titans might get two players off injured reserve before Sunday. Rookie wide receiver Treylon Burks and nickelback Elijah Molden both practiced all week. The Titans must activate them Saturday for them to play against the Broncos (3-5).

“They were moving around OK," Vrabel said. “We’ll see how they feel in the morning, and we’ll have till tomorrow to make a decision. But it was good to have them out there.”