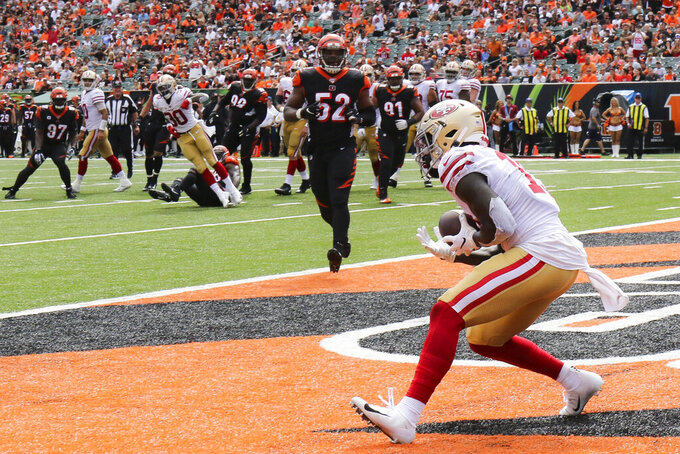 SANTA CLARA, Calif. (AP) — San Francisco coach Kyle Shanahan believed the improvements the team made leading into his third season would make the 49ers a contender.

The early results have been extremely positive, with San Francisco opening the season with back-to-back road wins for the first time since 1989, capped by a dominant performance in Cincinnati.

The Niners gained 572 yards of offense for the fifth-most productive day in franchise history and dominated up front defensively against Cincinnati in a 41-17 victory Sunday.

"That game yesterday was as good as any game I've been a part of," Shanahan said Monday. "That will only give us confidence, but it doesn't make anything easier. The games will only get harder."

The Niners (2-0) will seek their first 3-0 start since 1998 in the home opener Sunday against a Pittsburgh team that will be without injured star quarterback Ben Roethlisberger.

About the only thing that went wrong on the road trip that started with an ugly win at Tampa Bay and featured a weeklong stay in Youngstown, Ohio, was a broken leg for left tackle Joe Staley.

Shanahan said Staley is expected to miss between six and eight weeks, which could be a big blow to the offense. Rookie Justin Skule, a sixth-round pick out of Vanderbilt, is slated to take his spot, but Shanahan said the team would be aggressive to look for upgrades, with the most intriguing possibility being Washington holdout Trent Williams.

"We would love to if there were options," Shanahan said. "You look at anything that's possible. I don't think there are a ton of great options out there that are possible."

Running game. With Jerick McKinnon out for the season with a knee injury and Tevin Coleman sidelined by an injured ankle, the 49ers running game thrived with the backups in charge. Matt Breida had 12 carries for 121 yards, Raheem Mostert added 13 for 83 yards and Jeff Wilson Jr. ran for two TDs. San Francisco finished with 42 carries for 259 yards, averaging 6.2 per carry.

There wasn't much that didn't go well in a 24-point road win. There were a few issues on special teams. Robbie Gould missed a 39-yard field goal, and Richie James had two punt returns for 4 yards and gained only 13 yards the only time he tried to return a kick.

Jimmy Garoppolo. There were plenty of questions about Garoppolo's play after he struggled in the season opener in his first game back from a season-ending knee injury. There were no such questions after Week 2. He completed 17 of 25 passes for 297 yards and three TDs. His 131.2 passer rating was his best in 10 starts with San Francisco and he averaged 11.9 yards per attempt thanks in part to Shanahan scheming open receivers on several plays.

"His mind is incredible — just how he's two plays ahead while we're running the current play," Garoppolo said of his coach. "It makes everything so easy. When he gets in a rhythm like that, it puts everyone in a good position."

WR Dante Pettis. The player who was supposed to be San Francisco's top wideout is off to a slow start. He got just two snaps in the opener, when he had one catch for 7 yards. He played more this past week but wasn't targeted on a single pass. He did throw one on a trick play that went for 16 yards to Mostert.

Staley's injury was the most significant, but edge rusher Dee Ford also left the game with an injury to his quadriceps and knee. He was sidelined with a similar injury in training camp and Shanahan said he didn't know what Ford's status would be for this week.

The 49ers play their home opener against Pittsburgh seeking their seventh 3-0 start since the merger. They made the playoffs in all but one of those seasons, missing only in 1980 when they went 6-10.

By Dennis Waszak Jr. 40 minutes ago
By Josh Dubow 5 hrs ago
By Jim Vertuno 8 hrs ago
10 hrs ago
By Barry Wilner 11 hrs ago