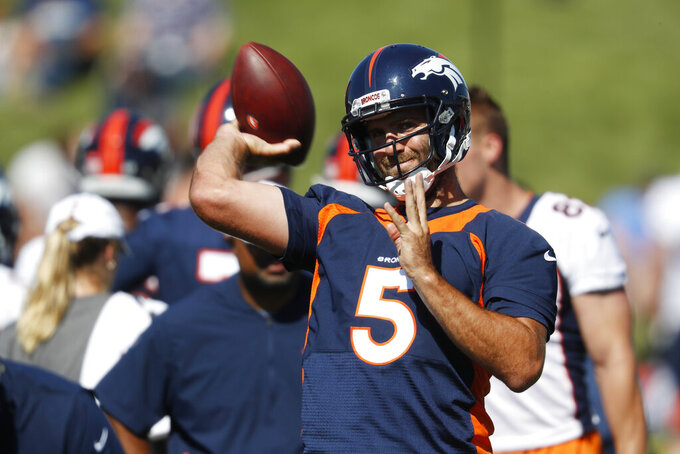 Like receiver Emmanuel Sanders, Leary is coming off a torn Achilles tendon.

All six players say their injuries forced them to reflect during rehab and gave them a newfound appreciation for football.

Collectively, Leary suggested that will prove a benefit as the Broncos embark on another new scheme under new offensive coordinator Rich Scangarello.

"I think we got a lot to bring the offense, a lot of juice. We've got the right mentality coming into camp. I mean, all of our teammates are happy to see us coming back."

Leary said he realized during his recovery that he has more resilience and patience than he thought, and he's sure he's not alone in that discovery.

"With the type of injury I had there was so much down time in the beginning where you can't do anything," Leary said. "You're just sitting around. So, I started reading more, just talking to my wife more, just learning more about myself and just realizing how much I appreciate the game, how much harder I wanted to work in rehab to get back out on that field."

Leary was cleared near the end of OTAs, but Sanders and Lindsay missed the Broncos' entire offseason program. Both were back on the field this week, however, when the Broncos became the first NFL team to open training camp.

"Moving around, feeling no pain, feeling good and feeling like myself," Sanders declared. "I know a lot of people didn't expect that, so it's just a testament of all the hard work I put in, all the pain that I went through to be standing here."

Although Sanders is limited, he's building a rapport with Flacco by being on the field during camp instead of the sideline .

Much like Peyton Manning did in 2012 after missing an entire season in Indianapolis following a series of neck fusion surgeries, Flacco is coming to Denver with a shot at resurrecting his career following an injury.

"There is an energy about coming here and an excitement that I feel about coming to this new team and getting another chance to be a starting quarterback in this league," Flacco said.

General manager John Elway said, "Any time you get traded midway in your career or two-thirds of the way through your career, you've got something to prove."

"Yeah, there's no doubt," Flacco agreed. "Listen, I think I've got a lot left in the tank. And I feel like I can do a lot more than I've shown in my 11-year career. I'm excited about that."

And starting his first training camp outside Baltimore, Flacco said, "I feel like a little kid."

So does Lindsay, who hated having to watch fellow running backs Devontae Booker and Royce Freeman get carries while he continued his rehab during OTAs.

NOTES: Alexander Johnson was the first of many ILBs who filled in for Todd Davis, the team's leading tackler last season, who is expected to miss 3-4 weeks with a partial tear of his right calf.