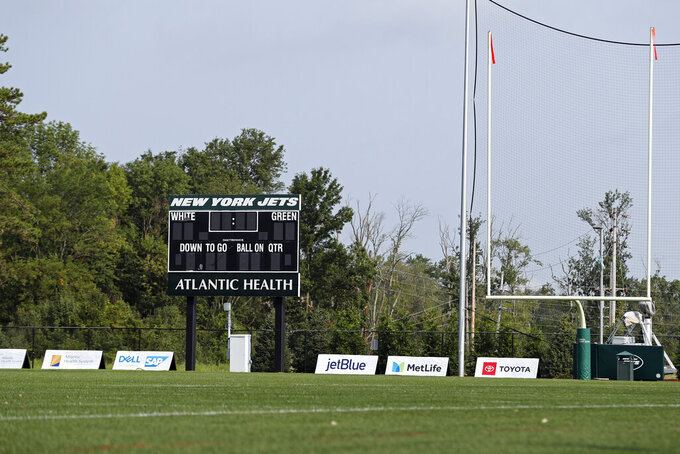 An empty field is seen at the New York Jets NFL football team's training camp in Florham Park, N.J., Thursday, Aug. 27, 2020. The New York Jets canceled their practice in an apparent response to the shooting of Jacob Blake, a Black man, in Wisconsin. The Jets provided no immediate details on their decision to not practice. (AP Photo/Adam Hunger)

FLORHAM PARK, N.J. (AP) — Empty practice fields made for loud and powerful statements at nine facilities across the NFL.

“We’ve been protecting the shield,” Jets running back Le’Veon Bell wrote of the NFL in a Twitter post. “It’s time for the shield to protect us.”

Blake, 29, was shot by police, apparently in the back, on Sunday in Kenosha as he leaned into his SUV, three of his children seated inside. The shooting was captured on cellphone video and ignited new protests in the U.S. three months after the death of George Floyd under the knee of a Minneapolis police officer touched off a nationwide reckoning over racial injustice.

“I do see more urgency to move the needle,” Chargers coach Anthony Lynn said. “I see more going on. It doesn’t happen overnight. Overall, I feel good about the movement. What happened in Wisconsin is ridiculous. If anything, we are going to double down and do more.”

The Baltimore Ravens, one of 19 teams that did practice, issued a strong and detailed statement that included seven steps society can take to take positive action. They included arresting and charging police officers responsible for shooting Blake and killing Breonna Taylor in Louisville, Kentucky, in March.

“With yet another example of racial discrimination with the shooting of Jacob Blake, and the unlawful abuse of peaceful protesters, we MUST unify as a society,” the statement said. “It is imperative that all people — regardless of race, religion, creed or belief — come together to say, ‘Enough is enough!’”

Broncos running back Melvin Gordon grew up in Kenosha, and he and other players, coaches and staff posed for a team photo that was posted along with a statement on Twitter.

“This hits home for all of us,” part of the statement read. “In the strongest terms, we condemn police brutality, excessive force and these senseless acts of violence that have caused so much pain. It is time for accountability and real policy reform.”

The Detroit Lions canceled their practice Tuesday, protesting the incident involving Blake, and racial injustice. They were back on the field Thursday, but the impact of their actions was clear across the rest of the league.

“I think that if there’s any chance that we got everybody to maybe stop and think for a minute, that’s really great,” Lions coach Matt Patricia said Thursday during a video call.

The Titans came up with three concrete things they plan to do after canceling their practice: make sure everyone’s registered to vote; focus on talking points for meeting with elected officials; and hold a Zoom call to connect with thousands of students around Middle Tennessee designed to help teach the same equality and acceptance the players experience at work.

“I take great satisfaction when players tell me that they feel safe here,” coach Mike Vrabel said. “They feel comfortable saying whatever they want, whatever emotion that they have. But they don’t when they’re away from here. And so I want to try to fix that away from here.”

The New Orleans Saints were also among the teams that held practice, but the players wore Blake’s name on the front or crown of their helmets where they usually have their own names during camp.

“It’s just something we decided to do last night to honor him,” coach Sean Payton said. “It was something we felt would be appropriate, and I think they (the players) were for it.”

On Wednesday night, the Washington Football Team announced it would not hold its practice at its home stadium on Thursday afternoon. It was supposed to be broadcast live on local radio and televised at night. Washington, which recently dropped its longtime name of Redskins, last week hired Jason Wright as the first Black team president in NFL history.

The Chargers were scheduled to have a scrimmage to break in their new SoFi Stadium, but canceled.

Jacksonville Jaguars coach Doug Marrone said players and coaches met for over two hours Thursday morning before voting — 37 to 36 in favor — to practice as scheduled. But the team canceled its afternoon meetings and had another group discussion about what they can and will do moving forward to foster change.

Jaguars wide receiver Chris Conley called on the “faces of the league” — the quarterbacks — to take an even greater role in trying to affect change.

“I think the biggest thing right now is to ... listen to my African-American teammates and friends that aren’t even in football,” Steelers quarterback Ben Roethlisberger said, "just to get a better understanding to educate myself.”

Following morning meetings and a walkthrough, Cleveland’s players met as a group for nearly an hour and decided to cut their practice in half — one hour on the field, the other inside discussing ways to make impactful change.

Browns defensive end Myles Garrett said the team hopes the brainstorming session will create ways to “move things forward.” Garrett began his Zoom call with reporters by calling for the police who shot Blake and killed Taylor to be held accountable.

Browns first-year coach Kevin Stefanski applauded the actions of his players and said he was proud of the organization’s new alliance with the Cleveland Indians and Cavaliers.

“We want to be pillars in the community,” said Stefanski, whose father, Ed, is an executive with the NBA's Detroit Pistons. “I don’t know what the right answer is, but we want to be about action.”

The Carolina Panthers, Las Vegas Raiders, Miami Dolphins and Seattle Seahawks all had previously scheduled off days from practice Thursday.

The protests weren't limited to the NFL. After the Milwaukee Bucks opted not to play in their playoff game Wednesday, two other games were postponed later in the day and a second night of games was also wiped out Thursday. The WNBA also canceled games for the second straight day.

Players and teams from MLS and the tennis tours also sat out competitions.

“I’m not promising anything, but there could be a plan as far as just standing up and doing what’s right,” Mostert said. “Because at the end of the day, that’s all that matters. Human life is is the most important thing."