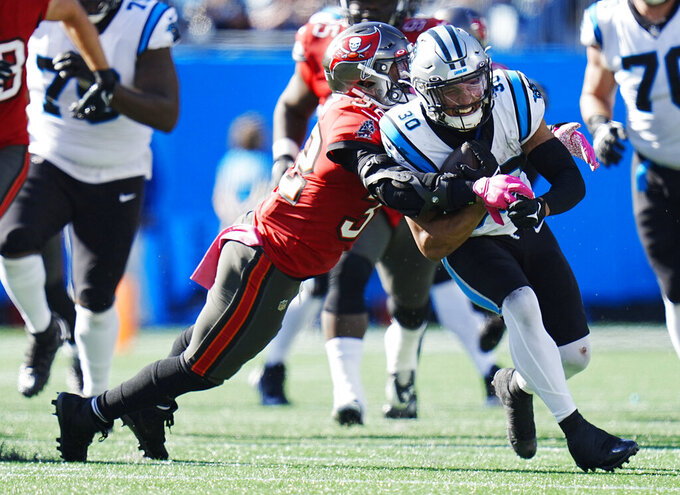 CHARLOTTE, N.C. (AP) — It took seven games, a major trade and a head coaching change, but the Carolina Panthers are finally creating an identity on offense.

When interim head coach Steve Wilks took over two weeks ago, he told offensive coordinator Ben McAdoo and his staff that he expects the team’s primary focus to be on running the football — regardless of the score.

The Panthers saw the fruits of that game plan begin to flourish this past Sunday as they ran for 173 yards and controlled the line of scrimmage in a stunning 21-3 victory over Tom Brady and the Tampa Bay Buccaneers despite trading running back Christian McCaffrey — the team’s best player and focal point of the offense — to the San Francisco 49ers earlier in the week.

Chuba Hubbard started and ran for 63 yards and a touchdown before leaving with an ankle injury and D'Onta Foreman added 118 yards on the ground as the Panthers gave their overworked defense some much needed rest on the sideline.

The seeds of Sunday's successful ground game were planted in Carolina's game the week before against the Los Angeles Rams, even though the Panthers lost 24-10 and failed to score an offensive touchdown.

Wilks said the team set out to establish an identity that day.

“That is the mindset that I wanted to create up front — just blue collar, hard working and pushing the pile," Wilks said. "I thought we did that. Even though the scoreboard wasn’t what we wanted I told the coaches it will help us win games down the road.”

P.J. Walker, who entered training camp as the fourth-string quarterback but has been pressed into duty because of injuries, played efficient football, throwing for 177 yards and two scores against the Bucs.

“I feel like we got the running game going and we were able to open things up for P.J.," said Foreman, who had just 12 carries prior to Sunday.

The Panthers (2-5) suddenly have a shot to move into a tie for first place in the NFC South with a win Sunday at Atlanta and a Tampa Bay loss on Thursday night to the Baltimore Ravens.

After last week's success in the running game, Carolina's offensive line is eager to get back on the field and build off the momentum.

"It was great to see that we took a big step this past week,” right tackle Taylor Moton said. "Now we want to take another step and make it more consistent.”

It won't be easy though.

The Falcons enter the game ranked fifth against the run, and the Panthers aren't sure if they'll have Hubbard, who missed practice Wednesday.

The Panthers are still last in the league in offense, but guard Austin Corbett said he sees the team starting to come together — and only getting better.

“It’s a brand new offense and things take time to click, especially with all of the moving pieces. Things are still happening, right?" said Corbett, who won a Super Bowl with the Rams last year. “To have a game like that and show what we can do is great, but my sense after the watching the tape is there is still more out there to be had.”

Corbett credits offensive line coach James Campen's blocking scheme for the success last week. He called Campen a detail-oriented coach who understands blocking schemes and different angles and how to attack a defense.

“When you have everyone on the same page and communicating and you're working in unison it makes it so much easier," Corbett said.

The win also brought renewed hope in the locker room.

“It was a lot of fun just seeing all of the guys smiling and jumping around and happy for one another,” Foreman said. "Defense, offense, it was great. Having that feeling coming back in the locker room (after the game) and every guy with all of that excitement is something you strive to see every week."