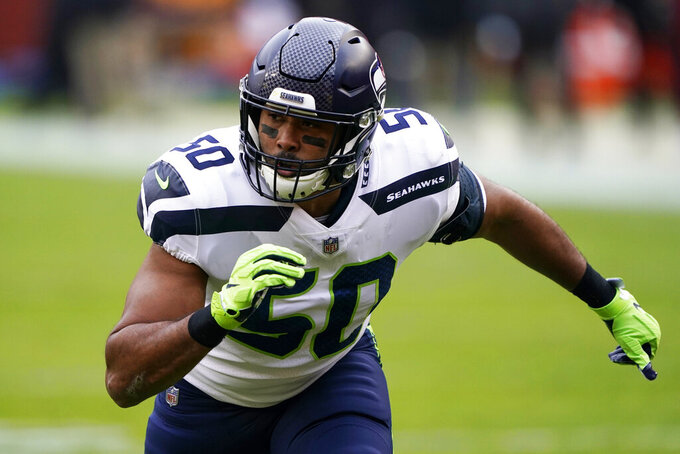 FILE - In this Dec. 20, 2020, file photo, Seattle Seahawks outside linebacker K.J. Wright rushes during the team's NFL football game against the Washington Football Team in Landover, Md. The Las Vegas Raiders have added another proven veteran to bolster their banged-up linebacker group, agreeing to a one-year contract with Wright. A person familiar with the deal says that the two sides reached the deal on Thursday, Sept. 2. The person spoke on condition of anonymity because the contract can't be signed until after Wright passes a physical. (AP Photo/Mark Tenally, File)

The Las Vegas Raiders have added another proven veteran to bolster their banged-up linebacker group, agreeing to a one-year contract with K.J. Wright.

A person familiar with the deal says that the two sides reached the deal on Thursday. The person spoke on condition of anonymity because the contract can't be signed until after Wright passes a physical. Journalist Josina Anderson first reported the signing on her Twitter account.

Wright has been one of the most dependable linebackers in the league since being drafted by Seattle in 2011. His 54 passes defensed are the fourth most of any linebacker over his 10-year career. Wright had 86 tackles, 10 passes defensed and 11 tackles for loss last season when he was the only player to reach double digits in those last two categories.

Wright is the second experienced linebacker with ties to defensive coordinator Gus Bradley that the Raiders have added after losing starter Nicholas Morrow (foot) and backup Javin White (knee) to injuries during the exhibition season.

Las Vegas also completed a trade with Carolina for Denzel Perryman and will have both of those players to team with Cory Littleton and Nick Kwiatkoski to open the season.

Perryman and Wright both played for Bradley with Perryman doing it the past four seasons for the Chargers and Wright in his first two years in Seattle.

That familiarity should help speed up their integration into the team with Perryman providing a good run-stopper in the middle and Wright playing on the outside.

“You’re the leader. You’re the quarterback of the defense," Perryman said of his role. "Everybody feeds off you. You got to make sure everybody’s in the right place. If the defense is not running the way it’s supposed to, the coaches are going to come to you. I’ve been in the defense for four years, I am a little comfortable. There’s still things that you do learn. Coach Gus will tell you, ‘You never got it.’”

The Chargers selected Perryman in the second round in 2015 and he was a dependable insider linebacker for them the past six years. He had 349 tackles, 26 tackles for loss and five sacks in 69 career games.

Perryman practiced only once in Carolina before the trade because of injuries. He also has not received the COVID-19 vaccination but is considering changing his plans in order to be able to bond better with his teammates.

“It’s too much restrictions going on," he said. "Can’t even eat with my fellow brothers. I don’t like being an outcast.”

The Raiders created some room on their 53-man roster by placing Morrow, White, running back Jalen Richard (foot) and cornerback Keisean Nixon (leg) on injured reserve. They are all eligible to come back after missing three games.

Carrier is entering his fourth season with the Raiders and ninth in the NFL and is a key part of Las Vegas' special teams.

Leavitt is entering his third season with the Raiders with nine tackles and two passes defensed in 26 career games.

Eluemunor has played 39 games with 11 starts in four seasons with Baltimore and New England.