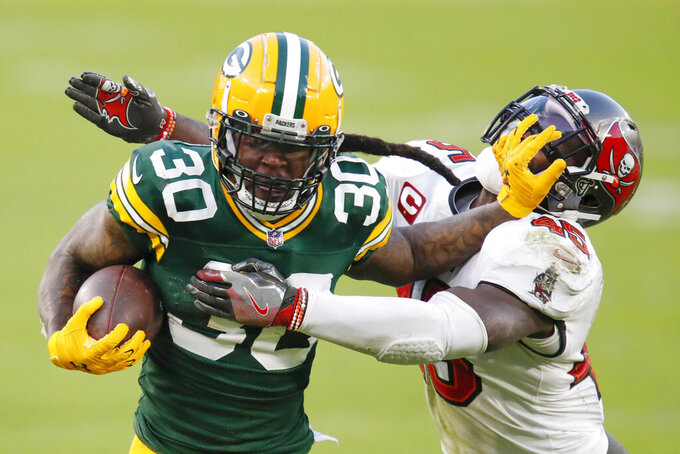 FILE - Green Bay Packers' Jamaal Williams pushes off Tampa Bay Buccaneers' Devin White during the second half of the NFC championship NFL football game in Green Bay, Wis., in this Sunday, Jan. 24, 2021, file photo. A person familiar with the situation says running back Jamaal Williams has agreed to sign with the Detroit Lions The person spoke Wednesday, March 21, 2021, on condition of anonymity because the team had not announced the deal. (AP Photo/Matt Ludtke, File)

The rebuilding Detroit Lions have bolstered their backfield in free agency in one of a series of moves by first-year general manager Brad Holmes.

Running back Jamaal Williams agreed to sign with the Lions, according to a person familiar with the situation. The person spoke Wednesday on condition of anonymity because the team had not announced the deal.

Holmes agreed to a second trade with his former employers, the Los Angeles Rams, and acquired steady defensive tackle Michael Brockers to help one of the NFL’s worst defenses. Brockers effectively replaces defensive tackle Danny Shelton, who was released Tuesday.

Days after he agreed to a $39 million, three-year contract, the team announced defensive end Romeo Okwara signed a contract extension on Wednesday.

Instead of seeing how much his pass-rushing skills were worth on the market coming off a 10-sack season, Okwara simply wanted to keep playing with his brother, Julian, another defensive end on the team.

“It was a pretty simple decision, being able to play with my brother and continue a vision we have and what we want to get done in the city in Detroit," he said on a Zoom call with reporters. “That was very important to me. We were able to get something done pretty quickly.”

Green Bay drafted Williams out of BYU in the fourth round in 2017 and he had a solid run with the team. He had 1,985 yards rushing and 10 touchdowns, nearly 1,000 yards receiving and eight scores in his career that includes 20 starts over four seasons.

Williams started in three of 14 games last season. He had 505 yards rushing and two touchdowns and 31 receptions for 236 yards and a score.

The Lions selected Reeves-Maybin in the fourth round in 2017. He has 59 tackles in 55 games, playing mostly on special teams.

Former general manager Bob Quinn gave Trufant a two-year, $21 million deal last year that included $14 million guaranteed. Trufant ended up joining a long list of Quinn's free agent additions that didn't pan out. Injuries limited the 30-year old cornerback to six games and one interception last season after he started in 97 games and had one Pro Bowl season for the Atlanta Falcons.

Detroit is in the midst of another retooling project, giving Holmes and first-year coach Dan Campbell a chance to turn around a team that lost a total of 33 games the previous three years. Holmes and Campbell have a long-term vision to build a winner, an elusive goal for a franchise with only one playoff victory since winning the 1957 NFL title.

The Lions chose to let standout receiver Kenny Golladay go on the market after deciding not to sign him to a long-term deal or use the franchise tag to retain him for at least another season.

Okwara, though, is optimistic about the team's direction.

“I think we're building something really special here," he said.