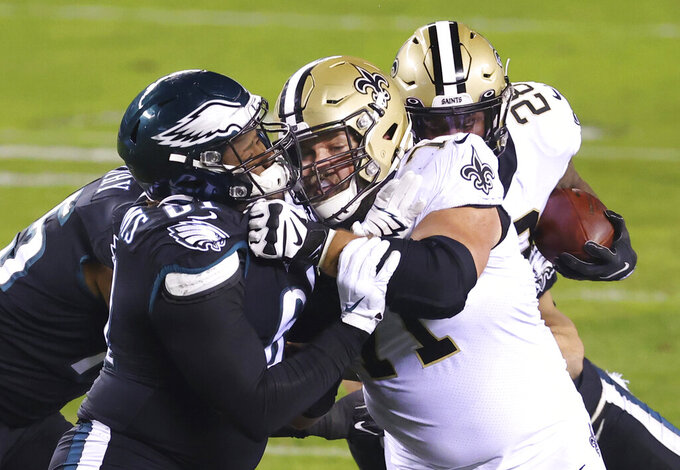 FILE - Philadelphia Eagles' Raequan Williams, left foreground, battles New Orleans Saints' Ryan Ramczyk, center, during an NFL football game in Philadelphia, in this Sunday, Dec. 13, 2020, file photo. Saints right tackle Ryan Ramczyk has agreed to a five-year extension worth up to $96 million, a person with knowledge of the situation said. The person spoke to The Associated Press on Wednesday, June 30, 2021, because the new contract for the 2019 All-Pro offensive lineman has not been announced. (AP Photo/Rich Schultz)

NEW ORLEANS (AP) — Saints right tackle Ryan Ramczyk, who once quit football during college to pursue a career in welding, has agreed to a five-year contract extension making him one of the highest-paid offensive linemen in the NFL.

“It’s a huge relief," Ramczyk said on a video conference call hosted by the Saints after he'd agreed to his new contract. "Extremely happy with how everything played out.”

The new contract for the 2019 All-Pro selection is worth up to $96 million, a person with knowledge of the situation said.

The person spoke to The Associated Press on Wednesday because financial terms have not been announced. The person said the extension, which was first reported by ESPN, guarantees Ramczyk $60 million.

While the 6-foot-6, 314-pound Ramczyk did not discuss specifics about financial terms, he acknowledged that it represented one of the most lucrative contracts yet for an NFL right tackle.

“Obviously, it’s awesome. But at the end of the day, I’m going to go out and do what I always do," Ramczyk said. "I’m still me. I’m still going to be the same guy, same work ethic.”

Ramczyk was a late first-round draft choice out of Wisconsin in 2017, five years after he quit football at Division II Winona State and enrolled at Mid-State Technical College with intentions of becoming a welder.

“I was taking the classes to go into it, but I took that year off and I just missed the game of football," Ramczyk recalled. "Ultimately, that had more pull on me and I went back to my hometown D-III school and asked if I could play some football again.”

That hometown school was Wisconsin-Stevens Point, where Ramczyk played two seasons before transferring to Wisconsin and blossoming into a bona fide pro prospect in 2016.

The 27-year-old has now started 63 regular-season games in his four NFL seasons.

Extending Ramczyk's deal was among New Orleans' offseason priorities because he was scheduled to become an unrestricted free agent next year.

The deal helps the Saints secure one of their top blockers for the long term at a time when they are making a transition at quarterback.

Ramczyk's extension also continues a Saints pattern of investing considerably in those who block for an offense that has ranked among the NFL's most prolific since coach Sean Payton took over in 2006.

Of the Saints' five projected 2021 starting offensive linemen, three are first-round draft choices, including Andrus Peat (2015) and Cesar Ruiz (2020). Center Erik McCoy was a second-rounder in 2019. Left tackle Terron Armstead was a third-round find out of Arkansas-Pine Bluff in 2013, who three years later signed a five-year, $65 million extension.

“They’ve dedicated a lot of resources to the offensive line, so it means a lot," Ramczyk said. “We have a really solid group of guys here.”

But the Saints also still have several prominent players on both sides of the ball with uncertain futures beyond 2021.

Armstead, now entering his ninth season, is scheduled to become a free agent next season.

The Saints have placed their franchise tag for this season on safety Marcus Williams, a second-round pick in 2017, and have until July 15 to reach a long-term extension with him.

Marshon Lattimore, the club's first of two first-round selections in 2017, is entering his final season under contract in a year when New Orleans has seen depth at that position thinned by the loss of one starting cornerback — Janoris Jenkins — in free agency.