B for Berrios: Jets WR driven by ultra-competitive edge 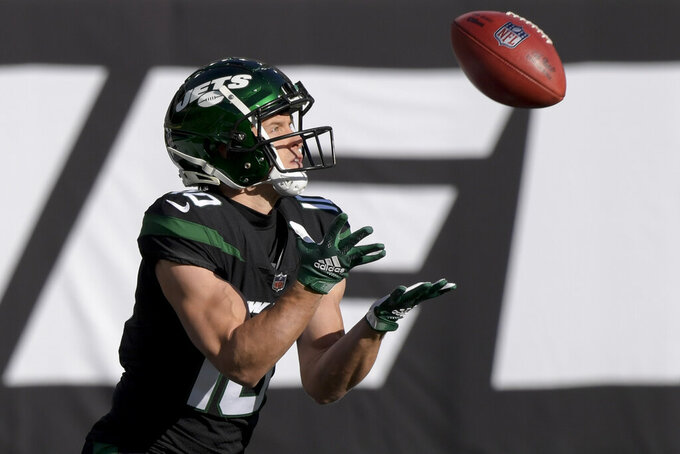 New York Jets wide receiver Braxton Berrios receives the ball on the kickoff during the first half of an NFL football game against the Philadelphia Eagles, Sunday, Dec. 5, 2021, in East Rutherford, N.J. (AP Photo/Bill Kostroun)

FLORHAM PARK, N.J. (AP) — It's still a sore subject for Braxton Berrios, so tread lightly when it's brought up.

The New York Jets wide receiver was a star on the field at the University of Miami and a whiz in the classroom, where he was the valedictorian of the School of Business Administration, a double major in finance and entrepreneurship and an academic All-America with a sparkling 3.96 GPA.

Now, if not for that one B.

“I don’t want to talk about it,” Berrios said with a smile before bowing his head. “It stung. It hurt.”

The one blemish on his academic record came in a finance class in the second semester of his junior year. He declined to mention the specific class or professor, but it was the only grade he received in college that wasn't an A on his way to being the valedictorian in 2017.

“Yeah, it bothered me for a while,” Berrios said. “Luckily I was able to still get that accolade at the end of those four years. But that’s all it was, I had that competitive edge I just never turned off. And then once I smelled it, once I got too close to it, I became obsessed with it — a little bit.”

Berrios takes that approach with everything he does, including football.

At 5-foot-9 and 190 pounds, he's hardly imposing. But he might have the most chiseled physique on the team. He might not be the fastest, but he's arguably the most driven.

“Yeah, he’s got little man’s syndrome, you know? I understand that,” said Mike LaFleur, the Jets' similarly vertically challenged offensive coordinator. “There’s a level of competitor in him, and dog, that he believes he’s the best one when he steps on the field.

"And it’s not something he just tells himself, he truly believes it.”

That's to say failure is never an option for the 26-year-old Berrios, who leads the NFL in kick return average with 28.9 yards per runback — helped by a 79-yard return last Sunday against Philadelphia. He's also among the league leaders with a 13.6-yard average on punt returns, putting himself in the Pro Bowl discussion. Berrios also has 26 catches for 251 yards and a touchdown on offense.

“Whatever, whenever, truly," he said.

“Another one of those model citizens, if you want to call him,” coach Robert Saleh said, “in terms of what professional athletes look like, what a professional athlete who maximizes every ounce of fiber in his body looks like, and that’s what Braxton represents.”

Berrios grew up in the Raleigh, North Carolina, area and was a four-star wide receiver in high school before heading to Miami. He played as a freshman and carved himself a terrific college career on the field, but all the while doing everything he could to also stand out in the classroom.

He started off as an entrepreneurship major and became a double major partly because of a challenge from a football teammate. After his first semester of his freshman year, the coaches were reading out the players' grades during a team meeting. Berrios, of course, had a perfect 4.0 GPA, and one of his fellow wide receivers walked out with him.

“He was actually a finance major and he goes, ‘Yeah, try getting a 4.0 in upper level finance classes,’” Berrios recalled. “So he said that and then the next week I said, ‘You know what?’ And I added finance as a major. True story. That’s how I got into finance.”

Balancing two difficult majors with football in college is far from an easy task. But Berrios was eager to prove he could succeed in both.

After catching 96 passes for 1,121 yards and 14 touchdowns for the Hurricanes, Berrios was a sixth-round pick of New England in 2018. He never played for the Patriots, spending his rookie season on injured reserve before being among their final cuts in 2019.

The Jets claimed him off waivers and he has been a valuable and versatile part of New York's offense and special teams units since.

“He’s just kind of one of those guys that not a lot of people talk about," quarterback Zach Wilson said. "He grinds his butt off every single day and comes in and does his job always. ... Just because people don’t expect a lot out of him, for whatever reason, I don’t feel like he gets the credit he deserves a lot of the time. But he has really done an amazing job and I hope everyone sees that.”

Along with his straight A's for effort, competitiveness and determination.

“I’m somebody that I want to take advantage of every opportunity I get,” Berrios said. "And that’s where my focus is now. Whether I’m the favorite or the underdog doesn’t really matter when the ball’s in the air.”

NOTES: WR Jeff Smith was placed on the COVID-19 list, leaving the Jets even further short-handed at the position entering their game Sunday against New Orleans. Corey Davis was placed on injured reserve earlier in the week, and Elijah Moore (quadriceps) is questionable after not practicing. ... CB Michael Carter II (concussion), RB Tevin Coleman (concussion) and TE Trevon Wesco (ankle) are out. ... RG Laurent Duvernay-Tardif (ankle) is questionable after being limited at practice. DE John Franklin-Myers (hip), TE Ryan Griffin (ankle), LB C.J. Mosley (back) and DT Sheldon Rankins (knee) are also questionable, but expected to play after fully practicing.