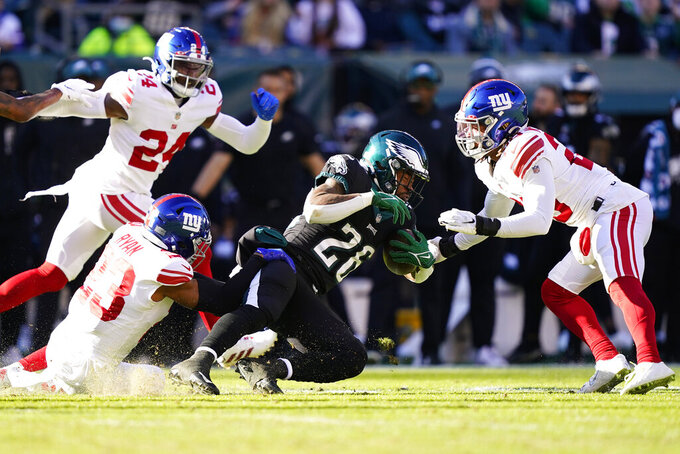 PHILADELPHIA (AP) — The Philadelphia Eagles have the top rushing attack in the NFL, and Sunday they’ll face a Washington defense they gashed for 238 rushing yards 12 days earlier.

But Miles Sanders, who ran for 131 of those yards in a 27-17 win on Dec. 21, won’t play in the rematch after breaking his hand in a victory over the Giants. Also, Jordan Howard, who gained 69 yards on 15 carries against Washington, didn’t practice Wednesday after suffering a stinger against New York.

With rookie running back Kenny Gainwell (ankle) listed as limited in the Eagles’ estimated injury report, that leaves veteran Boston Scott and a couple of practice squad backs, Jason Huntley and Kerryon Johnson, as the only healthy RBs in the stable.

Eagles coach Nick Sirianni said he doesn’t have a timetable for Sanders’ return, but stressed Wednesday that Sanders will not be put on injured reserve, which would require a three-week absence.

The Eagles (8-7) currently hold the seventh and final NFC playoff berth, and a three-week absence would force Sanders to miss the wild-card round if Philadelphia gets there. Sirianni likened Sanders’ injury to one suffered by running back Marlon Mack when Sirianni was a Colts coach two years ago. Mack missed two games.

Sirianni said Howard is “working like crazy to get back and get himself ready for this game.”

Two years ago, in Howard’s first Eagles stint, he went down with what initially was described as a stinger. He ended up missing the next six games, and never carried the ball again that season.

“It’s a separate injury and we’re just treating it that way and trying to get him back for this football game,” Sirianni said.

It’s rare to face an opponent twice in 12 days, let alone a divisional opponent. The first meeting was pushed back two days because Washington had a COVID-19 outbreak. Though Washington won’t have to worry about Sanders this time, and might not have to worry about Howard, quarterback Jalen Hurts is the team’s No. 2 rusher. Hurts was more limited by an ankle injury in the first meeting than he should be this week.

Asked about his ankle on Wednesday, Hurts said: “It feels fine. Been good enough for us to get two wins” since he returned from the injury.

The Eagles need 160 yards over their final two regular-season games to break the team rushing record of 2,607 yards, set when they won the NFL championship behind Hall of Fame running back Steve Van Buren in 1949 in a 12-game season. This is the most prolific running game anyone playing for the team today has seen.

“You have a guy that dynamic, that can do what he can do with his legs, it puts defenses in a bind,” Johnson said.

Despite giving up 238 yards rushing to the Eagles, which might have had to do with several defensive linemen missing practice because of COVID-19 protocols, Washington has the NFL’s eighth-best run defense, allowing 104.2 yards per game.

“They have a really superior, talented D-line,” Johnson said. “Going into this game, I just try to erase … what happened (last time) because I think we’re going to see the very best of them this week.”

NOTES: Johnson, who missed three games dealing with mental health issues, said he was angry about not making the Pro Bowl because he feels he's had his best season. Teammates and coaches agree. The three-time Pro Bowl RT has not allowed a sack.. ... The Eagles activated offensive linemen Andre Dillard and Le’Raven Clark and defensive ends Ryan Kerrigan and Tarron Jackson from their reserve/COVID-19 list. ... The team is holding quarterbacks and specialists meetings remotely as a precaution.