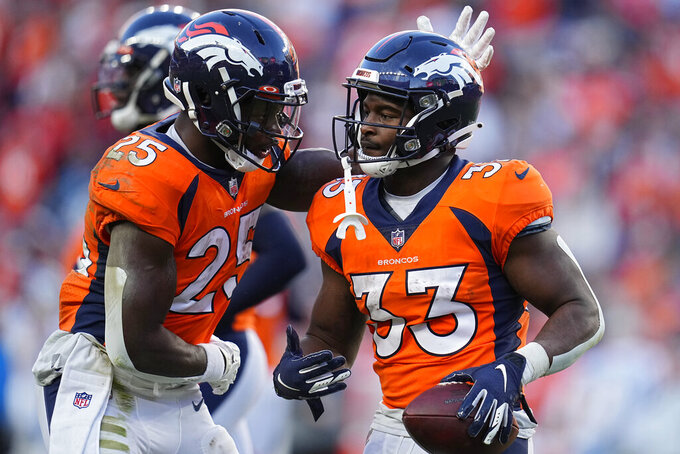 Denver Broncos running back Melvin Gordon (25) celebrates after running back Javonte Williams (33) scored a touchdown against the Detroit Lions during the second half of an NFL football game, Sunday, Dec. 12, 2021, in Denver. (AP Photo/Jack Dempsey)

DENVER (AP) — Broncos receivers Tim Patrick and Courtland Sutton haven't been producing like the $90 million duo they became when they signed contract extensions during their bye week last month.

In three games since, each has five receptions, none for touchdowns, their contributions limited mostly to run-blocking for Melvin Gordon and Javonte Williams.

“At the end of the day, we're winning. That should be the most important thing, no matter how we do it or who has a great game," quarterback Teddy Bridgewater said as the Broncos (7-6) prepared for a visit from the Bengals (7-6), another team jockeying in the logjammed AFC playoff chase.

You haven't heard Patrick or Sutton griping for more throws, and chances are Bridgewater hasn't, either. He said the only game he's watched as a fan this season was the Patriots' 14-10 win at Buffalo in nasty weather last week.

“The quarterback threw the ball three times. You think anyone was in the locker room pouting?” Bridgewater asked. "I’m at that point—and I’m trying to get guys to understand—that it’s hard to win in this league. Whenever you come across those wins, it doesn’t matter how it happens, as long as you win. We celebrate, then we talk about it come Monday. ‘Hey, can I get involved a little more?’

"Our coaches have been doing a great job of trying to get guys involved, but at the end of the day it just comes down to winning.”

Receivers worth their salt — and hefty paychecks — had better be good blockers this time of the year anyway, as the temperatures fall and teams gear up for the playoffs.

“That’s the thing—it’s like, ‘OK, I’m not putting up numbers,’ but you watch Melvin break a run for 15 yards and Court is still blocking the corner on the sideline, helping Mel get an extra five yards. Those guys have been huge in different areas," Bridgewater said.

"Of course, we’d love to get them going in the passing game. It’s a passing league and we want to see the ball in the air. We want to see guys making highlight plays and big plays. However, these wins present themselves, that’s what it’s all about.”

If the pendulum is starting to swing back from the pass-heavy game the NFL has become, Bill Belichick is ahead of the curve, as usual. But teams like the Broncos and Bengals have just the kind of ground game to scamper back into the league's upper echelon themselves.

Gordon and Williams, a rookie who led the nation in broken tackles last year at North Carolina, have combined for 1,909 scrimmage yards and 15 touchdowns. Cincinnati running back Joe Mixon ranks second in the NFL with 1,036 yards rushing and he's run for a dozen touchdowns and caught two TD passes.

Here's a couple of caveats for Sunday's showdown:

—Mixon has been bottled up the last two weeks and starting right tackle Riley Reiff went on IR this week, which could make the yards harder to come by for Mixon.

—Williams missed practice time because of a swollen leg the Broncos said wasn't serious. Still, it could affect Williams' ability to drag defenders downfield like he did at Kansas City earlier this month when all but 11 of his 102 rushing yards came after contact.

Bengals DE Trey Hendrickson has 12½ sacks and if his balky back allows, he could join Chiefs DT Chris Jones on Sunday as the only players since 1982 with a sack in 10 consecutive games. Jones had an 11-game sack streak in 2018.

“Well, we've got one of the best left tackles in the league in Garett Bolles,” Denver guard Dalton Risner countered. “I think he's going to do a great job against Hendrickson. ... Running the ball will help that out a lot."

The Bengals’ last trip to the playoffs was in 2015, the same year the Broncos last made it. But with Cincinnati losing two straight, coach Zac Taylor met with his captains this week.

“I think everybody is still optimistic. They all know we have a good team,” Taylor said. “We have to find ways to handle our business and get some wins here. But it’s not doom or gloom.”

Broncos tight end Noah Fant has started to become more of a two-dimensional tight end with his improved blocking of late. But his receiving skills — he leads the team with 53 catches — could come back into focus Sunday, especially after making a nifty 32-yard grab last week that drew praise from coach Vic Fangio.

Bengals WR Tee Higgins has three 100-yard games in a row after playing in the shadow of star rookie Ja’Marr Chase most of the season.

Quarterback Joe Burrows said Higgins is “really becoming one of the premier receivers in the league. Really excited about hopefully the next 10 years we can play together.”

As for his sore and swollen pinky on his throwing hand, which he dislocated two weeks ago, Burrows said it felt “good enough to play” Sunday.