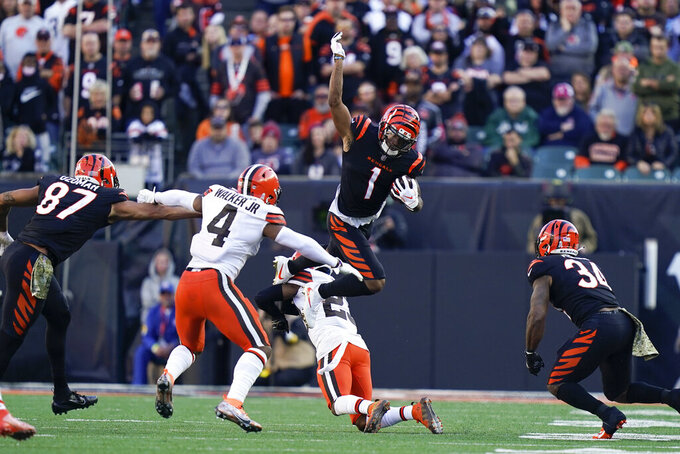 BETTING LINE: Bengals by 1, according to FanDuel SportsBook.

TURNOVER DIFFERENTIAL: Bengals minus-4; Raiders plus-1.

BENGALS PLAYER TO WATCH: Rookie WR Ja’Marr Chase is tied for the NFL lead with six receptions of at least 40 yards. He has a TD in two of the past three games and has five games with at least five catches. Chase leads all rookies in yards receiving (835) and TD catches (seven).

RAIDERS PLAYER TO WATCH: WR Bryan Edwards has taken on a bigger role in the absences of Henry Ruggs III and showed some flashes last week. He had three catches for 88 yards and a TD.

KEY MATCHUP: Bengals RT Reilly Reiff vs. Raiders DE Maxx Crosby. Reiff will have his hands full with Crosby, one of the most effective edge rushers this season. Crosby leads the NFL with 63 pressures, according to Pro Football Focus, and had four sacks in his last game against the Bengals.

SERIES NOTES: The Bengals are 2-15 on the road against the Raiders with the only wins coming in 2015 and 1988. ... Raiders RB Josh Jacobs ran for 112 yards in the last meeting two years ago in Oakland. ... The Raiders have been held to 20 points or less in the past six outiing against the Bengals. ... The teams have met twice in the postseason with the Raiders winning in the 1975 season and the 1990 season. ... The game in the 1990 season was the final one of Bo Jackson's NFL career and started an eight-game postseason losing streak for the Bengals that is tied for the second longest in NFL history.

STATS AND STUFF: Cincinnati dropped games to the Jets and Browns heading into the bye last week. ... The Bengals are 5-13-1 after the bye since 2002. Only the Raiders have a worse record at 4-16. ... Cincinnati has scored on 21 of 24 trips to the red zone (87.5%), with 16 touchdowns and five field goals. That’s fifth best in the NFL. ... The Bengals are best in the NFL in the “middle eight” -- the last four minutes of the first half and first four minutes of the second — with a plus-26 point deferential in those stretches. .... Cincinnati is third in the league in passing yards per play (8.81) and fourth in offensive yards per play (6.0). ... Bengals QB Joe Burrow has nine pass plays of 40 yards or more, second best in the league. He’s tied for fourth with 20 TD passes. ... Bengals RB Joe Mixon is tied for fourth in the NFL with seven rushing TDs. ... Bengals DE Trey Hendrickson leads the team in sacks with 8 1/2. ... Hakeem Adeniji is the fourth player to start at right guard for the Bengals this season. ... The Raiders have lost back-to-back games following a 5-2 start. ... Las Vegas has been held to 16 points or fewer in four of the past six games. ... The Raiders allowed the Chiefs to score on seven of eight drives last week, excluding a kneel down at the end of the game. ... Las Vegas has converted 30.9% of third downs the past seven weeks, the worst mark in the NFL in that span. ... The Raiders were held without a sack for the first time this season last week. ... Las Vegas committed five turnovers the past two games after having only five in the first seven. ... The Raiders have allowed a league-high 12 fourth-down conversions.

FANTASY TIP: After TE Darren Waller had only four catches on seven targets for 24 yards last week, the Raiders will likely make it a priority to get Waller involved early this week.