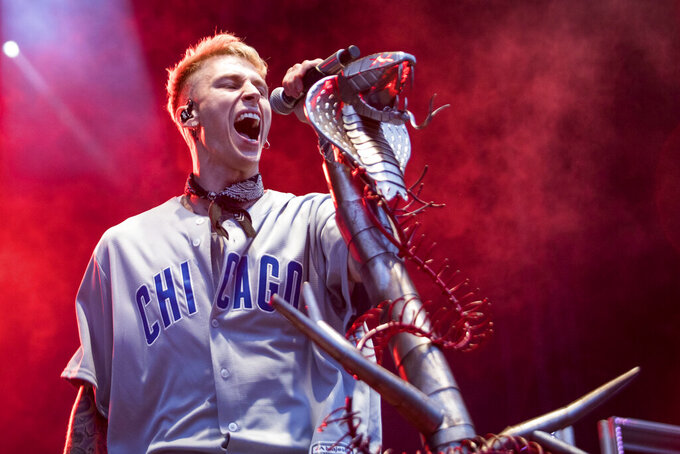 FILE - Machine Gun Kelly performs at Wrigley Field in Chicago, in this Saturday, Sept. 8, 2018, file photo. Grammy Award nominated rock & soul duo Black Pumas and Cleveland's own Machine Gun Kelly will perform at next week's NFL draft. The league announced its musical acts for the second and third days of the draft, which is back on the road after being all virtual last year due to the COVID-19 pandemic.(Ashlee Rezin/Chicago Sun-Times via AP, File)

The league announced its musical acts for the second and third days of the draft, which is back on the road after being all virtual last year because of the COVID-19 pandemic.

A massive stage has been constructed near FirstEnergy Stadium and the Rock & Roll Hall of Fame to host the three-day event from April 29 to May 1.

Black Pumas will perform after the third round is completed on April 30. Their self-titled debut album was nominated as Album of the Year at the 2021 Grammy Awards.

Machine Gun Kelly, who graduated from Shaker Heights High School on Cleveland's east side, will close the festivities the following day.

Rockers Kings of Leon will help kick off the draft on April 29 before Commissioner Roger Goodell tells the Jacksonville Jaguars they are on the clock with the No. 1 overall pick.

By The Associated Press an hour ago
18 hrs ago
By Teresa M. Walker 20 hrs ago
By Mark Long 21 hrs ago
By Steve Reed 24 hrs ago