Broncos rookie Browning has long road ahead after leg injury 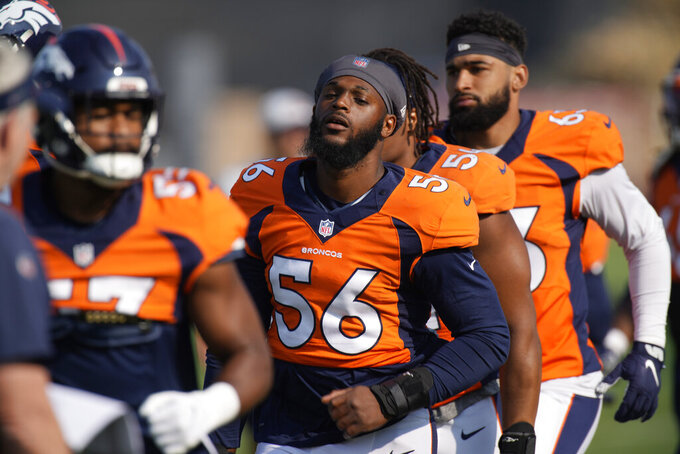 ENGLEWOOD, Colo. (AP) — Rookie linebacker Baron Browning doesn't want to talk about his leg injury, contemplate how missing three months will adversely affect his first season in Denver or even ponder how much catching up lies ahead.

“Everything for me is just staying in the moment and being where my feet are at,” Browning said Tuesday after his first full-padded practice of training camp.

Those feet are finally on the Broncos' practice field much to the joy of his teammates and much to the relief of general manager George Paton, who selected the 6-foot-3, 240-pound linebacker in the third round of the draft to bolster the Broncos' pass defense over the middle.

Coach Vic Fangio couldn't wait to get his hands on the versatile Ohio State star who oozes the kind of athleticism and playmaking prowess to elevate the Broncos' already stout defense.

Browning, however, got injured during rookie minicamp and had a setback during rehab that delayed his return by several weeks.

The injury to his right leg has been somewhat of a riddle, and Browning, who wore a knee brace at times during his recovery, shed no light on the matter in his first interview since getting hurt.

“I really don’t want to get into specifics,” he said. “It was just something in my right leg and rehab was going pretty good, then just had a little setback. So, had to wait for that to kind of calm down.”

Fangio hasn't said exactly what Browning was dealing with, either, although in June he said it was "more of a bone thing than a ligament thing."

He also called Browning's injury the biggest setback of Denver's offseason but was optimistic he'd be back by the start of training camp.

“Yeah, it definitely was frustrating because I thought the same timeline,” Browning said.

Enough of the negative, though.

“I’ve been out three months, pretty much just watching everything, from OTAs to the beginning of fall camp. So, it just feels good to be back out there moving around," Browning said.

When Browning returned this week, Fangio was asked how quickly Browning can get back up to speed and his response seemed a mixture of hope and exasperation.

“He just needs to get out there and play and execute in our defense,” Fangio said. "You know, this is a guy who had two practices in our rookie minicamp. So, that kind of illustrates how far behind he is.”

Browning isn't thinking about any of that.

“I'm really just trying to get back in the groove of things,” he said. “It's only my second day out here, so I don't know when they plan on playing me.”

Attending meetings kept him tuned in to the Broncos' defensive scheme.

"But no matter if you're in meetings for three months, nothing is the same as being out here,” Browning said. “For me, I just need reps.”

Browning has bided his time this summer watching fellow rookies shine, including the three players selected ahead of him in the 2021 draft — cornerback Pat Surtain II, running back Javonte Williams and O-lineman Quinn Meinerz — but also seventh-rounder Jonathan Cooper, a fellow Buckeyes linebacker who's had a terrific training camp.

“I wouldn't expect anything less from Jonathon. He's a great player and he's a great teammate,” Browning said.

That's exactly what Browning hopes to prove if he can stack one healthy day after another.

Asked how much he pines to get into a game and show everyone what he can do, Browning said, “I can show you how eager I am. I'll tackle you right now.”

“Nah. I'm eager. But like I said, I'm just trying to stay in the moment and not get too ahead of myself and just keep focusing on my craft and getting better every day.”

Whatever his injury was, Browning said he's feeling fine now.

“It's just knocking off that rust," he said. “I kind of asked Coach Vic during one of the water breaks if he had some WD-40 on him so I could just kind of grease my body back up.”

Browning gave a shout-out to pass rusher Bradley Chubb for helping him get through his rehab.

“He was a person I could lean on, would invite me over. You know, he was dealing with a little something, too," Browning said of the Pro Bowl pass rusher who had ankle surgery in the offseason. “So, we kind of leaned on one another."

Chubb's been back for a while now but he had a big smile when Browning finally laced up the shoulder pads and joined him at practice.

“It was huge to see him out there running around, making plays and feeling comfortable again."