Browns' Mayfield not focused on money after Allen's big deal 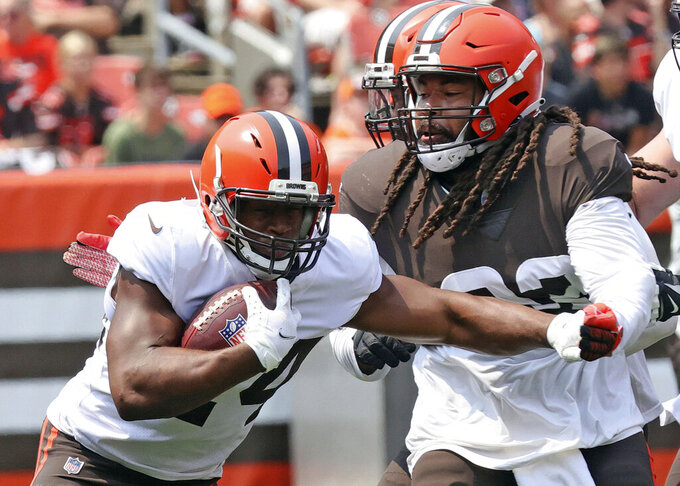 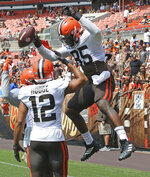 With Buffalo quarterback Josh Allen signing a six-year, $258 million extension, a deal that includes $150 million guaranteed and $43 million per season, it would be understandable if Mayfield wasn't thinking about his own possible future pay day.

Cleveland's quarterback is also eligible for an extension, but swears it's not on his mind.

Mayfield's agents, Tom and Jack Mills, have not had any serious negotiations with the Browns to this point on the future of the 25-year-old QB, who is under contract through the 2022 season.

It's possible talks could take place in the near future, and Browns general manager Andrew Berry recently said he wasn't opposed to discussions carrying into the season.

Mayfield doesn't have any opinion on when they should take place.

“I’m not doing the negotiations, so quite frankly, I don’t give a damn,” he said. “I’m worried about winning Week 1 and going onto Week 2 and focusing on that week one week at a time.

"That’s my mindset, so no matter how many times I get asked this question throughout the year, it’s going to be the same answer, because that’s just the truth.”

The Browns don't need to rush into anything.

They picked up Mayfield's fifth-year option worth $18.8 million on his rookie contract, and the team may want to see if he can repeat his strong 2020 season before making a significant long-term commitment.

From all appearances, the Browns believe in Mayfield vice versa for the No. 1 overall pick in 2018. He finally has stability in Cleveland, and in Kevin Stefanski, his third full-time coach in his first three seasons, someone he can grow with.

Stefanski hasn't seen Mayfield affected by the fringe chatter about his contract.

"I see him locked in,” Stefanski said. “I think our guys are professionals. They understand there’s a business side to this, but we keep it focused on practice, on the meeting room, that type of thing.”

Allen's situation in Buffalo is similar to Mayfield's in Cleveland.

The No. 7 pick in 2018, Allen has helped turn around the Bills, who rewarded him with a franchise-altering contract — the second-largest in NFL history — that could be surpassed by one for Mayfield and Baltimore's Lamar Jackson who is also eligible for an extension.

“I’m very happy for Josh,” Mayfield said. “I think Josh is a great guy. Going through that (draft) process with him, I’m very happy for him. He’s in a tradition-rich town like Buffalo, they’re lucky to have a quarterback like him that cares about it, lives that same mindset that they do up in Buffalo.”

Mayfield was asked what he thinks when hears those kind of numbers.

“I’m worried about winning, I think the rest will take care of itself,” Mayfield said. “It’s good for the quarterback position overall. I’d be lying if we said otherwise.”

As Mayfield began his post-practice interview, fans in the nearby seats chanted “Baker! Baker!”

If there was any doubt about how feverish Browns fans are for this season, thousands of them ignored announcements to shelter in place when thunderstorms rolled through the area and delayed the start by 40 minutes.

“This was incredible,” Stefanski said. “Not surprised. This is a uniquely loyal fanbase, and I appreciate that.”

NOTES: Hall of Fame coach Tony Dungy, who is in the area for induction ceremonies in Canton, addressed the team on the field following the workout. Stefanski has known Dungy for years. Mayfield said Dungy's message was "about not being outworked, doing your job and doing it at a very, very high level. It is just a great message from somebody like that who has done it before.”... Second-year TE Harrison Bryant had a strong day with a pair of TD catches. ... CB Denzel Ward was sidelined for the second day in a row, but Stefanski called it normal rest. ... Stefanski said S Grant Delpit has been dealing with a hamstring problem. He miss his rookie season after tearing an Achilles tendon.