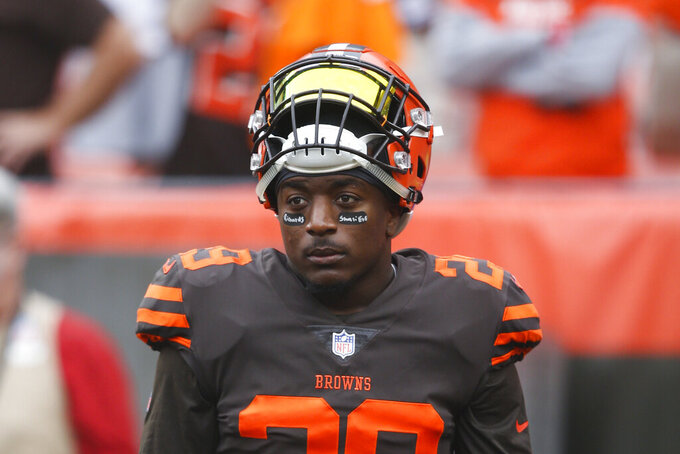 CLEVELAND (AP) — Duke Johnson got his wish, and the Browns got more than expected for him.

Cleveland traded the disgruntled running back to the Houston Texans on Thursday for an undisclosed 2020 draft pick. A person familiar with the deal told The Associated Press that the Browns are getting a fourth-round pick that can become a third-rounder.

The person spoke on the AP condition of anonymity because the teams are not providing details of the swap.

One of the NFL's most versatile backs over the past four seasons, Johnson had grown unhappy with his role and asked to be traded earlier this year after the Browns signed suspended free agent running back Kareem Hunt, who will sit out the season's first eight games.

Browns general manager John Dorsey had been adamant he wasn't going to "give away" the 25-year-old Johnson, and he resisted several offers before striking a deal with the Texans.

Houston was looking for a proven backup to play behind starter Lamar Miller. The Texans released D'Onta Foreman earlier this week.

Johnson, who has been sidelined for much of training camp with a hamstring injury, is a shifty runner, solid at blitz protection and can play some wide receiver if the Texans need him to.

Miffed by what he called the Browns' lack of loyalty toward him, Johnson skipped the team's voluntary offseason program. In June, he doubled down on his trade request, saying loyalty "is not a one-way street."

During his public rift with the Browns, Johnson changed agents and hired Drew Rosenhaus, who met with Dorsey at the start of training camp.

With Johnson gone and Hunt out until November due to an NFL suspension for two violent incidents, second-year back Nick Chubb will get the majority of carries.

However, depth is a concern for the Browns, who have been impressed with Dontrell Hilliard, who signed as an undrafted rookie last season and showed promise while appearing in 11 games.

Johnson was drafted in the third round in 2015 after starring at Miami, where he is the school's career rushing leader. He ran for 1,286 yards, caught 235 passes for 2,170 and scored 13 touchdowns for some bad Browns teams.

He was dependable, but Cleveland's coaching staffs never figured out how to best use the 5-foot-9, 210-pounder, who fought for every yard. Johnson was named the team's MVP in 2017, when the Browns went 0-16, but his stats dipped dramatically last season — 40 carries vs. 82 the previous year — when Chubb got the bulk of work as a rookie.

Johnson's trade removes a possible distraction for Freddie Kitchens in his first year as coach. Johnson's status was an ongoing drama, and the back's hard stance didn't sit well with several teammates, including quarterback Baker Mayfield, who called him out publicly and said he hoped Johnson could "do his job."