Browns' Watson back from NFL ban, clear to start in Houston 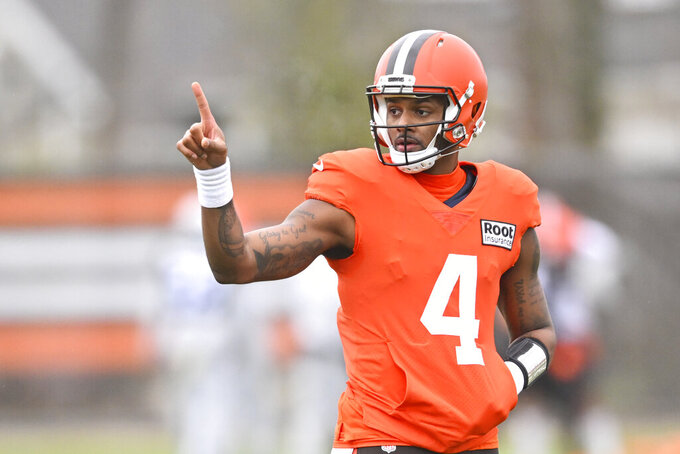 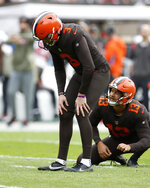 CLEVELAND (AP) — Deshaun Watson won't have a playbook for everything that lies ahead.

The practices, meetings, film work, making handoffs, throwing passes for the Browns, all of that will be easy, second nature. The rest: protesters, heightened scrutiny and pointed questions, will be unscripted.

There's no blueprint for the once-revered quarterback now reviled in some circles.

Cleveland's controversial, $230 million QB was officially reinstated Monday by the NFL after serving his 11-game suspension for sexual misconduct allegations made by more than two dozen women.

Watson's return wasn't accompanied by any fanfare, simply a posting on the league's personnel notice.

He's now a starter again and poised to make his regular-season debut for the Browns on Sunday, coincidentally, in Houston, where he began his pro career and quickly rose to stardom before off-field decisions knocked him off course.

The 27-year-old quarterback isn't starting over, but anew.

He's coming back to the Browns (4-7), who are clinging to the hope that he can lead them to the playoffs despite his long layoff.

Browns coach Kevin Stefanski believes Watson, who returned to practice two weeks ago, is ready for what will be his first game in 700 days — and whatever's next.

"I have confidence in Deshaun based on his preparation and, really, the focus is on just him doing his job,” Stefanski said a day after the Browns rallied for a 23-17 overtime win against Tampa Bay. "We’re still gonna be all about the team effort, still offense, defense and special teams. So this is never, ever gonna be about one person.

“But as it relates to Deshaun, I believe in his preparation, I believe that he worked really hard on a bunch of things to be ready to go.”

In August, Watson ended months of legal entanglements by agreeing to the suspension, a $5 million fine and to undergo professional counseling and treatment after an independent arbitrator ruled he violated the league’s personal conduct policy.

Watson was accused of being sexually inappropriate with the women during massage therapy sessions. The three-time Pro Bowler has long maintained he didn't harass or assault any of the women, some of whom said he forced them to have sex.

While his return to Houston could be hostile, Stefanski said the Browns didn't consider delaying Watson's return. They didn't send three first-round draft picks to the Texans for him to watch.

Their wait is over. It's time for Watson to be a franchise quarterback.

"Deshaun is gonna come in and be Deshaun,” wide receiver Amari Cooper said Sunday. “We’ve seen that greatness on display a multitude of times. So can’t wait for him to get back, can’t wait to practice with him. Can’t wait to catch some balls from him.”

The derided defense rebounded against Tom Brady and the Buccaneers.

With All-Pro end Myles Garrett leading the way with 1 1/2 sacks while playing through a painful shoulder injury, Cleveland's defense came up with big stops when needed in one of its best games in week.

After giving up a touchdown in the third quarter, the Browns held the Bucs to 92 yards and forced six punts.

How about some consistency?

One week, the Browns look like legitimate playoff contenders. The next, they're almost completely inept.

Stefanski has been puzzled by his team's inability to string together good quarters, let alone good games. But Sunday's performance — along with Watson's return — could give the Browns a perfect jolt heading into December.

He was credited with four pass breakups and didn't allow Bucs wide receiver Mike Evans a catch on the seven passes that were targeted to him with Emerson in coverage.

Rookie kicker Cade York missed his sixth field-goal attempt, this one a 39-yarder that had no chance.

York did convert on a 51-yarder, but the Browns were counting on better production from the fourth-round pick. Stefanski wanted to speak with York before making any comment about the latest misfire.

Garrett could barely get dressed after aggravating a left shoulder sprain sustained two months ago when he flipped his car while speeding. Garrett acknowledged he may need surgery, and it's not out of the question the Browns will give him a week off to rest. ... CB A.J. Green is in concussion protocol after making a tackle in the first quarter. ... Stefanski said Newsome, who has missed the past two games, is trending toward a return.

218 — Consecutive wins for Brady in games his team has led by seven points or more with two minutes left. The Browns ended that streak by scoring with 32 seconds left in regulation and winning with 19 seconds left in OT.

The Watson era begins against the hapless Texans (1-9-1), who may be the perfect opponent for him to shake off any rust.