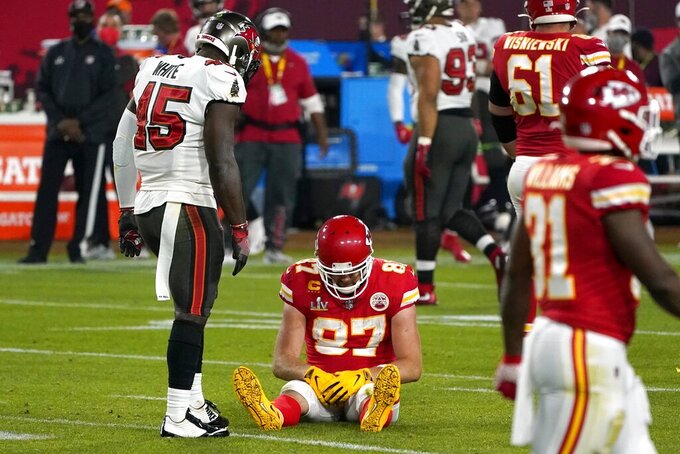 Overwhelmed by Patrick Mahomes and Tyreek Hill during a loss to Kansas City in Week 12 of the regular season, a young Buccaneers secondary flipped the script in Sunday night’s NFL championship game by shutting down the Chiefs’ electric duo in a 31-9 victory.

Rookie safety Antoine Winfield Jr., and second-year linebacker Devin White had the team’s sixth and seventh interceptions of a postseason run that also included wins over future Hall of Famers Drew Brees and Aaron Rodgers, and the Bucs limited Kansas City’s high-scoring offense to 350 yards and no touchdowns, quite the turnaround from a poor performance in what wound up being Tampa Bay’s final loss of the season.

“I think he got a little tired hearing how unstoppable they were,” Arians said.

“He had a great plan to keep them in front of us and give the guys up front time to hunt,” Arians added. “They chased him around pretty good.”

Hill had 13 receptions for 269 yards and three touchdowns in the regular-season matchup, including seven catches for 203 yards and two TDs in the first quarter alone, when the speedy receiver took advantage of single coverage to help Kansas City build a 17-point lead.

Mahomes went 26 of 49 for 270 yards and was sacked three times Sunday night after throwing for 462 yards without an interception in the first meeting. The 2019 league MVP failed to throw for at least one TD for the first time in 31 games, including playoffs.

“There was nothing that was gonna stop us from winning this game. I knew we was going to keep the pressure up,” linebacker Shaquil Barrett said.

“I did not think we was going to keep them from scoring a touchdown but we stepped up, we showed up, we held them to three every time they was down there,” Barrett added, “and Coach Bowles had a great game plan. We had the guys up there to make it work and we made it work, baby.”

Travis Kelce finished with 10 catches for 133 yards for the Chiefs, but Hill was held to 73 yards on seven receptions while bracketed by double coverage much of the night.

“We took away some of the underneath throws, and it takes time for guys get deep. That allowed guys up front to get after him,” Bowles said. “The biggest thing we were trying to do was take away his first read, make him hold the ball to look at (the defense) long enough to get after him.”

The 27-24 setback on Nov. 29 finished a stretch in which the Bucs dropped three of four games — all at home — to enter their bye week searching for answers to their inconsistency on both offense and defense.

The team didn’t lose again, finishing on an eight-game winning streak that included playoff road wins over Washington, New Orleans and Green Bay to become the first team to play a Super Bowl in their home stadium.

Brees and the Saints beat Tampa Bay twice during the regular season. By taking down Mahomes in the Super Bowl, the Bucs (15-5) avenged three of their five losses.

The steady improvement of the defense down the stretch was one of the biggest reason they were confident Sunday’s result would be different.

“It was very personal,” cornerback Sean Murphy-Bunting said. “As a secondary, we had some rough patches, just like every other team. It just seemed like we took a little more heat, people saying we weren’t good enough.”

White said he and the rest of the defense couldn’t understand how Tampa Bay was considered underdogs Sunday night after taking down Brees and then Rodgers.

He also took exception with Tampa Bay having only one Pro Bowl selection on its roster, linebacker Jason Pierre-Paul.

“That doesn’t even sound right,” White said. “One Pro Bowl player and the team goes on to win the Super Bowl? That’s OK. That trophy, the Lombardi, that’s what we play for.”