Bumbling Bengals look to 'flush away' bad loss to Browns 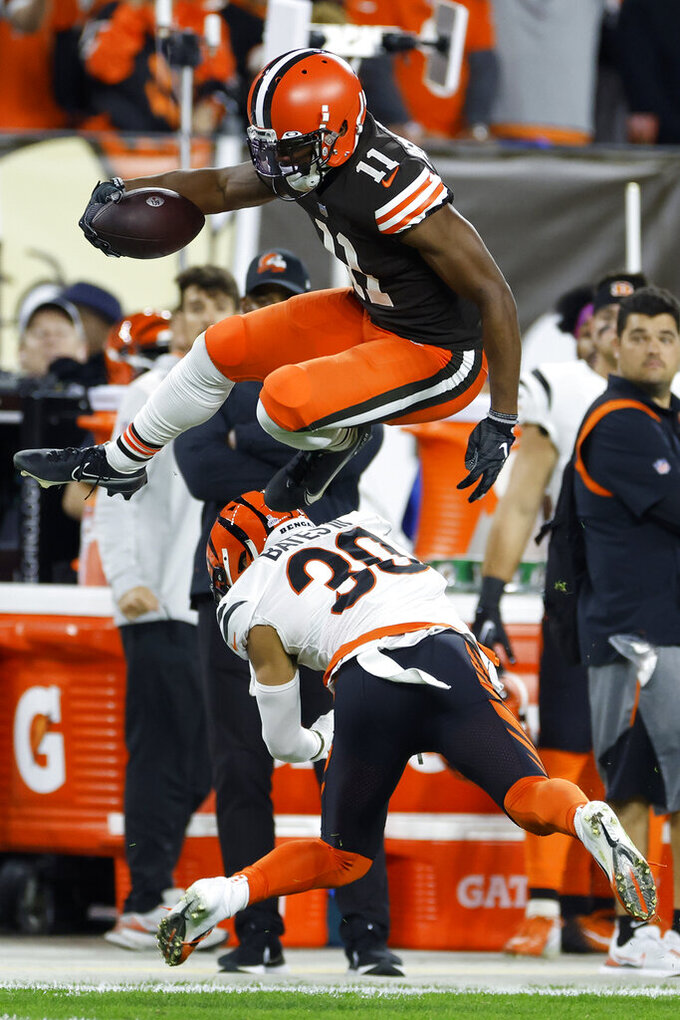 CINCINNATI (AP) — Playing without Ja’Marr Chase, the Cincinnati Bengals had a rough night.

One that could have ramifications for the rest of the season.

Cincinnati lost its best cornerback when Chidobe Awuzie departed in the first half of Monday's ugly 32-13 loss at Cleveland because of a right knee injury. The 27-year-old Awuzie left the stadium on crutches, and coach Zac Taylor said the injury appears to be severe.

If Awuzie is sidelined for an extended period, it's another tough blow for a Bengals team already playing without Chase because of a hip injury for the dangerous wide receiver.

The growing list of health issues is one of several problems for Cincinnati (4-4), which dropped to 0-3 in the AFC North with its eighth loss in the past nine games in the “Battle of Ohio.”

The Bengals were limited to two fourth-quarter touchdown passes by Joe Burrow in the loss to Cleveland. They managed just 36 yards on the ground, compared to 172 for the Browns, and Burrow was sacked five times.

Evan McPherson missed a 47-yard field goal attempt and an extra point, and Cincinnati’s defense allowed three second-half touchdowns after holding its opponent without a second-half TD in its first seven games.

The Browns (3-5) had lost four straight games before hosting the Bengals in front of an amped-up crowd.

“This isn’t the type of team we are,” Taylor said. “It’s a 17-game season, and this is one game. We weren’t at our best, in any phase. I’m confident that’s not who we are, and we can make the corrections and flush this one away quickly.”

Burrow threw an interception on Cincinnati's first drive. He also lost a fumble in the second quarter.

“We're a better offense than we put out there tonight, even without (Chase),” Burrow said.

Not much, actually. The yards are getting harder to come by for Mixon on the ground, but he did stay engaged as a receiver and picked up some tough yards after his catches. He had a team-high seven receptions for 32 yards as Burrow distributed passes to nine different receivers.

The Bengals faltered behind an offensive line that was overhauled before the season but still lacks consistency and push. Tackle Jonah Williams allowed two first-half sacks that ended drives. With Chase out, Burrow struggled to make explosive plays.

“We weren’t playing collectively,” said receiver Tyler Boyd, who had three catches for 38 yards and a TD. "We couldn’t get that catch to get the offense going. We didn’t protect Joe well. Everything was not going our way.”

Defensive end Sam Hubbard had nine tackles, including a sack, and two quarterback hurries. Hubbard and Trey Hendrickson are getting pressure, but the interior defensive line isn't the same without D.J. Reader and Josh Tupou, both out with injuries.

Burrow, after throwing for a season-high 481 yards in the win over the Falcons, had a terrible game. It wasn't his worst statistically — 232 yards, two TDs and a 71.4 completion rate — but the game got out of hand quickly, and most of his production came after it was way too late.

Awuzie's replacement, Tre Flowers, left the game with a hamstring injury. ... Hubbard may have injured his hand and was getting X-rays after the game.

5 — Cleveland's winning streak over the Bengals, its longest over a single opponent since re-joining the NFL in 1999.

Cincinnati has a six-day week to address myriad issues before the Carolina Panthers (2-6) come to town Sunday ahead of an off week for the Bengals. Cincinnati plays at Pittsburgh coming out of the break Nov. 20, hosts the Browns on Dec. 11 and wraps up the regular season against Baltimore Jan. 8.