Burrow keeps going down, but Bengals keep moving on 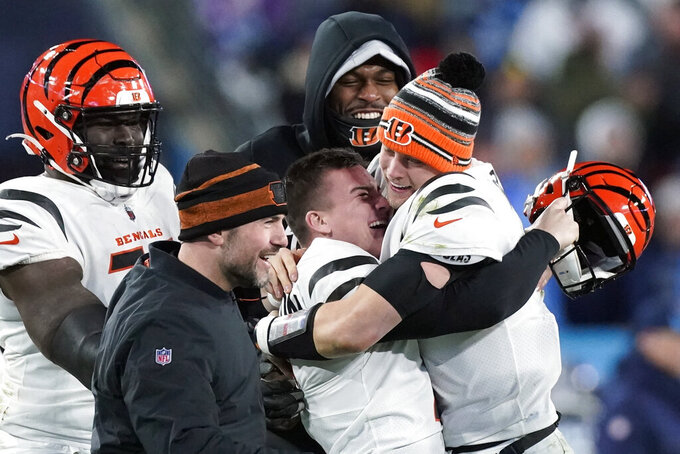 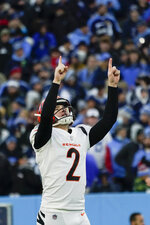 CINCINNATI (AP) — Joe Burrow took another beating against the top-seeded Tennessee Titans in the divisional round of the playoffs on Saturday.

However, he still managed to push and will the Cincinnati Bengals to within one game of the Super Bowl.

Now Burrow is faced with the task of outdueling Chiefs star Patrick Mahomes for the second time in a month as the two teams meet again, this time in Kansas City with the AFC championship on the line.

Burrow — along with a ball-hawking defense and rookie kicker Evan McPherson — found a way to pull out a 19-16 win over Tennessee on Saturday to advance to the AFC title game for the first time since the 1988 season.

The Bengals won despite Burrow being sacked nine times. Burrow is the third quarterback to be sacked nine times in a playoff game. The others are Warren Moon in Houston's 28-20 loss to Kansas City on Jan. 16, 1994, and the Chiefs' Len Dawson in a 31-7 win against the Bills in the AFL title game on Jan. 1, 1967. Burrow and Dawson are the only two quarterbacks to win the game.

Also, the 49ers had nine sacks against the Bears on Jan. 6, 1985, and the Browns had nine against the Jets on Jan. 3, 1987. However both of those games had multiple players take sacks for the losing team.

Burrow, the most-sacked quarterback in the NFL, is used to the bumps and bruises. But he got a clean pocket and made a huge play when it counted the most.

With the game tied and 20 seconds left, Burrow hooked up with rookie Ja'Marr Chase out at the right sideline for 19 yards. Two more short runs put McPherson in position for the 52-yard game-winner as time ran out.

The difference Saturday was the Bengals' three interceptions of Titans QB Ryan Tannehill that led to two of McPherson's four field goals.

“I know we haven’t been here before but it sure feels like we have,” Taylor said. “You see the attitude of the team and the confidence that they have, that we’re going to find a way to win. And just you can’t replace the confidence that these guys have earned in themselves and hopefully that carries us through for another couple games.”

The Bengals defense was outstanding. The unit bottled up Titans running back Derrick Henry, who was activated Friday after missing the nine previous games with a broken foot. The three interceptions were game-changing. Linebacker Logan Wilson picked off Tannehill with 20 seconds left, allowing Burrow to get Cincinnati into field-goal range.

The Bengals offensive line has struggled to protect Burrow all season, forcing him to adapt to the pressure and run from collapsing pockets. A season-ending ankle injury to right tackle Riley Reiff in December was a major loss.

Taylor tried to deflect some of the blame away from the line.

“There’s moments the offensive line could have been better, but I can promise you it wasn’t all on the offensive line,” he said. "It was all of us. You know, and it really starts with me. I got to do a better job taking the pressure off the quarterback and put us in a better position so those guys can’t tee off on us.”

McPherson's last field goal was a no-doubter, just like the previous three he hit in the game. He is 8 for 8 so far in the two postseason games.

Pro Bowl DE Trey Hendrickson, cleared from a concussion that knocked him out of the wild-card win, went to the sideline with an apparent injury late in the game, but Taylor said he's OK. ... DE Cam Sample has groin injury and is day to day.

109 — Receiving yards for Chase on five catches, his seventh 100-plus yard game this season, including two playoff games.

The Bengals will have to contend with Mahomes, who was terrific in the Chiefs' 42-36 win over Buffalo on Sunday. Cincinnati beat Kansas City 34-31 on Jan. 2 behind Burrow's four touchdown passes.