Carr back for 6th year as Raiders QB after offseason rumors 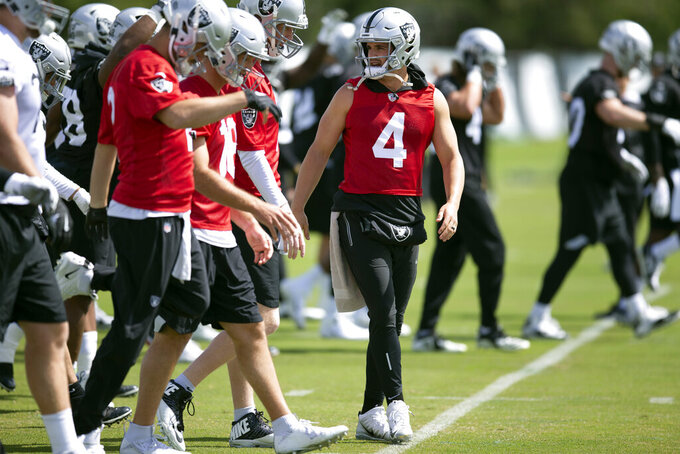 Oakland Raiders quarterback Derek Carr (4) works out with his teammates during an official team activity, Tuesday, May 21, 2019, at the NFL football team's headquarters in Alameda, Calif. (AP Photo/D. Ross Cameron) 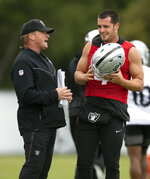 ALAMEDA, Calif. (AP) — Derek Carr acknowledged that all the speculation about whether the Oakland Raiders would draft a quarterback this offseason to replace him as starter got annoying, even if he was confident it wouldn't happen.

The rumors were only fueled when coach Jon Gruden and general manager Mike Mayock met with Kyler Murray and Dwayne Haskins before the draft. But they were both publicly and privately adamant that Carr was their man even if he was coming off a down season.

Carr took them and owner Mark Davis at their word and tried his best to tune out all the talk.

"When I watched the draft there was like negative 47% chance they would draft somebody in my mind," Carr said Tuesday. "It wasn't going to happen. They pretty much said that every time it came up, if it came up. We're obviously not just playing for this year. I'm honestly going to be here for a long time."

Carr has had an up-and-down tenure with Oakland since being drafted in the second round in 2014 and starting all 16 games as a rookie. He struggled on a poor team his first year but showed signs of being the answer to the Raiders' revolving door at quarterback.

He made big steps the next two seasons, throwing for a career-high 32 touchdowns in 2015 and then leading the Raiders to a 12-3 record and the first playoff berth since 2002 the following year before going down with a broken leg in the second-to-last game of the season.

Carr then took a big step back in 2017 after getting a five-year, $125 million deal in the offseason as he came back from the leg injury and was hampered at times by a back injury.

In his first year under Gruden, Carr had career-bests in completion percentage and yards, but threw a career-low 19 TD passes and was sacked a career-worst 51 times during a 4-12 season that led to all the talk about a possible change.

"I'm not going to critique Derek Carr in the media," Gruden said. "I think he's pretty well-respected as one of the best arm talents in football. He's a lot more athletic than people think. If we can get some continuity here in this building with the system and with the supporting cast and we can improve the defense, I think he can be one of the best in football."

The Raiders got Carr the help he needs by trading for prolific receiver Antonio Brown, signing deep threat Tyrell Williams, drafting running back Josh Jacobs in the first round and signing Trent Brown to the richest contract ever for a tackle.

Even more importantly, Carr gets to stay in the same offensive system in consecutive years for just the second time in his career. The last time that happened came during his most successful season in 2016 under coordinator Bill Musgrave.

Carr said the difference from a year ago when he had to practice calling plays in front of a mirror is night and day.

"It's nice to know I'm speaking the same language and I don't have to learn a whole new set of terminology," he said. "More importantly, I know Coach Gruden and the way he thinks now. I've played a season with him where I know what he expects on this down and distance."

Carr didn't have all his new toys at his disposal at the start of organized team activities. Brown was not at practice, although Gruden said he expected him back soon. Jacobs took part in stretching and walkthroughs but left before team drills as he deals with an undisclosed injury.

Carr did show some early chemistry with Williams, connecting on a deep pass for a touchdown during seven-on-seven drills.

"It's exciting," Williams said. "Hopefully we have a lot more of that."

That type of deep strike wasn't a big part of Oakland's offense last season under Gruden, who typically utilizes a shorter passing game. Oakland lacked reliable deep threats for much of last season and the offensive line struggled to give Carr enough time to throw deep.

Over the past three years, Carr has ranked tied for third on accuracy of deep passes, according to Pro Football Focus. But he hasn't taken many shots, ranking outside the top 20 every year in average depth of target and toward the bottom of the NFL when it comes to how often he throws deep.

"Contrary to popular belief, I like throwing it down the field. We're pretty good at it here," Carr said. "It's nice to have someone with that skill set. To be able to have multiple guys who can do it, there's no doubt about it, we've added a lot of speed to that room. It will be fun. It's fun for a quarterback."