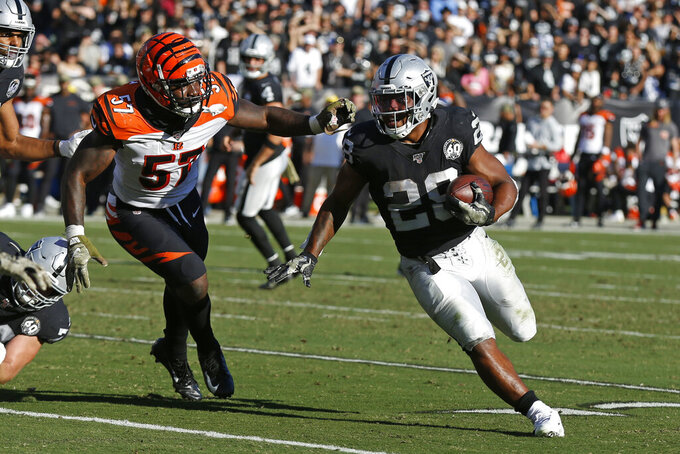 OAKLAND, Calif. (AP) — Maxx Crosby had the best day by a Raiders pass rusher in nearly four years, and Trayvon Mullen kept Oakland's defensive surge going with a game-clinching interception that ended any hopes that Cincinnati had of ending its winless start.

On a day when Jon Gruden's offense committed a pair of turnovers, including Josh Jacobs' first career fumble in the red zone, defensive coordinator Paul Guenther's unit made all the difference.

Derek Carr passed for 292 yards and a touchdown, Jacobs had his fourth 100-yard game in the last six weeks, and the Raiders beat the stumbling Bengals 17-10 on Sunday.

Oakland (6-4) won its third straight, all at home after a seven-week stretch on the road, to move into a first-place tie with Kansas City in the AFC West. The Chiefs play the Chargers on Monday night in Mexico City.

"We came off one of the most incredible road trips ever in the history of the NFL, and we came back and we did what we had to do if we want to try to get in this thing," Raiders coach Jon Gruden said. "We're competing hard and finding ways to win."

The difference between now and earlier in the season is that Oakland is getting siginficant contributions from its defense.

Crosby had a team rookie-record four sacks as the Raiders harassed Bengals rookie quarterback Ryan Finley and shut down Cincinnati’s offense after Joe Mixon had given it a lift in the first half.

It was the most sacks in a single game by an Oakland player since Khalil Mack had five against Denver in December 2015. Mack was traded to Chicago before last season in exchange for two first-round picks.

“People are starting to see the talent that he does have,” Carr said of Crosby. “I haven’t been around that many sacks by one guy since Khalil had five. I’m glad that he’s not chasing after me, that’s for sure.”

Crosby, a fourth-round draft pick, had a sack and forced fumble to end Cincinnati’s first drive, dropped Finley again in the third quarter and then sacked him twice in the fourth.

“I had a good game, but it was a collective unit coming together,” Crosby said. “We rushed well all day. I just tried to mix it up all game and keep him on his toes, and it worked out.”

The Bengals remain the NFL’s lone team without a victory, and their 0-10 record matches the 1993 team for the worst start in franchise history.

“That one really hurts because we went into that last drive expecting to win the game,” Cincinnati coach Zac Taylor said. “There wasn’t a point in the game where I thought it was going to get away from us. We have to find a way to win, and that’s what’s hurts the most is right now we just haven’t figured out a way to win.”

Even when things appeared to be going well for Taylor’s team, something went wrong.

With Cincinnati trailing 17-10 in the fourth quarter, Bengals wide receiver Auden Tate made a 20-yard catch on a third-and-19 play but suffered a neck injury when he was hit from behind by Curtis Riley. Tate stayed down for several minutes and was eventually placed on a cart and taken to the locker room.

“He could talk and (had) motion and all that,” Taylor said.

The Raiders, who allowed the Bengals to get their first win in ’93, avoided a repeat in part because of strong performances by Carr and Jacobs.

Carr completed his first 14 passes, including a 2-yard touchdown to Foster Moreau. Carr ran in from 3 yards out for Oakland’s other TD.

Jacobs ran for 112 yards on 23 carries, continuing his push for Offensive Rookie of the Year. The 24th overall pick in the draft, Jacobs has 616 yards in the last six games.

Mullen made a game-clinching interception in the fourth as Oakland’s defense came through late for the third straight game. Karl Joseph knocked down a fourth-down pass to secure a win against Detroit in Week 9, and then intercepted Philip Rivers' desperation pass to beat the Chargers in Week 10.

"You have to close out games on defense if you're going to win," Gruden said. "That's something that we're getting better and better at. I think we're actually looking forward to the challenges of going out there and finishing."

Jacobs’ first fumble of the season set up Cincinnati’s only touchdown.

Mixon took a handoff from Finley and started to his right into a wall of defenders, then cut back the opposite direction and scampered into the end zone to give the Bengals an early lead.

Incredibly, it was the Bengals’ first rushing touchdown this season by someone other than quarterback Andy Dalton (three). Dalton lost his starting job to Finley after Week 8.

Mixon finished with 86 yards on 15 carries.

ANOTHER RECORD FOR JACOBS

In addition to the scary injury to Tate, Cincinnati lost cornerback William Jackson and defensive end Carlos Dunlap to injuries in the fourth.

Raiders: At the New York Jets next Sunday, the first of two straight road games for Oakland.