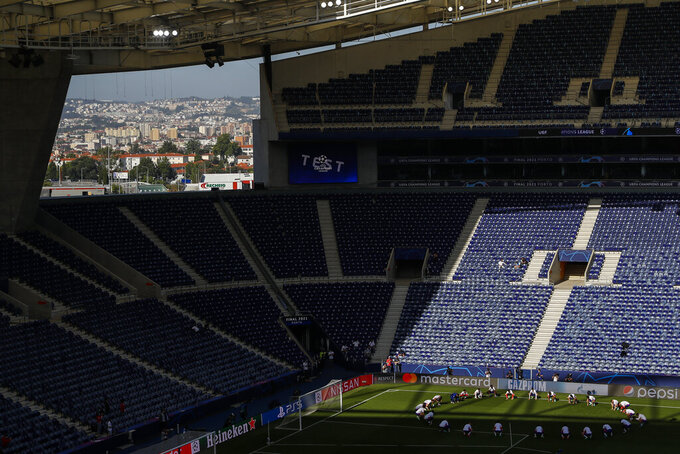 But the most rewarding assignment of Radovich's nearly 20 years at the network comes Saturday when the UEFA Champions League final between Chelsea and Manchester City airs on CBS.

While directing Malkovich presents its own challenges, Radovich has accomplished a herculean task over the past 10 months — building a soccer division for a network that has gone from barely any coverage to a vast portfolio.

“This is far and away the most rewarding thing I’ve ever been a part of in my career,” Radovich said this week from London.

When CBS won the rights to UEFA's Champions and Europa leagues in November 2019, they were not supposed to start televising the competitions until this August. But Turner opted out of its deal last July and CBS picked up the end of the 2020 tournament, which was delayed due to the coronavirus, as well as this season's full competitions.

Taking over from Turner had its challenges. Radovich had to assemble studio, production and announcing teams in six weeks. As CBS Sports chairman Sean McManus noted, that process usually takes a minimum of six months.

“The way we ramped up as quickly as we did is one of the great accomplishments that I can remember at CBS Sports,” McManus said. “It’s a little bit like someone saying to you, ‘You’ve never done a Super Bowl before, but in a month we’re starting the NFL playoffs, and you better have talent, production, technical, operations, communications and marketing.’"

Radovich, who has done everything from Super Bowls to the Olympics, has relished doing his favorite sport, which he played in high school and college. This week marks his fourth trip to Europe in the past year as he has been coordinating the coverage from London.

The original plan was for the production to originate from CBS' New York headquarters but the short turnaround time and the coronavirus lockdown mandates led to the network renting studio space in England.

Despite the hectic pace, CBS coverage has drawn rave reviews from even the most discerning soccer fans. Radovich said one possible reason for the success is that they haven't tried to base their coverage off other networks. Even though CBS had hardly done any soccer until the past 10 months, Radovich did have producers and directors who have long followed the sport.

“We treat this like we would an NFL playoff game. We want to do this at CBS Sports level,” he said. “We have people in place that weren't learning the sport. They are doing production at a super high level, and knew the sport coming in."

The broadcast Saturday will be the first on CBS after all the previous games aired on Paramount Plus and CBS Sports Network.

The most positive reviews have been for the studio coverage, hosted by Kate Abdo with Jamie Carragher, Roberto Martinez and Micah Richards. Abdo, who was a part of Fox and Turner's soccer coverage, said the success is the result of the right balance of personality and analysis.

“I don’t think I’ve ever seen on a soccer show in the United States before where you’ve allowed people to have their personalities and allowed that to kind of be front and foremost of the show but also to provide really solid analysis," she said. “I think that CBS has managed to find that golden balance that really appeals to a soccer audience which is very used to and has grown up on that kind of European-feeling format, which gives you a lot of depth and analysis, but has also managed to combine the sense that we can all be ourselves and have fun in that process."

Richards, who played 10 seasons for Manchester City, said the relaxed tone has gotten the attention of some of his counterparts. A big reason for that is social media as CBS' studio clips — whether it's Abdo discussing a female referee or Richards and Carragher dancing — generate a lot of clicks.

“I think everyone sees America as a bit more fun. In England, you have to be a little bit more serious and now people are seeing what we’re doing, and are like, why are we not doing that?” he said. “It works because we’ve got the credibility. We can get the analysis, along with the fun. Everyone in England, I’m telling you now, is jealous of what we’re producing, and that’s just being honest.”

With two clubs from England's Premier League competing Saturday, CBS is hoping to set the record for the most-watched English-language U.S. broadcast of a Champions League final. The 2018 final between Real Madrid and Liverpool on Fox drew 2.01 million, with the 2019 Liverpool-Tottenham match attracting 1.51 million on TNT.

Last year's final between Bayern Munich and PSG was on CBS Sports Network, but audience figures are not available since it is not publicly tracked by Nielsen. It did have 2.05 million viewers on Univision, making it the most-watched Champions League Spanish-language broadcast.

The game continues a busy soccer stretch for CBS. Coverage of the NWSL continues while Brazil's top league begins play this weekend. CBS adds Italy's Serie A in August.

“If you had asked me a year ago whether CBS Sports was going to be a major force in the world of international soccer, I probably would have said, ‘I’m not sure.’ It’s been a really, really satisfying journey for us so far,” McManus said.