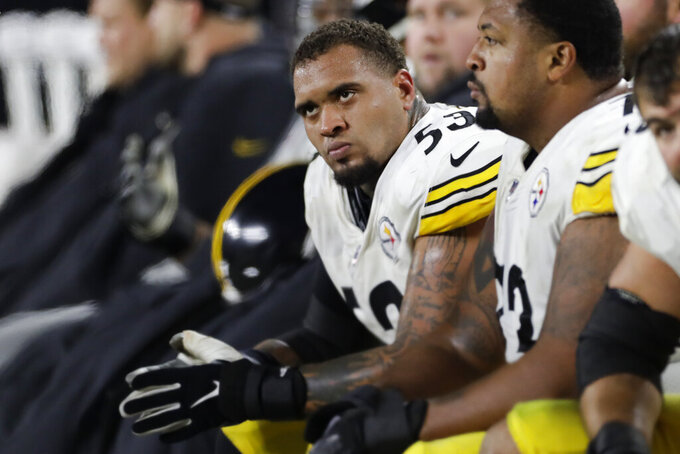 FILE - Pittsburgh Steelers center Maurkice Pouncey (53) sits on the bench during the second half of an NFL football game against the Cleveland Browns, Thursday, Nov. 14, 2019, in Cleveland. Pouncey still isn't thrilled with the collective bargaining agreement the NFL passed just as the pandemic lockdown began. Pouncey says the NFL has never been hurting for money and believes the Players Association should have held out for everything it wanted. (AP Photo/Ron Schwane, File)

PITTSBURGH (AP) — Maurkice Pouncey didn't love the collective bargaining agreement the NFL Players Association reached with team owners just as the COVID-19 pandemic brought the league and the world to a standstill. Not even a little.

Six months later, he's still not a fan, even if in hindsight the deal does give the NFL some level of financial security in a post-pandemic economy that Major League Baseball, for example, does not have.

“I still think we should have waited and got everything that we wanted,” Pouncey said Thursday. “To say that the NFL is hurting, and guys are signing multimillion-dollar deals? For me, I just don’t understand what the whole narrative is. If that was the case, then how are guys getting paid? We will see how things turn out.”

Pouncey and his twin brother Mike, a center for the Los Angeles Chargers, offered to help out younger players financially if the NFL went into a lockout while both sides haggled over billions. Instead, a new 10-year agreement narrowly passed in mid-March. The terms don't sit well with the eight-time Pro Bowler.

“There is always a cap number put in place to kind of put the players in check and make sure they are not overdoing things, in my opinion,” Pouncey said. “But to say the NFL won’t hit numbers as far as TVs, as far as advertisement to make up some of that money, as far as to say that they are going to lose would be hard for me to believe that.”

Pouncey's issue isn't with his salary. He's in the first year of a two-year, $22-million extension. He'd just have preferred the players receive a larger share of the pie and suggested the NFLPA got outmaneuvered at the negotiating table.

“I think there are a lot of great owners around the league, but they are billionaires for a reason,” the 31-year-old said. “They are very smart financially.”

Pouncey's frustration on the business side does not bleed into the game itself. Entering his 11th season, the ever-animated fulcrum of Pittsburgh's offensive line insists his passion hasn't waned. He spent the extended offseason rehabbing torn meniscus in his knee, a path he chose over surgery.

“I had a lot of time to work and get myself strong in that area,” Pouncey said. “I kind of got lucky with the aspect of it not being a lingering issue, so hopefully it stays that way throughout the season.”

Pouncey's presence is vital if the Steelers are to get back into the playoffs for the first time since 2017. The second longest-tenured member of the team behind quarterback Ben Roethlisberger finds himself with a new partner at left guard for the first time in nearly a decade following Ramon Foster's retirement. Matt Feiler will slide from right tackle to Foster's old spot, with Chukwuma Okorafor and Zach Banner competing for Feiler's old job at right tackle, rookie Kevin Dotson and veteran free agent signee Stefen Wisniewski providing depth.

The unit figures to be more effective than it was in 2019, but the change has nothing to do with personnel. Roethlisberger's return from a right elbow injury should make the line's job significantly easier while also providing Pouncey with a much-needed sense of normalcy.

“To watch his whole process of going through the surgery to being able to come back like this in Year 17 has been incredible to watch,” Pouncey said. “I know injuries and how hard they are, especially at that age, but he’s been out there rocking. He’s a true leader, a true soldier, and you can really appreciate that type of player.”

Having Roethlisberger's familiar No. 7 taking snaps from Pouncey might be one of the few things that feel routine. The pandemic and the rise in athletes speaking their minds in an effort to curb police brutality, racial and social injustice have made being an NFL player complicated, particularly for Pouncey. He's worked closely with Pittsburgh Police in recent years and donates tickets to the department to distribute to kids across the city.

“Obviously, there’s some bad apples in every organization that you look at," Pouncey said. “It’s hard to pinpoint to say every cop is bad. I know that’s truly not the case because I work with a lot of them. I’m friends with a lot of them, but I know there’s an issue that we have to clean up.”

The process, at least as far as Pouncey is concerned, will not involve any of the Steelers sitting out a regular-season game in protest.

“Our platforms are huge to speak out on, but I also think football is our main objective in our lives. But we can’t ever forget the simple fact that football is a game and there are people going on with real issues,” he said. “We are here to step up on the plate with that and understand the significance as far as pushing change, but sitting out games would be hard to say in my eyes.”

NOTES: Guard David DeCastro missed practice again Thursday while continuing to nurse a lower-body injury. ... S Cam Sutton and rookie WR Chase Claypool also did not practice. ... Pouncey was given the day off.