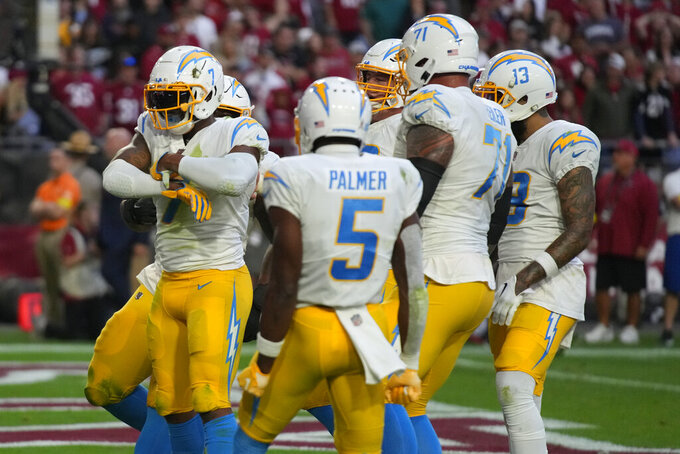 TURNOVER DIFFERENTIAL: Chargers plus-3; Raiders minus-1.

CHARGERS PLAYER TO WATCH: S Derwin James leads NFL defensive backs with 100 tackles. He also had his first interception of the season last week as well as a forced fumble. James did have a sack in the Week 1 matchup.

RAIDERS PLAYER TO WATCH: CB Nate Hobbs. He is expected to return after breaking his left hand Oct. 10 at Kansas City. His loss was felt by a secondary that has struggled badly. If he plays, Hobbs won't automatically make the secondary a strength, but his presence will be vital to defending Chargers quarterback Justin Herbert.

KEY MATCHUP: Chargers TE Gerald Everett vs. the Raiders back seven. Las Vegas has had its share of problems against opposing tight ends, and it's not as if the Raiders haven't searched for answers. They've mixed up coverages, often putting a safety on a tight end as opposed to an outside linebacker. Everett has 38 catches for 382 yards, and he caught three passes for 54 yards and a touchdown in the first meeting.

KEY INJURIES: Chargers LB Joey Bosa (groin) will be out. WR Mike Williams (ankle), C Corey Linsley (concussion) and OT Trey Pipkins (knee) are questionable. Hobbs likely would have returned last week for the Raiders if not for an illness, so the expectation is he will be back. Las Vegas coach Josh McDaniels said defensive tackle Andrew Billings (lower leg) is improving, but was limited in practice Wednesday.

SERIES NOTES: The previous time the teams met in Las Vegas, all either team needed to advance to last season's playoffs was a tie. The regular-season finale went into overtime, but the Raiders won the memorable Sunday night game 35-32 on Daniel Carlson's 47-yard field goal as time expired. Los Angeles has won seven of the past 11 meetings.

STATS AND STUFF: This will be the Chargers fourth road game in the past five weeks. ... Coach Brandon Staley is 2-1 vs. the Raiders and 5-5 in division games. ... Los Angeles has won 12 of the past 18 road games against the Raiders. ... The Chargers are looking to sweep the Raiders for the first time since 2018. ... Six of the past seven games in the series have been one-score games. ... QB Justin Herbert has thrown 13 touchdowns and only one interception in five games vs. Raiders. He had his 16th game with at least three touchdown passes last week, surpassing Patrick Mahomes for second most by a player in his first three seasons. ... RB Austin Ekeler is tied for the conference lead with 12 scrimmage touchdowns. ... WR Keenan Allen needs one more touchdown catch to reach 50 for his career. ... WR DeAndre Carter has a touchdown catch in three straight games. ... The Chargers defense has allowed at least 150 rushing yards in five straight games. ... The Chargers are allowing a league-low 3.9 yards per punt return. ... The Raiders' nine overtime victories over the past 10 seasons are the most in the NFL. They won their past two games in OT, more than any other team this season. ... After playing four of their past five games on the road, the Raiders end the season with four of their final six at home. ... Josh Jacobs' 80 first downs (67 rushing, 13 receiving) are the most of any player other than quarterbacks. ... Jacobs leads the league with 1,159 yards rushing. The most recent Raider to win the rushing title was Marcus Allen in 1985. ... Davante Adams has at least seven catches and 70 receiving yards in each of the past four games. He also has caught at least one touchdown pass in three of the past four games. ... Maxx Crosby has had at least a sack in each of the past three games. In two of those, he had at least 1 1/2 sacks.

FANTASY TIP: RB Austin Ekeler. Ekeler has 80 receptions for 497 yards and five touchdowns to go with 554 yards and seven TDs rushing. Given Las Vegas' defensive problems, he could have a big day. Rushing and receiving.