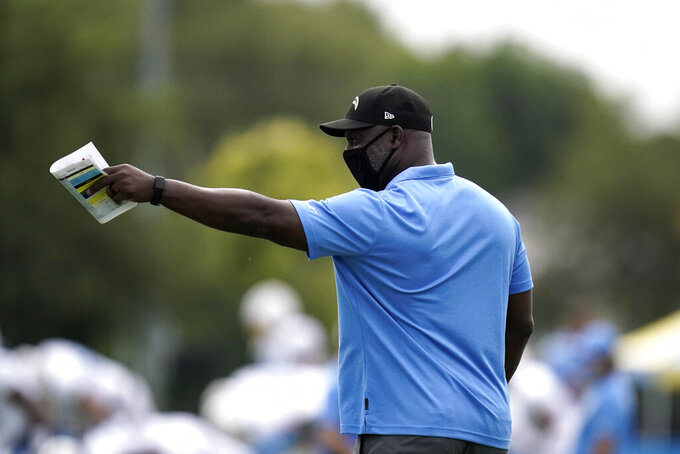 INGLEWOOD, Calif. (AP) — The Los Angeles Chargers saw their new home at SoFi Stadium for the first time as a team Thursday. But instead of conducting a scrimmage as planned, the team canceled practice due to the shooting of Jacob Blake.

Coach Anthony Lynn canceled practice after his players held a wide-ranging conversation in the locker room spurred by the shooting of Blake, a Black man, in Wisconsin last Sunday. The Chargers were one of nine teams to call off practice Thursday.

“We got a lot more done in the locker room than we would have on the field,” Lynn said, “As the head coach I have to have a feel for the team and my instincts told me not to take the field.”

Lynn said the players going through the routine of getting to the new stadium, walking the field and seeing the locker room still proved beneficial.

Lynn and his players have been having an open dialogue about race issues, police brutality and social justice since the death of George Floyd in Minneapolis three months ago. Those meetings happened on Zoom, however. This marked the first time the entire team was in one locker room and players could see each other up close.

Quarterback Tyrod Taylor agreed the conversations in the locker room were more emotional.

“To get that conversation out with everyone and see everyone’s takes was healthy. It affects some more than others,” Taylor said.

The mammoth 360-degree video board displayed the quote “I’m not sad. I don’t want your pity. I want change,” which was spoken by Letetra Widman, Blake’s sister, after the shooting. Ribbon boards around the stadium displayed the names of those who had been affected by police brutality.

NFL Network was scheduled to do a one-hour show from the stadium before the scrimmage, but it turned into a player’s town hall on off-field issues.

“This was a great time to do it. It is a testament to our organization and shows that this scrimmage is less important than dealing with the issues at hand. To have the organization behind us is good,” defensive end Isaac Rochell said.