Chargers sense reasons to worry after another slow start 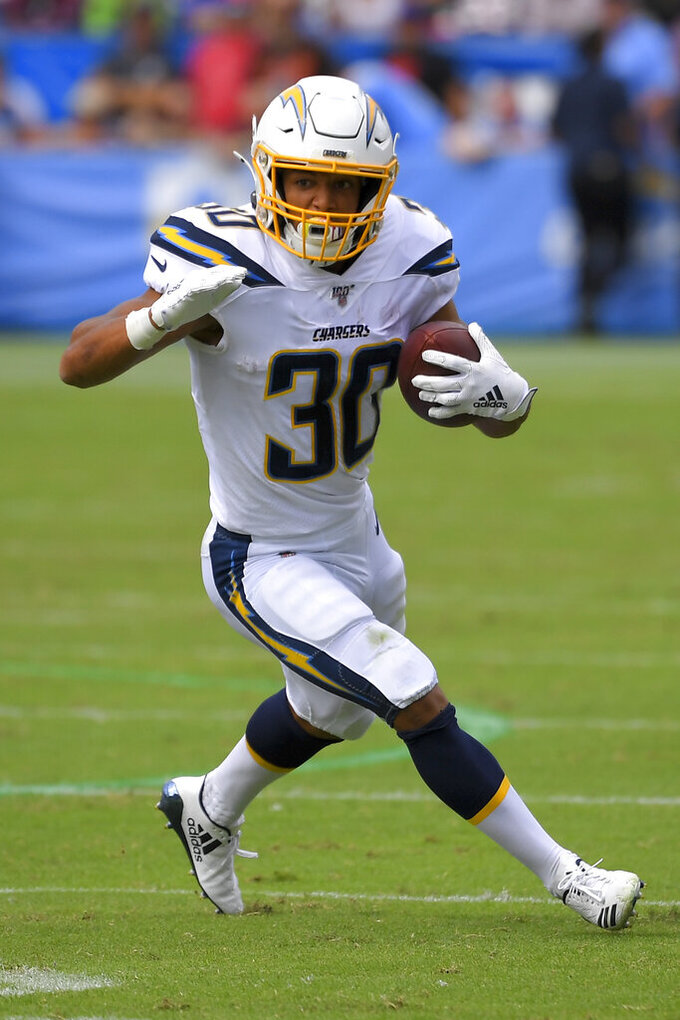 Los Angeles Chargers running back Austin Ekeler runs against the Houston Texans during the first half of an NFL football game Sunday, Sept. 22, 2019, in Carson, Calif. (AP Photo/Mark J. Terrill)

COSTA MESA, Calif. (AP) — For the third straight season since their move to Los Angeles, the Chargers have a losing record after their first three games.

While last season's team responded to a 1-2 start by going 11-2, these injury-plagued Bolts (1-2) are drawing no comfort from the fact they've been here before.

"It's easy to look in hindsight and say, 'Oh, we still had a good season,'" running back Austin Ekeler said. "In this one, you don't know. We could not win another game. That's how the season could go. We've got to make sure we're on all of our techniques, all of our fundamentals."

Those fundamentals aren't yet second nature to everybody suiting up for the Chargers, who are relying on inexperienced talent due to injuries, particularly on the offensive line and in the secondary. The Houston Texans exploited both areas during their second-half comeback from a double-digit deficit for a 27-20 victory last weekend .

Los Angeles is missing several starting-caliber defensive backs along with its starting left tackle, tight end and running back, among others. Coach Anthony Lynn and the Chargers won't use it as an excuse, but the improvisational nature of their lineups has been obvious so far.

Opponents are picking up on the Chargers' deficiencies as well. Lynn lamented the Texans' strategy to use max protection blocking schemes for Deshaun Watson combined with a quick passing game, which put pressure on LA's secondary and minimized the opportunities for Joey Bosa and Melvin Ingram to get sacks.

"We want to figure out different ways to affect the quarterback like tipping balls and getting their hands up," Lynn said. "When we got to (Watson), we didn't get him on the ground at all."

Los Angeles' inability to finish with a lead has popped up twice already this season, and Lynn is getting tired of it — even though he knows it's partly a reflection of the compromises being forced on the Chargers by their personnel shortages.

"We have to finish football games," Lynn said Monday. "We're getting up by two scores, and guys are coming back and that same urgency is not there right now."

Philip Rivers and Keenan Allen are one of the most dangerous combinations in the NFL, and they only appear to be getting better. Rivers found Allen with 13 passes for a career-high 183 yards and two touchdowns against Houston, with the star wideout repeatedly getting open for big gains. Allen entered Monday leading the NFL with 404 yards receiving, further underlining his status as one of the best receivers in the league.

Plenty of LA's offensive problems can be traced to the line, which yielded five sacks of Rivers — although only four were the line's fault, according to Lynn. The line is playing without veteran left tackle Russell Okung, and rookie replacement Trent Scott committed the final-minute holding penalty that essentially ruined the Chargers' last drive with the game on the line.

"The protection could have been better in some cases," Lynn said. "There's room for improvement."

Lynn isn't panicking about the line's play just yet. The Chargers will stick with the same starting five next week, although backup Forrest Lamp will play more.

Linebacker Thomas Davis and versatile defensive back Desmond King are standing out on the defense. Davis is third in the league with 33 tackles, while King had four tackles, a quarterback hit and a fumble recovery against Houston.

Teamer had a few ups and some definite downs in his first start as Derwin James' replacement at strong safety, but he'll probably get another chance this week. Lynn isn't interested in moving Rayshawn Jenkins, his starting free safety, to the strong side to clear a bigger role for Nasir Adderley, the promising second-round pick who missed much of training camp with injury.

"It looked like a rookie in his first start," Lynn said of Teamer. "But we have a lot of confidence in Roderic. We know he's going to get better. He'll get there."

Tight end Virgil Green left the game with a groin injury, and Lynn isn't sure about his availability this week. The Chargers didn't have any other new injury setbacks, according to Lynn. The coach also isn't sure whether any key players will return this week from their injuries — not even kicker Michael Badgley, who wasn't able to make his season debut due to a nagging groin injury.

10: Sacks of the 37-year-old Rivers already allowed by the Chargers in three games. That's the ninth-most in the NFL entering Monday night.

The Chargers have plenty of problems, but they couldn't ask for much better circumstances to work on them with a trip to rebuilding Miami this weekend. They won't overlook the struggling Dolphins (0-3), however.

"Shoot, I feel like we're going through a struggle, too," Ekeler said. "We've lost two games in a row, and in the first game, we barely snuck by in overtime. We've got to get on the ball."