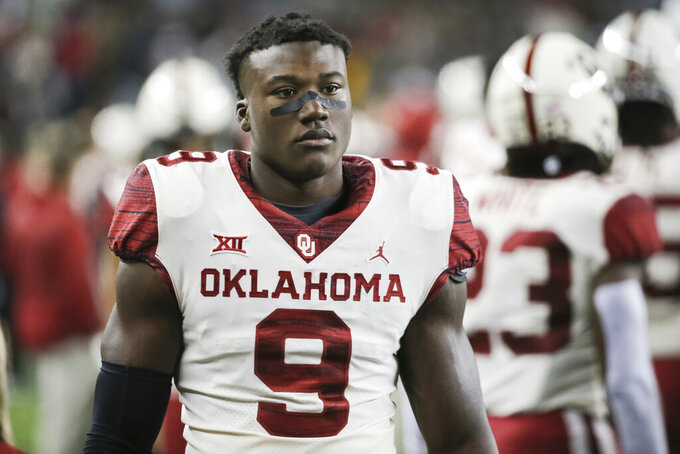 FILE - In this Nov. 16, 2019, file photo, Oklahoma linebacker Kenneth Murray walks in the bench area during an NCAA college football game against Baylor in Waco, Texas. Murray was chosen by the Los Angeles Chargers in the first round of the NFL draft. (AP Photo/Ray Carlin, File)

COSTA MESA, Calif. (AP) — The Los Angeles Chargers are hopeful Justin Herbert can develop into a franchise quarterback. They are planning on a patient approach.

Before Herbert can become the face of the franchise, general manager Tom Telesco just wants him to learn the playbook.

“There’s no pressure on Justin to walk in on Day One — we’re not asking him to come in here and carry the football whatsoever — just asking him to come in, start competing, start learning and we’ll take it from there," Telesco said of Herbert, who was the sixth overall pick in the NFL draft. “Really not asking him to be the face of the franchise. That’s not what we’d ask him to do and it’s something I wouldn’t even have to tell him.”

The Chargers hope Tyrod Taylor can begin the season as the starter and take the immediate pressure off Herbert. Coach Anthony Lynn has confidence in Taylor from the two seasons they spent together in Buffalo.

Herbert said he would be comfortable with whatever his role is this upcoming season.

“If I’m the guy, that’s great. I love playing football and I want to be the guy, but if I have to sit back and learn, I’m going to do everything I can to become the quarterback I need to be," he said.

Whoever starts in Week 1, it will mark the first time since the 2005 regular-season finale that Philip Rivers will not be the Chargers' quarterback. Rivers, who started 235 consecutive regular-season and playoff games over the past 14 seasons, signed with Indianapolis after LA went 5-11 last season.

Herbert started 42 games in his four seasons at Oregon, compiling a 29-13 record with 10,541 yards passing and 108 total touchdowns. He passed for 32 touchdowns and six interceptions in 14 games last season, leading the Ducks to the Pac-12 title and a Rose Bowl victory.

The last time the Chargers took a quarterback from Oregon, it worked out pretty well. Dan Fouts, a third-round pick in 1973, led the franchise to four playoff trips and three division titles in a 15-year Hall of Fame career.

Telesco usually stands pat with his picks, but he moved back into the first round to select Oklahoma linebacker Kenneth Murray. The Chargers didn't have a pick on Friday after sending their second- and third-round selections to New England for the 23rd pick on Thursday.

Murray gives the Chargers a solid run stopper with coverage skills, areas their linebackers have struggled with the past couple seasons.

The Chargers used two of their four Saturday picks on wide receivers. They took Virginia's Joe Reed in the fifth round and Ohio State's K.J. Hill in the seventh.

UCLA running back Joshua Kelley (fourth round) excels in yards after contact and gives the Chargers a between-the-tackles back they needed after Melvin Gordon signed with Denver.

Safety Alohi Gilman (sixth round) is the sixth Notre Dame player selected by Telesco in his eight drafts as Chargers GM.

“In the end on paper I liked the way we came out,” Telesco said. “We had some guys in mind with certain roles and we were able to get them. This team has changed a lot over last year.”

With this year's class having quality quarterbacks at the top, Telesco needed to get one. Taylor is in the final year of his contract and the franchise needs someone to bank on as it moves into a new stadium. The Chargers just hope it was the right choice with Herbert.

They also addressed a major need at linebacker as well as building depth at running back and wide receiver.

Los Angeles' most critical need remains at left tackle. Telesco has mentioned Sam Tevi, Trent Scott and Forrest Lamp as possibilities, but they could use a better option for such an important position.