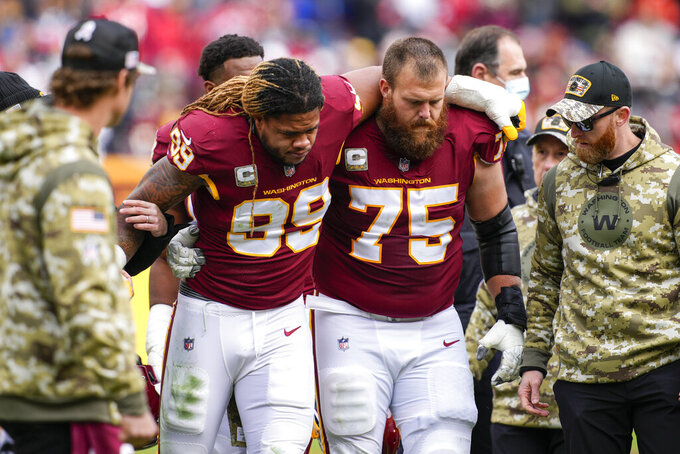 FILE - Washington Football Team defensive end Chase Young (99) is helped off the field by guard Brandon Scherff (75) after an injury during the first half of an NFL football game against the Tampa Bay Buccaneers, on Nov. 14, 2021, in Landover, Md. Young is starting training camp on the physically unable to perform list as he works back from surgery to repair a torn ACL in his right knee. (AP Photo/Nick Wass, File)

ASHBURN, Va. (AP) — Chase Young will not be ready to play Week 1 for the Washington Commanders, coach Ron Rivera confirmed Friday in ruling out the standout pass-rusher for at least the season opener.

Young could miss more than just Washington’s first game, Sept. 11 against Jacksonville, if he goes on injured reserve or remains on the physically unable to perform list. The 2020 Defensive Rookie of the Year is working back from surgery to repair a torn ACL in his right knee.

“It’s unfortunate,” Rivera said. “But it was a serious injury, obviously, with surgery, and he’s doing everything he’s supposed to.”

Rivera said Young, who injured the knee Nov. 14 against Tampa Bay, did not have a setback in his recovery and is on schedule.

“He’s on time as far as where the doctors think he should be, and as he gets better and better we can update you,” he said. “But right now, he’s right where he needs to be.”

Rivera initially said he expected Young to start the season on the PUP list, which would mean missing the first four games of the season. After opening against the Jaguars, the Commanders play Detroit, Philadelphia and Dallas -- games Young would also miss if he lands on IR.

Young had part of his left patellar tendon grafted into his right knee to help fix the tear. It’s unclear if that’s why he’s behind tight end Logan Thomas, who tore multiple ligaments in his left knee later last season, though Rivera called them different injuries.

Rivera has refused put a timeline on Young getting cleared to play.

Young, 23, said early in the offseason he anticipated being ready for Week 1. But he struck a more conservative tone during workouts last month.

“Obviously I want to be back there as fast as I can, but right now I’m just taking it one day at a time and I’m getting better fast,” Young said. “I can’t rush it.”

It seemed clear earlier in the week Young would not be coming back any time soon, when Rivera pronounced the Ohio State product the furthest away of Washington’s injured players. Starting center Chase Roullier, the closest after breaking his left fibula last year, was activated off the PUP list and returned to practice Friday.

Young is on the field working with other injured teammates and is still involved in other preparation aspects.

“We’re all watching film together, talking through things,” fellow defensive lineman Daron Payne said. “When he gets back out there, it’ll just be him getting a feel of rushing with me and rushing with other guys.”

Young won’t see game action until he’s fully healthy, something Rivera reiterated in line with the cautious approach the organization, doctors and trainers are taking with the face of the franchise.

Payne is not concerned about how Young is facing the prospect of such an extended absence.

“I feel like it’s just a mindset thing,” he said. “Chase, he’s got a real good head on his shoulders and I feel like he’s just ready to get back out there and show everybody what he’s got.”

NOTES: Guard Trai Turner missed a second consecutive practice with a quadriceps injury. Rivera said safety Jeremy Reaves and a few other players who didn't practice were dinged up but not expected to be out long. ... Linebacker Ryan Kerrigan is set to announce his retirement at a news conference Saturday. A first-round pick of Washington's in 2011, he spent 10 of his 11 NFL seasons with the team before playing last year for Philadelphia. Kerrigan, who turns 34 Aug. 16, had 466 tackles and 97 sacks in 176 regular-season and playoff games.