Chiefs could have Thuney, Toney back from injury vs Broncos 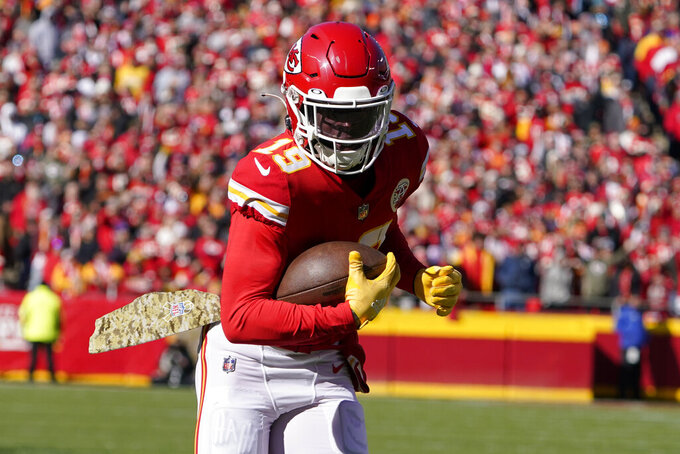 Kansas City Chiefs wide receiver Kadarius Toney heads for the end zone after catching a pass for a touchdown during the first half of an NFL football game against the Jacksonville Jaguars Sunday, Nov. 13, 2022, in Kansas City, Mo. (AP Photo/Ed Zurga)

KANSAS CITY, Mo. (AP) — The Kansas City Chiefs could have two important parts of their offense back with guard Joe Thuney and wide receiver Kadarius Toney returning to practice Wednesday ahead of their trip to Denver.

Chiefs coach Andy Reid said that everyone would practice in their first workout since blowing a late lead in Sunday's loss in Cincinnati. That includes Thuney, who did not play because of an ankle injury, and Toney, who was coming off his most productive game with Kansas City when a hamstring injury sidelined him most of the past three games.

“I'm going to let him get out there and work a little bit. We'll just see how he does,” Reid said of Toney, who arrived in a trade from the New York Giants, where similar injuries were a frequent issue for the 2021 first-round pick.

“We're not going to bring him back and have him hurt it again,” Reid said. “We'll see what we can do.”

As for Thuney, who is about as durable as they come, Reid said the big offensive lineman probably could have returned last week in Cincinnati, but chose to give him another week off in the hopes of avoiding any lingering issues.

“His thing was getting that final push,” Reid said. “He feels better this week than he did last week. He's made as much progress as he's had, I said, ‘Let’s give him a little more time.' That's where I was at the end of last week.”

Reid also said that wide receiver Mecole Hardman, who is eligible to come off injured reserve next week, is recovering nicely from his abdominal injury. Hardman has been running outside and put on some of the weight he lost while dealing with the problem, and there's a chance he could help Kansas City for the stretch run.

The Chiefs are tied with the Bills at 9-3 for the best record in the AFC, though Buffalo holds the head-to-head tiebreaker.

“The guys know where they're at. Nobody knows better than they do what's out front,” said Reid, whose team can clinch the AFC West with a win Sunday in Denver coupled with a loss by the Los Angeles Chargers.

“You don't have to stand up there and preach to them about that,” Reid continued. “They want to win games. That's the mentality of this team. They battled their hearts out Sunday and it didn't work out. We're back to it.”

In fact, Reid was peppered with questions Wednesday about bouncing back from the loss in Cincinnati — the third straight game this calendar year that the Bengals have beaten the Chiefs, including last season's AFC title game. And after the third or fourth question, Reid made it clear that his focus was off the Bengals and onto the Broncos.

The same goes for Patrick Mahomes, who will no doubt welcome Thuney and Toney back to the huddle.

“In this league,” he said, “you have to move on or you'll make one loss turn into two. You watch the tape on Monday and you get a sense of what you can do better, when you can take away that was positive, and you move onto next week.”

Mahomes has never lost to the Broncos in nine tries.

“We just really emphasize playing our division opponents,” he said, by way of an explanation. “That's what we work on all offseason. For us, the coaches do a great job of giving us great game plans and I just try to go out and execute them.”

NOTES: Mahomes was chosen as the Chiefs' nominee for the Walter Payton Man of the Year Award this week. “Just a tremendous honor,” he said. “To have my opportunity this year is something I'll cherish for the rest of my life.” ... Reid said there's a chance that two-time Pro Bowl RB Melvin Gordon, who was signed to the Kansas City practice squad late last month, could face his former team on Sunday. But carries would be scarce behind Isiah Pacheco and Jerick McKinnon. “We're fairly healthy there," Reid said, ”but I'm glad we have him. He's done a nice job for us."