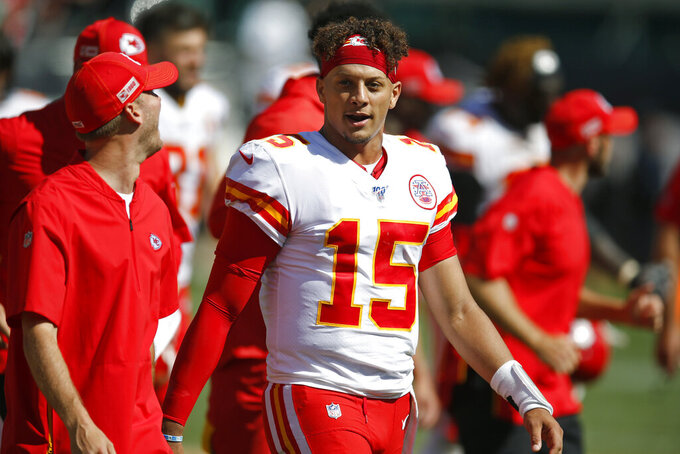 Kansas City Chiefs quarterback Patrick Mahomes stands on the sidelines during the second half of an NFL football game against the Oakland Raiders Sunday, Sept. 15, 2019, in Oakland, Calif. (AP Photo/D. Ross Cameron)

KANSAS CITY, Mo. (AP) — Patrick Mahomes began the season with what many viewed as the best collection of offensive talent in the NFL, whether that was at the skill positions or along the offensive line.

That certainly won't be the case on Sunday.

The Chiefs quarterback will be missing Eric Fisher for the foreseeable future after the Pro Bowl left tackle flew to Philadelphia on Monday to undergo surgery on a core muscle injury.

The Chiefs said Fisher hurt his groin in practice late last week, and he lasted just three snaps in Sunday's victory over Oakland before spending the rest of the game on the sideline.

Kansas City already is without All-Pro wide receiver Tyreek Hill for at least another month because of a broken collarbone, and top running backs LeSean McCoy (sprained ankle) and Damien Williams (knee bruise) join the cast of Chiefs on the sideline for Sunday's home opener against Baltimore.

Not that Mahomes — who sprained his ankle Week 1 in Jacksonville — appears to be concerned about the prospects of a bunch of backups around him in a matchup of 2-0 teams.

"Those guys have worked as hard as anyone to be ready for their opportunity, and you saw that last week," Mahomes said, alluding to the breakout performances by wide receivers Demarcus Robinson and Mecole Hardman. "I have the same trust with everybody on this team. I have trust that we're going to have those guys ready to play on Sunday."

It's not as if the backups are a bunch of bums, either.

Cam Erving, a first-round pick of the Browns in 2015, filled in admirable at left tackle when Fisher left the game. The Chiefs gave him a nice contract for a backup offensive lineman just for this purpose: He can play just about anywhere up front in the case of an injury.

"I thought Cam did a good job" against the Raiders, Chiefs coach Andy Reid said. "He had a solid game. He started off with a little shaky one there at the beginning but he finished it real well."

Robinson merely caught all six passes thrown his way for a career-best 172 yards and two scores, both coming in a four-touchdown second quarter in Oakland. Hardman, the Chiefs' initial pick in April's draft, caught four passes for 61 yards and his first career touchdown.

They were so effective along with tight end Travis Kelce that the Chiefs didn't even need much from Sammy Watkins, who had nine catches for 198 yards and three touchdowns in Jacksonville.

But if the Chiefs are confident in their backups along the offensive line and at wide receiver, they may be a little nervous in the backfield.

They signed McCoy a week before the season started in part to address their concerns, and now they could be down their top two running backs.

McCoy worked out a bit on Wednesday while Williams took practice off.

If neither can go Sunday, the Chiefs would run with journeyman backup Darrel Williams and sixth-round draft pick Darwin Thompson.

Williams beat out veteran Carlos Hyde for a roster spot in training camp but has appeared in just eight career games, while Thompson has a single carry for a single yard during the first two games of his professional career.

"I'm good with Darrel. Thompson, I feel like I know what he's doing. I feel good about it," said Reid, who also dismissed any concerns over the 5-foot-8 rookie's ability to be an every-down back.

"I was around Brian Westbrook for a number of years and they're the same size. He'd come up and fill it as good as anybody. This kid is wired the same way. He'll come up there and stick it," Reid said. "He's young so he hasn't seen everything there is to see, but he's getting there."

The way injuries are mounting in Kansas City, he had better arrive in a hurry.

NOTE: Reid declined to discuss rumors that the Chiefs could be a landing spot for disgruntled Jacksonville CB Jalen Ramsey, saying that GM Brett Veach handles all of those issues. "He allows me to concentrate on the football part of it," Reid said. "The speculation, I don't go there." Chiefs P Dustin Colquitt will appear in his 225th game Sunday, breaking the franchise record held by OL Will Shields. "He was an every-down-but-fourth guy," Colquitt quipped, "and I'm a fourth-down guy."