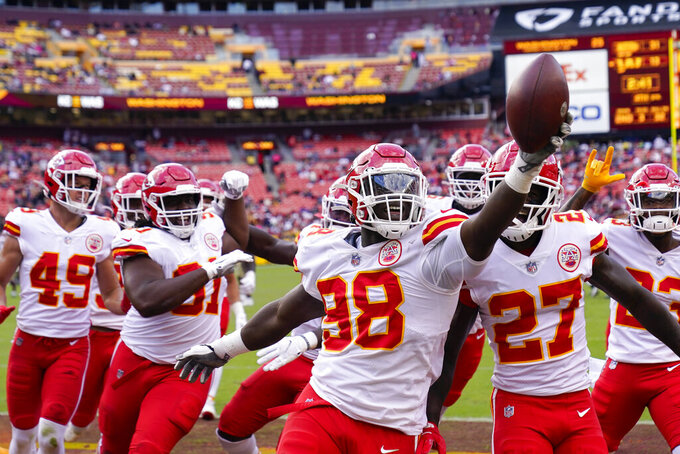 NASHVILLE, Tenn. (AP) — The Kansas City Chiefs are in catch-up mode while sitting at the bottom of the AFC West they've won the past five seasons. The Tennessee Titans have an opportunity to prove they're a team to be reckoned with in the AFC.

When the Chiefs visit Tennessee on Sunday, it's also the first game between these teams since Kansas City beat the Titans in January 2020 for the first of back-to-back AFC championships.

“When you have a chance to go to the big one and get a ring, not being able to do that hurts,” Titans quarterback Ryan Tannehill said. “But at the same time, that was two years ago, and we are not going to get hung up on what happened two years ago.”

The Titans (4-2) have won four of their last five and are coming off a big Monday night victory, 34-31 over Buffalo. Hosting the Chiefs and Patrick Mahomes would keep the defending AFC South champs in the early mix for a high playoff seed.

“We’re not really concerned about measuring ourselves or trying to beat two explosive teams back-to-back,” Titans safety Kevin Byard said. "It’s more about trying to get a ‘W' this week and finding any type of way to get a win.”

Kansas City (3-3) is 1-3 inside the AFC with losses already to Baltimore, the Chargers and Buffalo. This is a crucial point of the season with the Chiefs coming off a 31-13 victory at Washington and this their second straight road game.

“We’re still nowhere near where we want to be at,” Mahomes said. “We still have a long way to go with cutting the turnovers down, executing better as an offense and finding ways to score touchdowns and when they’re not there, take field goals. It’s something we have to continue to get better at and we have a long way to go.”

The NFL rushing leader has a career-best five straight 100-yard games and leads the league with 10 rushing touchdowns. Henry has run for three TDs in each of the past two games, the first in the NFL to do that and run for at least 100 yards since LaDainian Tomlinson in 2006.

The Chiefs are giving up 133.2 yards rushing this season, 27th in the NFL. But they may get defensive end Chris Jones back after a wrist injury kept him out of the past two games. Mahomes called Henry one of the best running backs of all time.

“The way he’s able to run the football, to get 20 to 30, whatever, 40 carries it is and then he comes back the next week and he seems like he’s just as fresh as the week before,” Mahomes said. “He’s a special talent who works his tail off to be who he is, and so we understand it’s going to be a great challenge for any defense to stop him.”

Nobody has turned the ball over more in the NFL than the Chiefs, led by Mahomes with eight interceptions.

Mahomes has been intercepted at least once in each of the past five games, including two in the last two. He has also lost a fumble.

Byard has three of the Titans' four interceptions this season.

Even with the turnovers, the Chiefs remain one of the NFL's top offenses. They're second in the league averaging 433.5 yards a game and fifth scoring 30.8 points. Mahomes is third with 1,887 yards passing, and he threw for a season-high 397 yards last week.

Tennessee has an added challenge with the quick turnaround after the Monday night game in a lengthy injury report. Left tackle Taylor Lewan, carted off the field against the Bills, is in the concussion protocol. Wide receiver A.J. Brown is recovering from a bout of food poisoning, and fellow receiver Julio Jones was on the sideline in the second half after aggravating a hamstring.

Three-time Pro Bowl punter Brett Kern should be back after missing three games with an injured groin muscle, then a stint on the reserve/COVID-19 list. The Titans already released Johnny Townsend, brother of Chiefs punter Tommy Townsend, earlier this week.

This is a rare week when the opponent's injury list is longer than Tennessee's. Kansas City has 16 players on its list compared to 10 for the Titans, but the Chiefs may be healing up a couple key defenders.

Not only is Chris Jones working his way back, cornerback Charvarius Ward is practicing after missing four games with a quad injury. Hill didn't practice with his own quad injury. Kelce also is dealing with a neck injury.