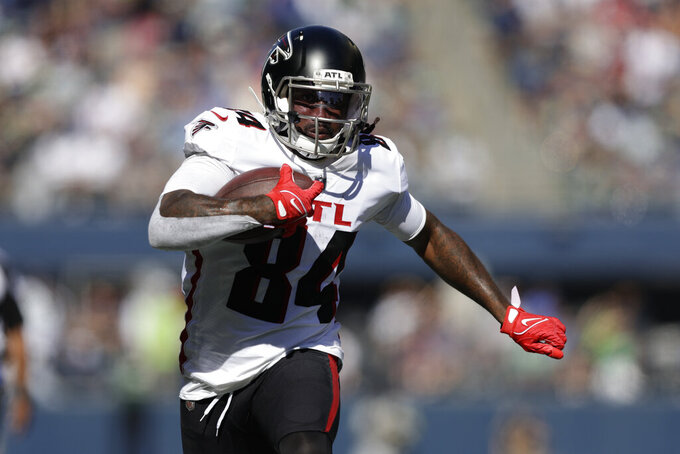 FILE - Atlanta Falcons running back Cordarrelle Patterson runs on his way to scoring a touchdown during the first half of an NFL football game against the Seattle Seahawks on Sept. 25, 2022, in Seattle. Falcons coach Arthur Smith knows what to expect from a Cleveland Browns offense which revolves around Nick Chubb's powerful runs. Smith wants his Falcons' attack led by running back Cordarrelle Patterson to mash back. (AP Photo/John Froschauer, FIle)

“They're coming to mash you,” Smith said.

Chubb, the NFL's leading rusher, and Patterson, who ranks third, will be in the spotlight in what Smith expects to be a “heavyweight fight” of running games on Sunday. Patterson is listed as questionable with a knee injury. He had limited participation in Friday's practice after resting his knee on Wednesday and Thursday.

This will be Chubb's first NFL game played in his home state. The Cedartown native previously played at Mercedes-Benz Stadium during his college career at Georgia.

“Things start to open up,” Chubb said. “I can’t really see them getting tired, but at the end of the game things do start opening up a lot easier.”

“I mean, yeah, teams know we’re going to run the ball and we still run the ball,” Brissett said.

Patterson, formerly a wide receiver and return specialist, has set career rushing highs in two of Atlanta's first three games, including his 141 yards in last week's 27-23 win at Seattle.

Browns All-Pro defensive end Myles Garrett will miss the game after suffering a sprained shoulder, strained biceps, cuts and bruises when he lost control and flipped his Porsche in a one-car crash after practice on Monday.

Cleveland listed him as questionable on Friday before downgrading Garrett before leaving for Atlanta. Garrett, who told reporters he was grateful that he and female passenger survived, did not make the trip.

MORE THAN A RECEIVER

Second-year Atlanta tight end Kyle Pitts made fantasy players happy when he had five catches for 87 yards last week. Pitts had only four catches for 38 yards in the first two games.

Smith said the tight end's value is based on more than his catches, pointing to his contributions in the running game.

Watson will claim the starting job when he returns in December. Brissett is making a case he should be starting for some team, if not Cleveland.

The 29-year-old Brissett has exceeded expectations, leading the Browns to a pair of wins while completing 74% (43 of 58) of his passes in the past two games. Brissett has developed chemistry with wide receiver Amari Cooper and he’s spreading the ball around to make all of Cleveland’s playmakers happy.

Brissett believes the Browns' offense can be even better.

“The reasons why we haven’t scored on every drive has been us,” he said. “It’s been things that we haven’t (done) and we’re still trying to correct."

Chubb has had strong support from backup Kareem Hunt as the Browns lead the NFL in rushing. The Falcons rank fifth with quarterback Marcus Mariota providing help for Patterson.

Mariota and Baltimore’s Lamar Jackson are the only quarterbacks with two rushing touchdowns this season.

In addition to Garrett, the Browns had four other defensive starters miss practice this week.

With Garrett and Clowney hurting, the Browns may need to rely on some rookies, including end Alex Wright.

Chubb doesn’t have much to say during his weekly media sessions.

“He talks to me,” Brissett told reporters. “I just don’t think he likes to talk to you guys.”

Chubb is loud when it matters — between the tackles and inside the yard makers.

Last week against Pittsburgh, Chubb ran for 113 yards, picking up 86 after initial contact while pin-balling off Steelers defenders, who made the mistake of trying to arm-tackle him.

Chubb has always had an effective stiff-arm, but he appears to be quicker and more elusive this season while relying on more jump cuts as he picks his way through holes.