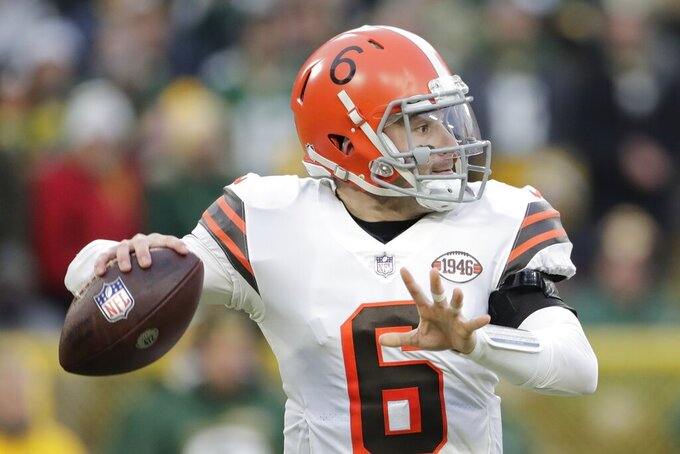 PITTSBURGH (AP) — The end might finally be at hand for Ben Roethlisberger. Just don't confuse the Pittsburgh Steelers quarterback's impending retirement with the idea he is coasting to the finish.

The player whose Hall of Fame-caliber career has been defined by his ability to extend plays out of a mix of strength and sheer will plans to go down fighting. Just like always.

When he runs out onto the Heinz Field turf for the 123rd and perhaps final time as the starter Monday night when the Steelers (7-7-1) host Cleveland (7-8), he won't be drinking in the moment. That will come later.

For now, the mission remains what it has always been during this 18-year career, trying to find a way to guide Pittsburgh to the playoffs.

“The fun thing is I know that I still have it in the tank to go out there this week and next week and give it everything I have," Roethlisberger said, “do everything I can to get us in into the postseason.”

A place he has taken his team regularly, often at the expense of the Browns. Cleveland passed on the Ohio native in the 2004 draft, and he has spent nearly two decades exacting his own unique brand of revenge. Roethlisberger is 24-2-1 against the Browns in the regular season, including a 15-10 win in Cleveland on Halloween.

The victory was part of a four-game winning streak that helped the Steelers recover from a 1-3 start. Yet that forward momentum has stalled. Pittsburgh is just 2-4-1 in its last seven games, including a blowout loss to Kansas City last week in which Roethlisberger watched the final minutes from the sideline after another blah performance by an offense that hasn't scored a first-half touchdown since the week before Thanksgiving.

Still, Roethlisberger remains optimistic there's still time for the Steelers to put together an abbreviated run in time to salvage a wildly erratic season.

“This is a team that’s hungry,” he said. “I mean, it’s the Browns, the division opponent, so they’re hungry to come in and get a win, too. I can’t sit here all week and just be nostalgic and think about everything that my career has been when I’ve got to focus on this game, because that’s (what's) most important.”

The Browns, like Pittsburgh, have endured a chaotic season. A chance to beat the Steelers at home for the second time in 11 months — the first coming in a cathartic 48-37 playoff victory last January — would add a small layer of irony in a rivalry that has been largely one-sided during Roethlisberger's long tenure.

“We know what is at stake,” Cleveland coach Kevin Stefanski said. “We know the team we are playing.”

One that will likely have a different quarterback under center for the first time in nearly 20 years. That's the future. Roethlisberger and his team insist they are both very much focused on the present.

“All I ever said I want to do is win,” he said. “And that’s what is most important to me, and so that is what’s going to be most important. I don’t care if it’s 3-0. I just want to win a football game, because it’s so important for our season right now.”

Steelers coach Mike Tomlin made the unusual decision to let offensive line coach Adrian Klemm leave for a similar position at Oregon with two games remaining to avoid any misperceptions about Klemm's commitment to finishing a job he began less than a year ago.

Chris Morgan will handle the offensive line coaching duties, a chance for him to state a case that he deserves the gig on a full-time basis next season. Having a young and largely uneven group find something resembling cohesion and momentum would be a start.

“I’m excited about the spin that his perspective will bring us,” Tomlin said of Morgan, who spent six years as the offensive line coach in Atlanta before joining the Steelers last February.

While Cleveland’s offense continues to search for a rhythm, the defense has pounded steadily along for weeks.

The Browns rank in the top 10 against the rush, pass and total yardage. After a sluggish start, a unit rebuilt in the offseason with free-agent signings has finally jelled. Cleveland has allowed 20 points or more just three times in the past nine games.

“We knew what type of defense we could be in camp and coming into the season and guys are making plays and they’re being themselves,” Pro Bowl cornerback Denzel Ward said.

After scrambling for two weeks and piecing together lineups due to a COVID-19 outbreak, the Browns are as healthy as they’ve been since early in the season.

Clowney’s return is the most significant. He had been playing his best football since joining the Browns before testing positive. Paired with star Myles Garrett, Clowney has bolstered Cleveland’s pass rush and has the Browns considering re-signing him.