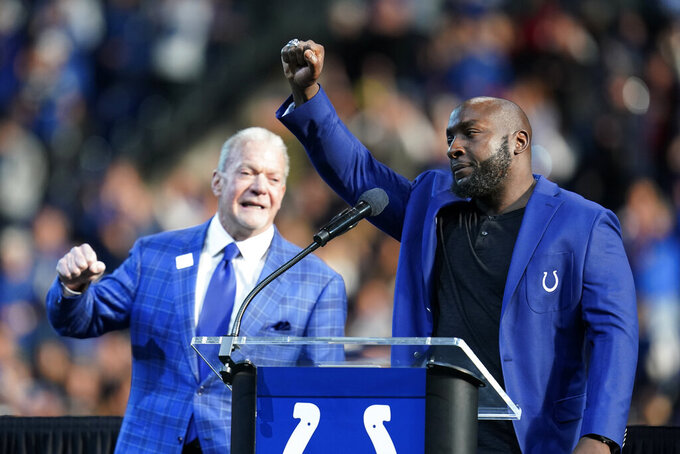 Former Indianapolis Colts' Robert Mathis, right, reacts after being inducted into the Ring of Honor by Colts owner Jim Irsay during a ceremony at halftime in an NFL football game against the Tampa Bay Buccaneers, Sunday, Nov. 28, 2021, in Indianapolis. (AP Photo/Michael Conroy)

The Irsay Family Research Institute will be located on the university’s main campus in Bloomington and will focus on mental health and the complications it can create with other illnesses.

“The stigma surrounding mental health is a matter of life and death, and we must do everything possible to lessen that stigma and remove this obstacle to people getting the help they need,” Irsay said in a statement. “Indiana University already has been one of the world’s leaders in studying mental health, and we’re so pleased this outstanding resource is in our home state so together we can advance this important conversation.”

The list of priorities includes providing direct support and development of research and researchers, and producing more graduates capable of working in the mental health industry.

In May, the Colts raised $4.5 million for grants and to fund institutions that provide mental health treatments.

Five-time All-Pro linebacker Patrick Willis, a semifinalist for the Pro Football Hall of Fame class of 2022, found a way to share some of the insight that helped him become a dominant player without spending long hours it takes to coach in the NFL.

Willis has a teaching course on the online training tool CoachTube.com.

“I have the utmost respect for the coaches and all the work they do. They put in a lot of crazy hours,” Willis said on the AP Pro Football Podcast. “I remember just telling myself I’ve learned a lot of knowledge coming through this game and I want to be able to share it, but I don’t want to have to be on the field 24/7 like I pretty much was when I was playing.”

Willis was drawn to the platform after a conversation with its founder, Wade Floyd.

“It was his purpose behind why he started it, and the biggest thing was he wanted to provide a platform for those who may not have the ability to pay for the extra coaching,” Willis said. “So this platform would allow those kids with those coaches or whomever is interested in the sports world to be able to click on and get some good coaching through an online source.”

Willis spent his eight-year career playing for the San Francisco 49ers. A five-time All-Pro, he made seven Pro Bowls in that span. Next week, Willis and former 49ers wide receiver John Taylor will be inducted into the team’s Hall Of Fame. Canton could be Willis’ next stop.

“When you started learning how significant the Hall of Fame is, I just told myself that one day, if I hopefully play the game right and play with everything I have, then one day I’ll be fortunate enough to perhaps get into the Hall of Fame,” Willis said.

ART IN THE FAMILY

Thurman Thomas performed his artistry on the field in what became a Pro Football Hall of Fame career for the former Buffalo Bills running back.

His wife is proving no slouch on the canvas.

Patti Thomas’ career is beginning to take off after a collection of her paintings was put on display last week at Art Miami, an international festival, which also featured the works of Picasso, Andy Warhol and Banksy. She was invited to make her debut at he show by Nicole McGraw Art Gallery of Palm Beach, Florida.

“Untrained artist is what they call it,” Thomas said of how she picked up painting. “I was encouraged by someone else to start. I would have never thought in a million years to pick up a paintbrush.”

Thomas initially went under the name of “Ghost Art,” to see if her work could stand on its own without any connection to her husband. She considers her art as neo-expressionism, in which she focuses on abstract commentary on real-life situations and characters, with a bent toward humor.

And, yes, some of her art is Bills related. One piece is titled, “Squatty,” in which she painted over a picture of her No. 34-wearing husband.

The paintings are far more complex than Thomas’ stick-figure drawing of a Bills fan crashing through a table, which became so popular among team fans they were printed on T-shirts and blankets.

“I didn’t really care if I failed. I just thought I’d give it a shot,” Ms. Thomas said of picking up painting. “You just never know what’s in store for you. Stay open.”

Thurman Thomas is a huge fan.

“We always knew that Patti was very creative, but we never imagined that she would be able to express that with a paint brush. It hasn’t just changed her life, it’s changed everyone that knows and loves her,” he wrote in a text. “We’ve always supported each other through everything, and she’s been my biggest fan for 34 years. Now I get to be her biggest fan,” Thomas wrote, before adding, “even though I was already her biggest fan.”

PUT ME IN, COACH

Detroit Lions rookie offensive tackle Penei Sewell, the No. 7 pick overall, insisted on staying in the lineup in last week's walk-off win over Minnesota instead of sitting out to rest his banged-up shoulder.

“He wasn’t 100% in that game," coach Dan Campbell said. “He came to us Saturday before the game and said, `I’m playing.' There was no talking him out of it."

When the Lions were driving late in the first half and set up a field goal, Sewell was initially slow to get up off the turf on Jared Goff's 24-yard pass before sprinting to the line because he knew the clock was ticking.

“It was unbelievable," Campbell recalled days later. “That's the type of guy he is."

The Texas-based Arena Football Association is expanding to six teams for 2022 and is discussing more expansion.

And get this: Following the April-July season will be a championship game, the Carrier Cup, slated to be contested aboard the aircraft carrier USS Lexington, which is stationed in Corpus Christi, Texas.

The league touts being built upon the pillars of equity, diversity and inclusion.

“Major professional sports have traditionally favored male ownership and operation,” explained Freeman. “Our league is changing the landscape of owning a team in professional sports, offering women and ethnic minorities the opportunity to own and operate teams alongside their male counterparts. This expansion of leadership talent will pave the way for a new generation of owners, players, coaches, front office staff and officials.”

The AFA, which also has an average game ticket price starting at $20, is focused on placing franchises in underserved markets, targeting cities whose populations range from 200,000 to 2 million.

“Our goal is to bring teams to areas that haven’t been home to football on a professional scale,” added Freeman. “And we want to go places that other professional leagues haven’t dared, hence the decision to host this year’s title game aboard the USS Lexington.”

Pro Football Hall of Famer Willie Roaf will serve in the role of league ambassador. Rachel McKenzie, president of the NFL Wives Association and wife of retired Packers and Saints cornerback and Super Bowl champion Mike McKenzie has an agreement in principle to start an AFA franchise in Baton Rouge, Louisiana for the 2023 season. She’s also in conversation with the league’s executives about potentially becoming a chief adviser for the AFA.

Other potential ownership groups have reached out for such markets as Columbia, South Carolina, and Southern Georgia.

The Rams fed more than 3,600 Los Angeles County residents on Tuesday as part of their Community Blitz Day of Service.

The team and its corporate partners distributed frozen holiday meals at SoFi Stadium in a drive-thru giveaway to families in need during their ongoing initiative.

Last year, the Rams and their partners fed more than 8,000 residents of a county in which an estimated one in five people lives in food insecurity – not knowing where the next meal is coming from.

Five former Ohio State players were among nominees for the Walter Payton Man of the Year award. That is the most among colleges, with Alabama next at four.

Los Angeles Chargers center Corey Linsley said it was always a priority at Ohio State to give back, starting with former coach Jim Tressel making it a point to have players going to visit cancer patients at the university hospital.

“It’s kind of wild. I feel like it speaks a lot for where we came from,” Linsley said. “Again, when we were at OSU it was something that big emphasis was put on that, and a lot of us carried it into the NFL. Wanting to give back whether it’s your hometown or community whatever those guys putting their emphasis on, I think it speaks highly of the character of guys that we have.”

Hall of Fame wide receiver Cris Carter in 1999 is the only former Buckeye to win the prestigious award.