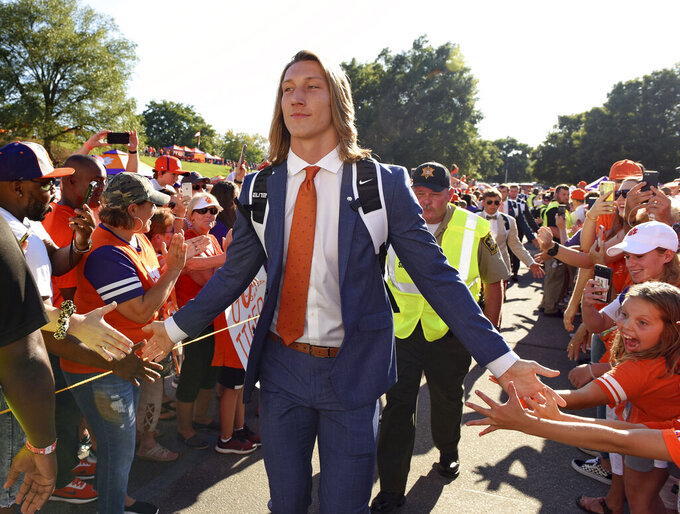 FILE - In this Aug. 29, 2019, file photo, Clemson's Trevor Lawrence greets fans as he arrives for the team's NCAA college football game against Georgia Tech in Clemson, S.C. Trevor Lawrence and Zach Wilson are expected to be the top two picks selected in the NFL Draft on Thursday, April 29, 20212, in Cleveland. (AP Photo/Richard Shiro, File)

One quarterback. Then another. And yet another.

For the first time since 1999, the top three names in the NFL draft were all QBs.

Before the opening round reached its midway point, two more signal-callers had come off the board.

By all indications, this could be one of the greatest quarterback classes in the annals of the draft.

“The best is yet to come,” Trevor Lawrence confidently predicted after his name was called first by the Jacksonville Jaguars on Thursday night.

But if history has taught us anything, it’s that at least two or three of these guys will turn out to be major disappointments.

Selecting a franchise quarterback, you see, has always been a risky endeavor.

For every Patrick Mahomes, a team is just as likely to land a Mitch Trubisky. For every Baker Mayfield, there is sure to be a Josh Rosen in the batch.

Lawrence and his fellow first-rounders — Zach Wilson, Trey Lance, Justin Fields and Mac Jones — certainly have a lot going for them as they prepare to embark on their NFL careers.

But there are also enough red flags to comfortably project some big-time busts will emerge from this group.

Lawrence and Wilson will be facing intense pressure to turn around dismal franchises. Lance has an extremely thin college resume at a second-division school. Fields is heading to a team that has long been a black hole for promising young quarterbacks. Jones spent most of his college career backing up others.

For perspective, let’s go back to 1999, which closely mirrored this draft. The top three picks were used on quarterbacks. A total of five QBs were selected in the first round.

As we now know, Couch, Smith and McNown were huge busts.

Couch lasted only five seasons with the Cleveland Browns, going 22-37 as a starter. Smith made just 17 starts, posting a 3-14 record over four seasons in Cincinnati before his career fizzled out. McNown lasted just two seasons, going 3-12 over 15 starts with the Chicago Bears.

Culpepper had success early on, earning three Pro Bowl appearances with the Minnesota Vikings, but a serious knee injury essentially snuffed out his career at age 28. McNabb is the only member of the Class of ’99 to fulfill expectations, lasting 13 seasons, going to six Pro Bowls and leading the Philadelphia Eagles to the Super Bowl.

Over the past decade, first-round quarterbacks have produced similarly checkered results.

It’s too soon to pass judgement on the four from a year ago, led by top overall pick Joe Burrow of the Bengals. But of the 30 first-rounders selected from 2010-19, we can already declare that half of them were full-fledged busts.

Start with Dwayne Haskins, taken at No. 15 by the Washington Football Team in 2019. He didn’t even make it through two seasons in the nation’s capital, let go after throwing more interceptions than touchdowns and continually making bad decisions away from the field.

Haskins has plenty of company in the Flop Division.

Rosen has been with three teams in three seasons. Trubisky appears destined for a career as a backup after running out of chances with the Bears, which puts him on the path taken by Marcus Mariota. Blake Bortles, Blaine Gabbert and Paxton Lynch are available for hire. Brandon Weeden, Christian Ponder, Jake Locker and EJ Manuel are long gone.

And let's not forget Johnny Manziel, last seen playing in some indoor-slash-video game league after washing out professionally in both the United States and Canada.

So, who has the best chance of success from the Class of 2021?

Lawrence, for sure, even though he's now the face of the Jacksonville Jaguars — a team that went 1-15 a season ago and has been horribly managed for far longer than that. The Jags are poised for a major turnaround, hiring Urban Meyer as coach and possessing plenty of cap room and draft picks to begin assembling a respectable team around their rookie quarterback. It may take a few seasons for the results to show, but Lawrence seems destined for a long, successful career in the league.

Then there's Jones, the No. 15 pick of the Patriots. He was largely overlooked out of high school and had only full season as the starter at Alabama, but he couldn't have landed in a better spot than New England, where he'll be groomed as the long-term replacement for Tom Brady.

Jones' skillset would not have worked for a lot of teams, but it should be a smooth transition going from the greatest coach in college football history (Nick Saban) to the greatest coach in NFL history (Bill Belichick). After hearing his name called by the Patriots, Jones headed to the draft stage with the urgency of someone who wasn't the least bit intimidated about following in Brady's footsteps.

As for the other first-round QBs, the outlook is a bit murkier.

Wilson's arm strength prompted the New York Jets to pick him at No. 2 after cutting ties with Sam Darnold, who was selected at No. 3 just three seasons ago. But Wilson's resume was basically built on one stellar season at BYU, where he didn't face any Power Five competition or anything close to the sort of media scrutiny he'll now be getting in the Big Apple.

Lance is the biggest mystery of the QB class. He wasn't recruited by any Power Five schools, started only 17 games at FCS school North Dakota State and opted out of most of last season after pandemic struck. But the 49ers, who had traded up to No. 3 and were supposedly interested in Jones, shook up the draft by taking Lance. Check back in a few years on this one, because he'll certainly begin his career as a backup behind Jimmy Garoppolo.

Finally, there's Fields. After failing to claim the starting job at Georgia, he transferred to Ohio State and turned in two stellar seasons for the Buckeyes, leading them to a pair of appearances in the College Football Playoff. Fields was the No. 11 choice by the Chicago Bears after they gave up on Trubisky, the No. 2 choice in 2017.

Landing Fields looked like a bit of a steal, but lets not forget this is the Bears. They haven't had any success picking quarterbacks since Jim McMahon in 1982. Their first-round QBs since then? Jim Harbaugh, McNown, Rex Grossman and Trubisky. Good luck n the Windy City, Justin.

Of course, it's all just speculation at this point.

The only thing we can say with any certainty is that at least some of these guys are headed for infamy, not fame.