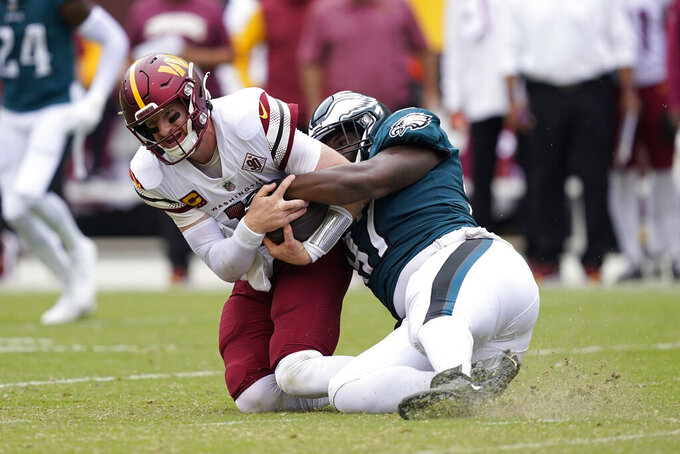 “I hope you have a great year — just not today,” the defensive end told the new Washington Commanders quarterback.

Graham was right. Wentz had a terrible day in his first game against the team that drafted him, fumbling twice, losing one of them and getting sacked nine times in a 24-8 Eagles drubbing of the Commanders on Sunday. Wentz had just 24 yards passing at halftime, when Philadelphia led 24-0, and made up most of the rest of his stat line in garbage time.

“I think he could have played better,” coach Ron Rivera said. “That’s the truth.”

The truth is Rivera bet his team's success this season on Wentz when he acquired the veteran quarterback from the Indianapolis Colts, who also thought they solved their problems at the position by trading for Wentz a year earlier.

After Wentz threw for seven touchdowns in the first two weeks of the season — one comeback victory against Jacksonville and another effort that fell short in a loss at Detroit thanks to a slow start — his performance against the Eagles was more reminiscent of why they moved on from him following the 2020 season.

Wentz said he was “not good enough" and added, “I've got to be better.” He downplayed the emotional impact of facing his first NFL team, Jalen Hurts who replaced him and the heavy concentration of Philadelphia fans in the stands.

“They got our number today,” Wentz said. “Obviously I’ve been on that side of the ball. I know Eagles fans travel well and they showed up and they had a lot to cheer for today because we didn’t play our best ball and I didn’t play my best ball.”

Wentz finished 25 of 43 for 211 yards, but those numbers were little consolation after the game got out of reach. Six of Philadelphia's nine sacks came in the first half against a QB defenders knew well.

“We just made it about us,” said Graham, who led the Eagles with 2½ sacks. “We knew what we knew about Carson, but we knew it was a new day. He’s with a new team. And he knows his issues, too. But we just wanted to go out there and play as a team.”

Many of the sacks could be blamed on coverage breakdowns, and Eagles coach Nick Sirianni thought the defense did a good job forcing “known pass” situations and taking advantage of them. But Wentz also held onto the ball too long on a couple of them, and the fumble he lost set up Philadelphia's first touchdown.

“I’ve got to get rid of the ball in a lot of those situations: find a way to find a check down and just move on,” Wentz said. “Hats off to their D-line, their front. It’s a good front, but I’ve got to be better and help our guys out."

Rivera continued to defend Wentz off the field, blasting the timing of an ESPN report published earlier Sunday saying Washington had the framework of a deal in place with San Francisco for 49ers starting quarterback Jimmy Garoppolo before Garoppolo decided to have shoulder surgery.

“We are getting ready to play Philadelphia,” Rivera said. “That’s what I’m disappointed in. I really am. Whatever it is for whatever reason, the report’s got to get out. Did it really have to get out, or could it have waited until after we finished our game and then get it out? So I’m just disappointed it got out.”