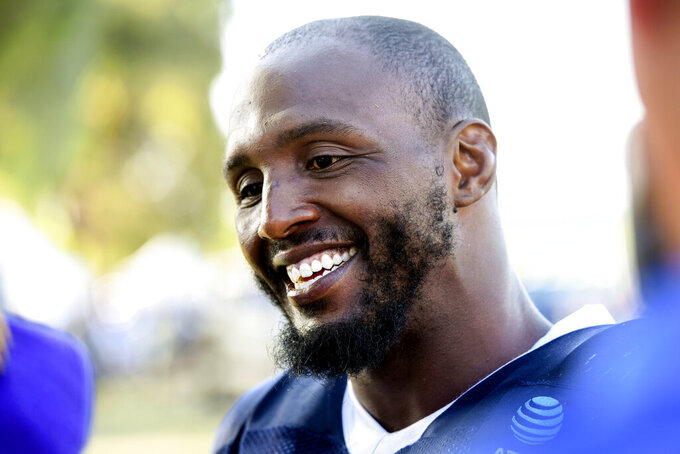 FILE - In this July 29, 2019, file photo, Dallas Cowboys defensive end Robert Quinn talks with reporters at the NFL football team's training camp in Oxnard, Calif. Robert Quinn is set for his Dallas debut against Miami after the Dolphins traded the defensive end to the Cowboys in the offseason. Quinn served a two-game suspension over performance enhancers. (AP Photo/Michael Owen Baker, File)

FRISCO, Texas (AP) — Dallas defensive end Robert Quinn wasn't sure how to respond when asked if he had talked to any of his former teammates in Miami as he prepares to make his debut for the Cowboys against the dismantled Dolphins.

Quinn was one of the first moves in the overhaul of the Miami roster, sent to the Cowboys for a sixth-round pick in March to give the Dolphins some salary cap relief in a youth movement under first-year coach Brian Flores.

Now the Cowboys have turned it into something quite the opposite. On Wednesday, Dallas waived disappointing 2017 first-round pick Taco Charlton, who turns 25 in November, to make room for Quinn.

The 29-year-old Quinn, returning from a two-game suspension for violating the NFL's ban on performance-enhancers, appears set to play Sunday after missing most of training camp with a broken left hand.

"Just get a 'dub' for the team," Quinn said when asked if facing the Dolphins (0-2) added anything to his debut for Dallas (2-0). The two-time Pro Bowler spent one year in Miami following seven seasons with the Rams, who drafted him 14th overall in 2011.

"I realize, don't try to make things more than what it is. Me just coming back, the team's been doing well. I'm just coming back, trying to contribute as best as I could and not try to let this team down in any way, shape or form. I don't want to overwork myself, overhype myself."

This week, Miami sent disgruntled defensive back Minkah Fitzpatrick to Pittsburgh for another first-round pick, giving the Dolphins three in next year's draft. Meantime, they've been outscored 102-10 — and no team since 1961 has had a worse point differential after two games.

Quinn likened the purge of the roster under Flores to what coach Jon Gruden did last year in his first season back with Oakland, before the Raiders finished 4-12.

"I think coach Flores is doing his thing, same thing Gruden's doing," Quinn said. "It's probably not great. I'm not in the building so who cares. He can do what he wants. You've seen one coach do it, don't knock another coach for doing the same thing."

While with the Rams and Dolphins, Quinn protested police brutality, social injustice and racial inequality by raising his fist during the national anthem. Colin Kaepernick sparked the debate in 2016 by kneeling during "The Star-Spangled Banner."

Dallas owner Jerry Jones has been outspoken against any protests during the national anthem, and was the first owner to suggest he would bench players over any displays during the anthem.

Quinn didn't raise his fist during the anthem before the Cowboys' two home preseason games. He wasn't on the sideline for the first two games of the regular season.

Quinn says reporters have distorted what the protests were about and wasn't interested in saying whether he would raise his fist before the game against his former team.

"I'd rather me keeping myself, I handle my business the way I handle it," Quinn said. "You want to know what I'm about, you come speak to me in my personal space, not at work. And you see how I really roll."

Quinn said his hand was "all right" and he hoped to be able to play without extra protection. When Quinn broke the hand Aug. 6, the hope was to have him ready for the opener. The suspension was announced two days later, which set up Quinn's debut against the Dolphins.

"That would sit heavy on my heart basically saying that I'm not good enough to be on y'all's team so we let y'all go?" said DeMarcus Lawrence, who should start opposite Quinn at defensive end. "He's got some work to do."