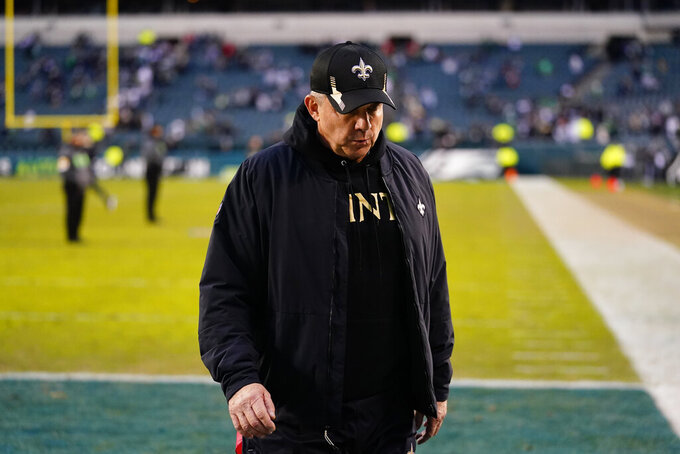 BETTING LINE: Cowboys by 4 1/2, according to FanDuel SportsBook.

TURNOVER DIFFERENTIAL: Cowboys plus-4; Saints plus-4

COWBOYS PLAYER TO WATCH: DE DeMarcus Lawrence appears set to play for the first time since breaking a foot in practice the week after the opener. The club’s highest-paid pass rusher by far will be looking for his first sack in what is almost assuredly a third consecutive season of single-digit sacks since two straight with at least 10 earned Lawrence a $105 million contract.

SAINTS PLAYER TO WATCH: Taysom Hill could start or at least see more snaps at quarterback after working his way back from a plantar fascia injury. The Saints' struggling offense is looking for a spark and the dual-threat Hill will hope to provide it.

KEY MATCHUP: The Dallas running game led by Ezekiel Elliott against a Saints defensive front that ranks third in the NFL against the run, allowing 91.9 yards on the ground per game.

KEY INJURIES: Cowboys WR CeeDee Lamb should be back after missing a game with a concussion. ... Coach Mike McCarthy, who will miss the game due to COVID-19 protocols, hinted the Cowboys might rest Elliott, who has been battling a sore right knee for weeks. But owner/general manager Jerry Jones indicated Elliott would play. ... WR Cedrick Wilson (ankle) didn’t practice all week. Wilson had his first 100-yard game of the season with 104 against the Raiders. ... DE Randy Gregory (calf strain) is eligible to come off injured reserve but could be at least a couple of weeks away from returning. ... Saints running back and top overall offensive player Alvin Kamara practiced on a limited basis all week after missing the previous three games with a knee injury. ... Fellow RB Mark Ingram is ready to return from his knee injury. ... DEs Marcus Davenport (shoulder) and Tanoh Kpassagnon (ankle) have not practiced this week and did not play last week. ... RT Ryan Ramczyk practiced twice this week before missing the third practice as he tries to come back from a knee injury that sidelined him for two games.

SERIES NOTES: The Saints have won 10 of the past 13 meetings since 1998. The past two have been decided by three or fewer points, with the Cowboys winning 13-10 in 2018 and the Saints winning 12-10 in 2019. The Saints have not lost to the Cowboys in the Superdome since 2009, when Dallas ended New Orleans' 13-game winning streak to open that season en route to New Orleans' lone Super Bowl triumph.

STATS AND STUFF: A COVID-19 outbreak has sidelined two players and six coaches for the Cowboys. Defensive coordinator Dan Quinn is handling head-coaching responsibilities. RT Terence Steele and rookie CB Nahshon Wright are the latest Dallas players to miss games because of the coronavirus. WR Amari Cooper was activated Wednesday from the COVID-19 list after missing two games and could play. The unvaccinated Cooper still wasn’t feeling well after being cleared to return to the facility, McCarthy said. The club also was concerned about conditioning. OL coach Joe Philbin and assistant strength and conditioning coach Kendall Smith are missing their second consecutive game. ... The Cowboys have lost three of four since a six-game winning streak pushed them to 6-1. What was a four-game edge in the loss column in the NFC East is now two. ... Since 2016, QB Dak Prescott has 12 games with at least 375 yards passing, tied with Kansas City’s Patrick Mahomes for the most over that span. ... LB Micah Parsons leads all rookies in sacks (nine) and tackles for loss (15) and can become the first rookie since Joey Bosa of the LA Chargers in 2016 to get a sack in five consecutive games. ... The Saints are trying to avoid their first five-game skid since 2005 under previous coach Jim Haslett. ... Kamara needs one catch to surpass Roger Craig for most receptions (358) by a running back in his first five seasons ... Ingram is the Saints' all-time rushing leader with 7,823 yards and has 100 scrimmage yards in each of his last two games. ... WR Marquez Callaway has a career-high six TDs receiving 2021 and has a TD catch in three of his past four games. ... TE Nick Vannett had his first TD receiving of the season in Week 12. ... DE Cameron Jordan needs one sack to give him at least five in 10 straight seasons. ... CB Marshon Lattimore is one of three NFL players with at least 10 passes defensed in the past five years. ... CB Bradley Robey had his first INT of the season last week. ... S Marcus Williams had a season-high nine tackles in Week 12.

FANTASY TIPS: Prescott could throw often against a Saints defense that has been stout against the run but has been a little shakier against the pass, giving up 251.8 yards passing per game.