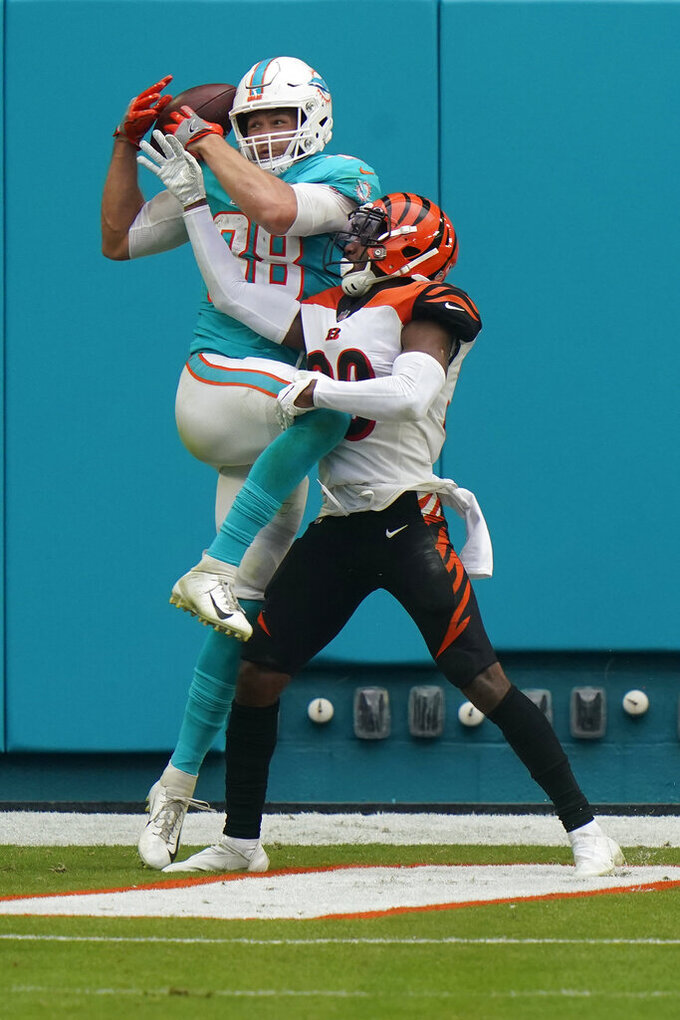 “Eyes on the chiefs,” he tweeted.

Perhaps the reigning Super Bowl champions deserve to be capitalized, but Ogbah had a point: The Dolphins might want to start thinking about Sunday’s home game against Kansas City. It will be a test of Miami’s progress from perennial also-ran to playoff contender.

Sunday's sloppy, ejection-filled 19-7 victory over Cincinnati left the Dolphins (8-4) with victories in seven of the past eight games. The Dolphins have their best 12-game record since 2003, but the closing stretch is tough. Their final four opponents were a combined 32-15 through Sunday, including AFC West leader Kansas City (11-1).

“We’re in a position where we get to play some meaningful games," coach Brian Flores said Monday. “And that's good.”

For the first time since 2002, the Dolphins have allowed 10 points or less in consecutive games. Their average of 17.7 points allowed ranks second in the NFL, and is an astounding two-touchdown reduction from last year's 30.9, worst in franchise history.

Kyle Van Noy led the charge Sunday with three sacks, and Xavien Howard had his NFL-high eighth interception before he was ejected for throwing a punch.

Miami allowed only 25 yards in the second half and finished with six sacks.

“When you see a teammate make a play, you just feed off that,” defensive end Shaq Lawson said. “And you want to go make the next play, and then we just feed off each other, man.”

The Dolphins rank fourth in trips to the red zone, but only 14th in scoring. They settled for field goals after stalling three times inside the 10-yard line Sunday.

For the first time in three weeks, Tua Tagovailoa pitched a complete game.

The Dolphins' top draft pick had been benched in the fourth quarter of his previous start, and sat out last week because of a sore thumb. He returned against the Bengals and had 26 completions for 296 yards, both season highs, with no turnovers or sacks.

Tagovailoa was especially effective in the second half when the Dolphins went no-huddle and scored on three consecutive possessions.

"The up-tempo things that we did in the second half really helped us to get the ball rolling,” Tagovailoa said.

The rookie improved to 4-1 as a starter, and became the third quarterback in the Super Bowl era to not throw an interception in his first five career starts, joining Dak Prescott and Kyle Allen.

“We’ve got to do a better job of keeping our composure,” Flores said. “It is going to be a point of emphasis this weekend we’ll leave it at that.”

3 — For the first time in franchise history, the Dolphins started three rookie offensive linemen. Pass protection was solid, and Miami's rushing total of 110 yards matched its third-highest total this year.

The closing stretch includes games against teams that beat Miami earlier this season: New England (Dec. 20) and at Buffalo (Jan. 3).