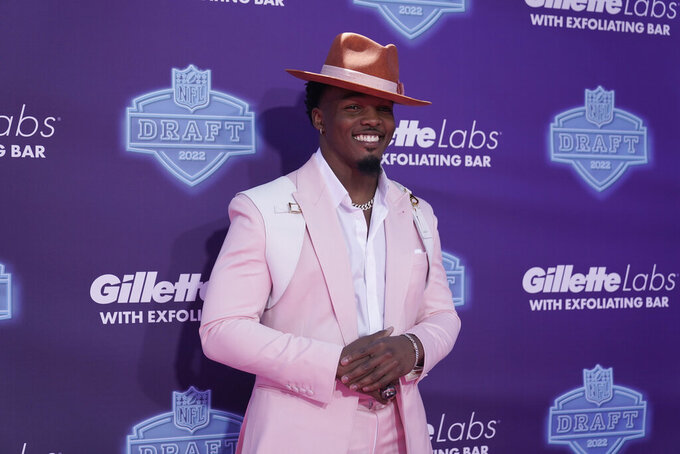 Georgia inside linebacker Nakobe Dean poses for photos before the first round of the NFL football draft Thursday, April 28, 2022, in Las Vegas. (AP Photo/Jae C. Hong) 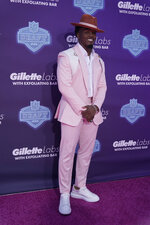 Nakobe Dean went to Las Vegas expecting to be a first-round pick and ended up waiting until the third round for the Philadelphia Eagles to call him.

“Made my chip grow,” Dean said.

Dean was an All-American and Butkus Award winner as the top linebacker in the country last season, helping Georgia win the national championship. He slipped to the 83rd pick because of medical concerns.

“There’s no concern,” Roseman said. “He has a pec injury that does not require surgery. He’s going to be on the field this weekend and we don’t anticipate him missing time.”

Dean wasn’t sure why teams questioned his injury.

“Nobody said I had to have surgery so for teams to be saying it is kind of crazy but I’m glad to be an Eagle, I got picked by a great organization and I’m ready to work,” he said.

Coach Nick Sirianni raved about Dean, who is considered undersized at 5-foot-11, 229 pounds.

“He’s a leader, his football IQ is so high, his instincts are so high,” Sirianni said. “It’s so hard to not get excited about him. He loves ball.”

In the second round, the Eagles took Nebraska center Cameron Jurgens, a potential successor to four-time All-Pro Jason Kelce.

The 6-foot-3, 303-pound Jurgens was a three-year starter at Nebraska. He was chosen with the 51st overall pick.

“All those things that we like, that our offensive linemen do, we saw in Cam,” Eagles vice president of personnel Andy Weidl said. “He’s a very intelligent guy, a former tight end, athletic guy. The explosiveness, the range, the mentality he plays with and (after) we got to know the person, there was a comfort level.”

Kelce, who turns 35 in November, contemplated retirement after last season. The five-time Pro Bowl pick will be an ideal mentor for Jurgens.

“I watched a lot of his tape and seeing a guy that’s able to move like he is and play as hard and with as much intensity as he does, that’s how I want to play and that’s how I want to model my game and be an athlete on the field,” Jurgens said of Kelce. “Just because you’re an O-lineman doesn’t mean you can’t run downfield and knock a safety out. I want to do stuff like he does and be able to fit into their system as well as I can. I’m stoked to be able to be in there.”

The Eagles were active in the first round, making two trades to get 2020 Pro Bowl wide receiver A.J. Brown and draft Georgia defensive tackle Jordan Davis. They acquired Brown from Tennessee after swapping picks with Houston to move up and select Davis at No. 13.