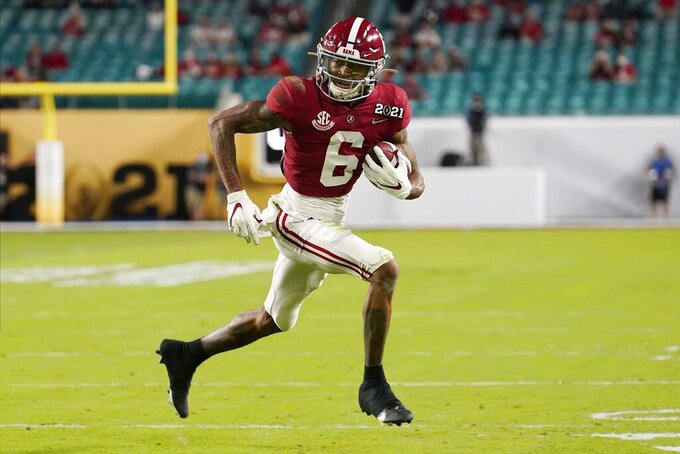 FILE - In this Monday, Jan. 11, 2021 file photo, Alabama wide receiver DeVonta Smith runs for a touchdown against Ohio State during the first half of an NCAA College Football Playoff national championship game in Miami Gardens, Fla. Heisman Trophy winner DeVonta Smith of Alabama is scheduled to appear in person in Cleveland at the NFL draft later this month. Smith, the wide receiver projected to be a high first-round pick, is among a group of players who have accepted their invitations to attend the draft.(AP Photo/Chris O'Meara, File)

PHILADELPHIA (AP) — DeVonta Smith is ready to do whatever the Philadelphia Eagles need from him.

The Eagles selected the Heisman Trophy winner after trading up two spots to No. 10 in the first round of the NFL draft Thursday night.

The Alabama wide receiver reunites with former teammate Jalen Hurts, who replaced Carson Wentz at quarterback for the Eagles last season. Smith had 117 catches for 1,856 yards and 20 touchdowns as a senior, becoming the first receiver to win the Heisman in 29 years.

“I can do everything," Smith said. "I can play inside, outside, special teams. You can put me in the backfield. You can do whatever with me.”

Smith was the third player from Alabama drafted in the top 10. One pick earlier, cornerback Patrick Surtain II went to the Broncos. Fellow receiver Jaylen Waddle went to Miami at No. 6. Quarterback Mac Jones was picked No. 15 by New England.

“Guys like Pat were making me better every day and me making him better and that’s what it’s all about,” Smith said about matching up against Surtain in practice.

The Eagles selected wide receiver Jalen Reagor in the first round last year, one pick ahead of wideout Justin Jefferson. They took J.J. Arcega-Whiteside in the second round in 2019 ahead of DK Metcalf. Philadelphia hasn't had a 1,000-yard receiver since Jeremy Maclin in 2014.

Investing heavily in the position the past two seasons didn't prevent the team from targeting Smith. With cornerbacks Jaycee Horn and Surtain gone, Smith was Philly's guy.

“We stuck to our board on this,” general manager Howie Roseman said. “This is a guy whose grades stuck out. This was one of the top players in the draft for the Eagles. We thought he was a great player and we didn't want to bypass that to fill a need.”

Smith has reliable hands, quick feet and is a sharp route runner. He reportedly weighed 166 pounds at the medical combine so his size is far from ideal, but his technical skills help him avoid getting locked up by defenders who try to get physical. He's been productive lining up inside or out.

“I don’t too much care what people say about my weight,” Smith said.

New Eagles coach Nick Sirianni, a former receivers coach who has spoken with excitement about the position, said Smith has “play strength.”

To move up, the Eagles gave Dallas the 12th pick in the first round and a third-round pick (No. 84) they received from Indianapolis in the trade that sent Wentz to the Colts.

Philadelphia originally had the sixth pick but they traded it to the Dolphins last month and gained an extra first-round pick in 2022.

Smith most likely would've gone to the New York Giants at No. 11 if the Eagles didn't leap in front of them. New York traded down to No. 20 and took wide receiver Kadarius Toney.

“We saw a player who is a smooth mover, who can open up and run, a player who can win at all three levels from different alignments," Eagles vice president of player personnel Andy Weidl said. "I think his ability to high-point the ball, to play above the rim, to adjust to the football, to make contested catches really stood out. Another thing we liked was his selflessness.”

The Eagles finished 4-11-1 last season. They entered with 11 total picks but have nine remaining after the trade. Their second-round pick is 37th overall and their third is 84th.