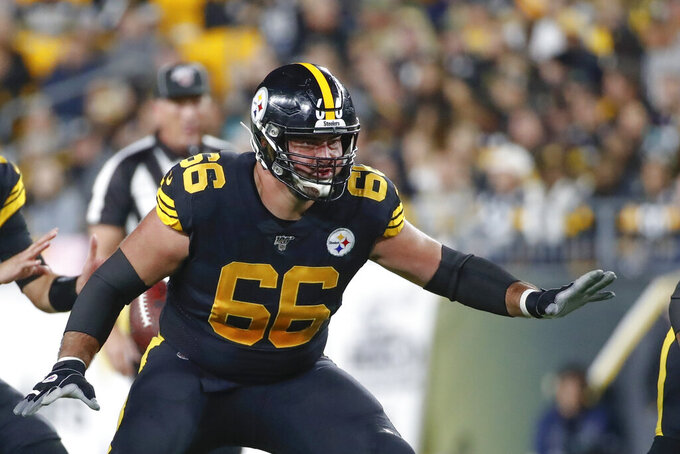 PITTSBURGH (AP) — David DeCastro understands he's running out of time. So are most of the other members on what's been one of the NFL's most consistent offensive lines for the better part of a decade.

The veteran Pittsburgh Steelers right guard turned 30 in January a couple of weeks before his fifth straight Pro Bowl appearance. Center Maurkice Pouncey is entering his 10th season in the league. Right tackle Alejandro Villanueva will hit 32 in September and is in the final year of his contract. The end isn't exactly near, but DeCastro can see it.

“Maybe we are getting a little old, but we still have some juice left in us,” DeCastro said Monday.

It's one of the reasons the father of two chose to play this season rather than opt out because of the COVID-19 pandemic. The game still represents “sort of a religious experience.” He's been on a good team for a long time. He's never been to a Super Bowl. That hole in his otherwise sparkling resume is jarring. He won't get a chance to fill it by sitting on his couch, even for a season.

“You have to be all-in when you’re playing football,” he said. “Once you say you’re done and you check out, you can’t really come back. I’ve always had that mindset of just being all-in.”

DeCastro is a study in contrasts. Thoughtful and engaging off the field, he is 315 pounds of controlled fury on it. He's made a living pulling to his left and mauling opposing defenders with decided glee.

Yet that fury comes part and parcel with the high standards he set for himself and his team. Last year, he didn't meet them. Neither did most of the rest of an offense that finished 30th in the league with veteran quarterback Ben Roethlisberger out for most of the season with torn tendons in his right elbow.

Without Roethlisberger, the Steelers couldn't run it. And they couldn't throw it. They couldn't do much of anything really despite sharing the sideline with a defense that led the NFL in sacks and turnovers.

“You lose a Hall of Fame quarterback and he’s getting paid a third of the salary cap, there is a reason they get paid that much,” DeCastro said. “I’m not trying to discredit Mason (Rudolph) and Duck (Devlin Hodges). Obviously, they are capable players, but when you lose a guy like that, that’s tough.”

So tough the Steelers put together their worst statistical offensive season in 30 years. They scored more than 20 points just once in the second half and managed just 30 points total over the final three weeks, all losses that dropped them to 8-8 and out of the postseason picture.

“It was pretty terrible,” DeCastro said. “You lose confidence and it just kind of snowballs. Find ways to lose games. You can’t win when your defense is getting five turnovers. Yeah, it was a pretty tough year. It falls on everybody.”

DeCastro believes Roethlisberger's return will solve some of Pittsburgh's problems. A shuffling along the line might help too. Left guard Ramon Foster retired in March. Matt Feiler, who started at right tackle, will move over to take Foster's spot. Zach Banner and Chukwuma Okorafor will battle for the chance to line up next to DeCastro at right tackle. The addition of veteran Stefan Wisniewski brings some depth in case things get sideways.

While DeCastro believes the 38-year-old Roethlisberger looks “happy” and “lighter on his feet" during the opening days of a training camp unlike any other, everyone is aware of the uncertainty ahead. The coronavirus has turned everything into a question mark, the fate of the 2020 season included.

“I know it could be shut down tomorrow,” DeCastro said. “You could have a free fall for the first time in 20 years. That’s pretty weird to a lot of guys who have been doing this for so long. It’s really screwed up everybody’s lives, so it is what it is. What can you really do at this point other than watch, adapt and move on?”