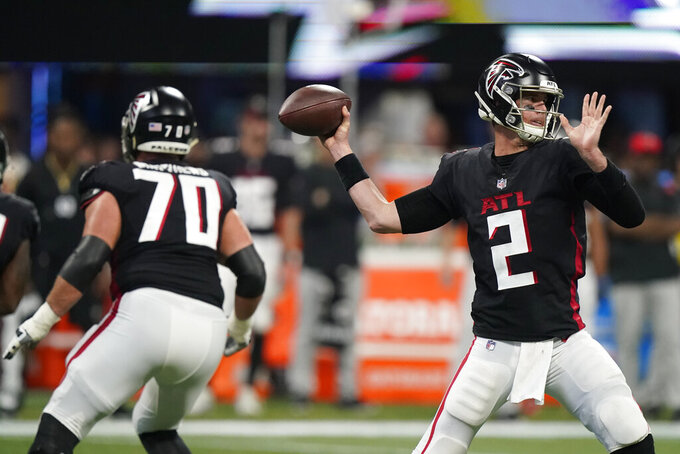 Atlanta Falcons quarterback Matt Ryan (2) passes in the pocket against the Tampa Bay Buccaneers during the second half of an NFL football game, Sunday, Dec. 5, 2021, in Atlanta. (AP Photo/Brynn Anderson)

OPENING LINE: Panthers by 2 1/2, according to FanDuel SportsBook.

TURNOVER DIFFERENTIAL: Falcons minus-7; Panthers minus-6.

FALCONS PLAYER TO WATCH: WR Russell Gage. Gage is coming off a big game last week against Tampa Bay with 11 catches for 130 yards. He'll face a Carolina team that has been No. 1 in pass defense for most of the year but has struggled in recent weeks and will be without No. 1 cornerback Donte Jackson following a season-ending injury.

PANTHERS PLAYER TO WATCH: Panthers RB Chuba Hubbard. Hubbard is expected to start for Christian McCaffrey, who is out for the remainder of the season with an ankle injury. Hubbard also started in the last meeting vs. Atlanta, rushing for 82 yards on 24 carries and a touchdown in the 19-13 win. Look for backup RB Ameer Abdullah to see plenty of work against Atlanta.

KEY MATCHUP: Panthers OC Jeff Nixon vs. Falcons' defense: Nixon, the team's senior offensive assistant/running backs coach, will take over play-calling duties this week after offensive coordinator Joe Brady was fired this past Sunday. Nixon worked with head coach Matt Rhule at the college level so he has a better understanding for what he wants than Brady did. The Panthers ran the ball 47 times for 203 yards against the Falcons in the last meeting and there's little doubt Rhule wants the team's focus on that this week.

SERIES NOTES: The Panthers are 2-1 against the Falcons under Rhule, but Atlanta has won nine of the last 12 matchups overall. Matt Ryan has typically owned the Panthers, but the veteran quarterback struggled in the first meeting this season, limited to 146 yards passing while throwing two interceptions. The Panthers relied on four field goals to win the game.

STATS AND STUFF: The Falcons are 5-2 away from home including a win over the New York Jets in London; the Panthers are 2-4 at home. ... Ryan threw for 297 yards last week and needs 86 yards passing for his 12th straight 3,000-yard season. He also needs four TD passes for his 13th straight 20-touchdown season. ... RB Cordarrelle Patterson had 96 scrimmage yards from scrimmage last week. He already has career highs in yards receiving (518) and yards rushing (489) and touchdowns (9). ... Falcons RB Mike Davis had 1,015 scrimmage yards and eight TDs last season as a member of the Panthers. ... TE Kyle Pitts is third among rookies with 709 yards receiving. ... Falcons LB Foyesade Oluokun led the team with 15 tackles last week against Tampa Bay. He also had 16 tackles in the last meeting with Carolina. ... The Panthers have not won at home since beating the Saints 26-7 on Sept. 19. ... QB Cam Newton has lost his last 10 starts for the Panthers. His last win as Carolina's starting QB came on Nov. 4, 2018. ... Newton did not play in the previous meeting with the Falcons, but QB Sam Darnold ran for 66 yards. ... Newton has 14 combined TDs in seven career home starts against Atlanta. ... WR D.J. Moore led the Panthers with 103 yards receiving in Week 12 against Miami, his 12th career game with 100-yard game. ... Panthers LB Haason Reddick has five games this season with at least 1 1/2 sacks. Reddick has 6 1/2 sacks and seven tackles for a loss in six home games. ... CB Stephon Gilmore had an interception in the last meeting. ... S Jeremy Chinn has at least 11 tackles in three straight games.

FANTASY TIP: Panthers PK Zane Gonzalez was 4 for 4 on field goal attempts in the last meeting with the Falcons. He has made 17 straight field goals and has not missed since Oct. 3.