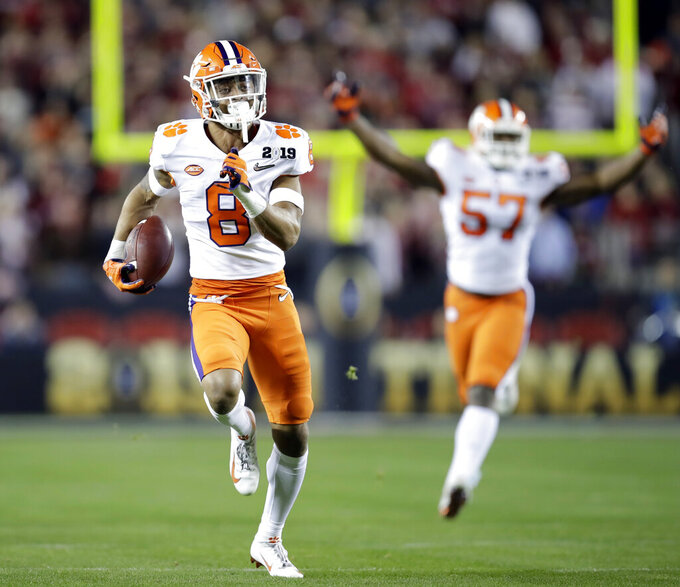 FILE - In this Jan. 7, 2019, file photo, Clemson's A.J. Terrell intercepts a pass for a touchdown during the first half the NCAA college football playoff championship game against Alabama in Santa Clara, Calif. Terrell was chosen by the Atlanta Falcons in the first round of the NFL draft. (AP Photo/Ben Margot, File)

They used the NFL draft to remake a defense that drew much of the blame for two straight 7-9 finishes.

The Falcons used four of their six picks on defensive players, including cornerback A.J. Terrell of Clemson in the first round.

The focus on defense continued Saturday, when the Falcons had three picks. Atlanta took linebacker Mykal Walker of Fresno State and safety Jaylinn Hawkins of California in the fourth round and Syracuse punter Sterling Hofrichter in the seventh and final round.

“We came into this draft 100 percent looking to bolster our defense,” Dimitroff said Saturday. “We obviously stayed on track.”

Dimitroff said it is rare to focus so heavily in the draft on one side of the ball. A trade with Baltimore for tight end Hayden Hurst and the signing of free-agent running back Todd Gurley addressed the most glaring holes on offense, leaving defense as the draft priority.

Terrell, Walker and defensive lineman Marlon Davidson of Auburn, who was taken in the second round, could win starting jobs. The rookies join Atlanta's prized free-agent addition, edge rusher Dante Fowler, as the biggest names in its defensive makeover.

Matt Hennessy of Temple, a third-round pick, will have an opportunity to win a starting job at left guard.

“We got more athletic, we got faster, we got more explosive,” Dimitroff said.

For the second straight day, the Falcons found a player who can play more than one position. Just as Davidson can shuffle around the defensive line and Hennessy could play guard or center, Walker says he's comfortable at any linebacker spot.

Walker (6-foot-3, 230 pounds) is similar in size to the player he may replace, De'Vondre Campbell, who signed as a free agent with Arizona. Walker said he played 60 to 65% of plays at inside linebacker at Fresno State. He said he's just as comfortable on the outside.

Quinn said Walker has the size to play strongside linebacker but also could play weakside in nickel formations.

For the first time in his 13 years in Atlanta, Dimitroff did not complete a trade during the draft. He made 17 trades in his first 12 drafts, including five to move up or into the first round. He said he was happy to find the players he targeted without having to trade away any of his six picks.

Hofrichter, from Valrico, Florida, said he grew up cheering for Chipper Jones and the Atlanta Braves.

Hennessy played for coach Geoff Collins for two seasons at Temple before Collins was hired by Georgia Tech in 2019. Collins gave the Falcons a strong endorsement of Hennessey.

“He was very, very positive about him and so was some of his staff,” Dimitroff said.

Quinn said he received a text from Collins on Friday night about “how excited he was to have Matt coming down. He knew what a special competitor he is.”

Hennessey's long-term home may be at center, but his first position will be left guard — the one opening on the offensive line. Quinn expects Hennessy will compete with veterans James Carpenter, Jamon Brown and Matt Gono. Two 2019 first-round picks, Kaleb McGary and Chris Lindstrom, are expected to start at right tackle and right guard, respectively..

Hennessey's future may rest on center Alex Mack's status. The 34-year-old Mack can become an unrestricted free agent after the 2020 season. For now, Quinn expects Mack to serve as Hennessey's mentor.