Fangio still unsure who to name as his starting quarterback 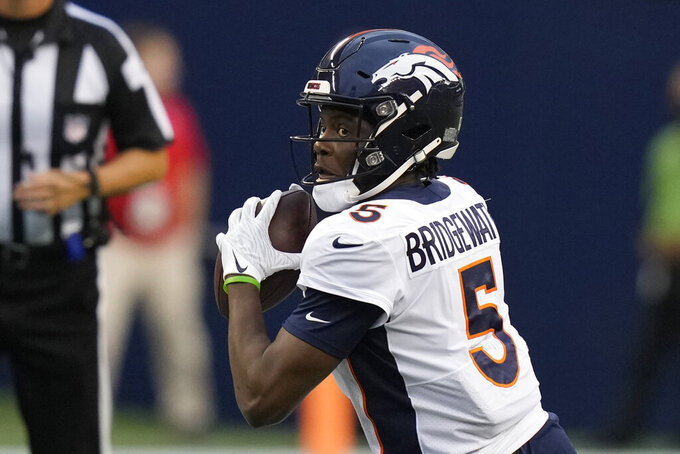 Denver Broncos quarterback Teddy Bridgewater (5) drops back to pass during the first half of the team's NFL preseason football game against the Seattle Seahawks, Saturday, Aug. 21, 2021, in Seattle. (AP Photo/Stephen Brashear)

“Not yet,” Fangio said when asked if he's decided who will start the opener Sept. 12 against the Giants.

What about Saturday night in the preseason finale against the Rams?

“We haven't decided that yet,” Fangio said.

Asked if he needs to see Bridgewater and Lock play in that game, Fangio was again coy, saying, “Not necessarily, but maybe.”

Each quarterback has started — and starred in — a preseason game with Lock throwing for 151 yards and two touchdowns on 5-of-7 passing against Minnesota and Bridgewater deftly directing Denver's offense to two touchdowns at Seattle.

“I think it's close,” Fangio said. “And it's close for a good reason: they both have played well. The good news of this competition is we've got two quarterbacks that we feel we can go win with.”

Bridgewater's performance against the Seahawks seemed to tip the balance in his favor, but Fangio extended the audition indefinitely.

“We just want to do it at the right time,” Fangio said. "Meaning, the right time obviously for the players involved, for the team involved and for everybody.

Fangio insisted he wasn't trying to play games or gain any sort of competitive advantage by keeping the Giants guessing, and really, he could name his starter any day now, even before this weekend's game.

Although Lock didn't play as well at Seattle (9 of 14 for 80 yards, no touchdowns and two sacks) as he had a week earlier, Fangio came to his defense Tuesday after watching the film.

“I think he was the victim of protection breakdowns there early when he got sacked those couple of times,” Fangio said. "We had a little quarterback-center exchange issue which caused him to get tripped up on that one play where we fumbled it in the red zone and had to settle for a field goal.

Fangio was equally effusive in his praise of Bridgewater, comparing his pocket presence after the game to that of Tom Brady's.

The closeness of this clash that has gone back and forth through 18 practices and two games is exactly how Fangio hoped it would go.

“It's pretty damn close,” he said.

Both Lock and Bridgewater are seeking bounce-back seasons in 2021.

Lock’s 15 interceptions last season tied for the league lead. He threw 16 TD passes and went 4-9, missing time with a shoulder injury and for violating COVID-19 protocols.

Bridgewater’s lone season in Carolina wasn’t good, either. He went 4-11 with 15 TDs and 11 interceptions, and he acknowledged this summer that he shouldn’t have continued playing after suffering a knee injury against the Buccaneers in Week 10.

While they had trouble stringing together good practices at training camp, both QBs have shined in preseason games. Bridgewater has completed 16 of 19 passes for 179 yards, two touchdowns and no interceptions. Lock has hit on 14 of 21 throws for 231 yards, two TDs and zero interceptions.

The Broncos have cycled through 10 starting quarterbacks between Peyton Manning’s retirement a month after Denver’s Super Bowl 50 triumph and his induction earlier this month into the Pro Football Hall of Fame.

With all of Denver’s QBs prohibited from suiting up against New Orleans in Week 12 last season because of COVID-19 protocols, practice squad receiver Kendall Hinton filled in at QB. But with the Broncos lining up in the wildcat formation for the first four plays, running back Phillip Lindsay technically started at quarterback that day.

This group has combined to go 32-48 since 2016, and Denver’s four consecutive losing seasons marks its worst stretch since the 1970 AFL-NFL merger.

No matter which one wins the job, it appears Denver will be getting a bargain.

Lock is due just over $1 million this season and next and Bridgewater's reworked contract calls for him to earn $4,437,500 this season with the Panthers paying his $7,062,500 signing bonus. He's set to become a free agent next March.

NOTES: TE Noah Fant missed practice with a leg injury, but Fangio said he didn't expect him to be out for an extended time. Also out were WR K.J. Hamler (non-COVID-19 illness) and DT Mike Purcell (ankle), who got hurt in warmups Saturday night but played anyway.