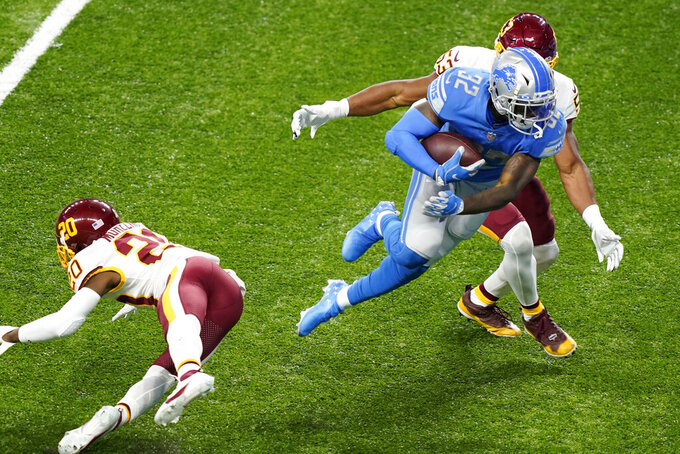 Detroit Lions running back D'Andre Swift (32) avoids a tackle by Washington Football Team cornerback Jimmy Moreland (20) and inside linebacker Jon Bostic (53) before falling into the end zone for a touchdown during the second half of an NFL football game, Sunday, Nov. 15, 2020, in Detroit. (AP Photo/Carlos Osorio)

Jameis Winston becomes the focus of Week 11 waiver wires as the injury to Drew Brees puts the former Buccaneers starter in position to run the league’s fourth-highest scoring offense.

At this point of the season, Brees owners in FAAB (free agent acquisition budget) leagues had better go all-in for Winston, who is one of several players available in most leagues who could impact the remainder of the fantasy season.

SALVON AHMED, RB, Dolphins: Ahmed looks like the “it” back in the seemingly ever-changing rotation in Miami’s backfield and comes off a 21-carry, 85-yard outing against the Chargers that included a touchdown. Matt Breida could be back in a couple of weeks, but until then, Ahmed is the clear choice on the Dolphins depth chart. Finding runners with the potential for 20-plus touches per game this late in the season is slim, which is why adding Ahmed — even for the short haul — is a strong play for fantasy owners in need of production at the position.

D’ANDRE SWIFT, RB, Lions: Week 10 marked a regime change in the Detroit backfield as Swift broke out with 16 carries for 81 yards and added five receptions for 68 yards and a touchdown. Despite just one start this season, Swift leads the Lions in yards from scrimmage and is second only to Adrian Peterson (108) in touches from scrimmage (101). Week 10 saw Swift earn a season-best 73% snap count, and with Detroit becoming committed to making him the lead back, now is the time to grab the rookie off the market. A strong finish to the season could also be a precursor to bigger things once the Lions move on from Peterson.

JAMEIS WINSTON, QB, Saints: New Orleans won’t need Winston to be the quarterback who threw for 5,109 yards and 33 touchdowns (and 30 interceptions) in 2019, yet the former Buccaneers QB will have the likes of RB Alvin Kamara and WRs Michael Thomas and Emmanuel Sanders at his disposal. Add the fact he’ll be protected by one of the best offensive lines in the league, and the potential is there for Winston to at least be an above-average fantasy quarterback.

Yes, the Saints could install a hefty dose of formations involving fellow QB Taysom Hill, but Brees owners should feel at ease should they decide to go after Winston, who will be a must-start in Week 11 against a Falcons defense that allows the most fantasy points per game to opposing quarterbacks. He will be a great streaming option for Josh Allen owners who will be in search of a replacement since the Bills are on their bye.

KALEN BALLAGE, RB, Chargers: Ballage followed up his Week 9 performance with 23 combined touches for 102 yards from scrimmage in the Week 10 loss at the Dolphins, his former team. He’s become the RB1 for the Chargers, making Justin Jackson, Joshua Kelley and Troymaine Pope fantasy non-factors at this point. Ballage is a useful RB2 in all formats and is worth the add in a Los Angeles offense ranked seventh overall in total yards.

JAKOBI MEYERS, WR, Patriots: The Patriots have finally found their WR1 in Meyers, who displayed his versatility by throwing a touchdown pass in the Week 10 surprise win over the Ravens. With snap counts in the upper 90% range the past three weeks, Meyers has established himself as Cam Newton’s go-to option, having pulled in 23 of 31 targets this month.

Meyers’ value will be further bolstered once he catches a touchdown pass. Newton’s TD toss to Rex Burkhead in Week 10 was just his third of the season, yet it stands to reason that number will climb down the stretch.

LA’MICAL PERINE, RB, Jets: Over the course of their bye week, the Jets reportedly made the decision to go forward with Perine, effectively ending the awkward timeshare between him and Frank Gore. Perine has just 47 carries this season with only one game of more than 10 attempts, so the increase in touches alone makes him a back to consider. He will also be an intriguing target in keeper/dynasty leagues as Perine will have the opportunity to determine how he fits in the Jets’ latest rebuild.

MARQUEZ VALDES-SCANTLING, WR, Packers: After two touchdown receptions in Week 9, Valdes-Scantling followed that with four catches for 149 yards in Week 10 that included a 78-yard touchdown. He leads the league with 21 yards per reception, yet the risk currently is a mild number of targets (45) and a poor catch rate (48.9%). He’s not quite Green Bay’s WR2, but his big-play potential merits strong consideration.

JALEN REAGOR, WR, Eagles: In his first two games since returning from injury, Reagor has amassed 13 targets, cutting into the production of WR Travis Fulgham in the process. He’s managing just 9.0 yards per catch, offsetting the fact he was drafted to be a deep threat, but he was on the field for 88% of the snap count in the Week 10 loss at the Giants is a clear sign that Reagor figures to be part of the game plan the rest of the way. Of course, the inconsistent play of QB Carson Wentz will also determine whether Philadelphia’s first-round pick can emerge as a fantasy factor.

TIM PATRICK, WR, Broncos: He’s been targeted at least seven times in four of his past five games and while rookie wideout Jerry Jeudy has established himself as Denver’s WR1, Patrick should still see a healthy share of targets the rest of the year. Patrick has a pair of 100-yard games this season and makes for a low-end WR3/Flex option in Week 11 when the Broncos get a bountiful matchup against a suspect Dolphins defense that ranks 21st against the pass.