FANTASY PLAYS: Players to start and sit for NFL Week 15 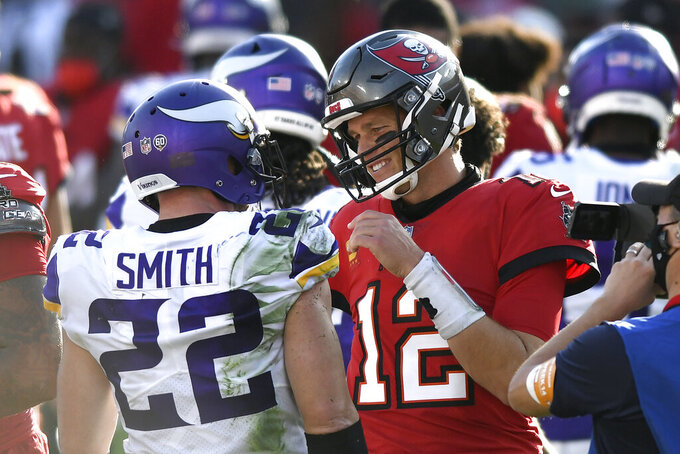 After a long regular season, it's good to be a fantasy owner in Week 15 with a chance to win a championship.

Although some leagues will decide titles this week, most will be in semifinal mode as the ups and downs of a season like no other have led the fortunate few to the penultimate game.

Consistency is excellent, but those seeking to play for it all next week should be advised to tweak where needed.

START: Tom Brady, QB, Buccaneers: His passing yardage has fluctuated over the past four games, but Brady has also tossed 10 touchdown passes in the same span. He’s in position for a possible huge outing as he faces a Falcons defense that allows the most fantasy points per game to opposing quarterbacks while also ranking 30th in total passing yards allowed and 28th in touchdown passes allowed.

SIT: Deshaun Watson, QB, Texans: The suspension of WR Will Fuller and injuries to others in the receiving group have limited Watson, who has just one touchdown pass in his past two games. Fantasy owners would be wise not to bank championship hopes on Watson, who must contend with a Colts defense that ranks fifth in fewest fantasy points allowed per game to opposing passers.

START: Mike Davis, RB, Panthers: Davis hasn’t topped 66 rushing yards since Week 5. However, he’s coming off a two-TD performance in Week 14 and will have a strong matchup in the form of a Packers run defense that allows 4.6 yards per carry (fifth highest in the league) while also being the fourth-worst fantasy defense against opposing running backs. Davis is also an underrated receiver who will enhance his value in PPR formats.

SIT: Todd Gurley, RB, Falcons: Atlanta is largely a running back by committee, as Brian Hill and Ito Smith have reduced the workload of Gurley, who managed just 31 yards on eight touches from scrimmage in Week 14. He’s a solid must-sit against a Tampa Bay defense that has allowed the fewest rushing yards in the league while allowing a mere nine touchdowns on the ground.

START: T.Y. Hilton, WR, Colts: Over the past three games, Hilton has caught 17 passes for 277 yards and four touchdowns. He’s definitely a must-start against a Texans defense that he lit up for 110 yards and a score in Week 13, continuing his career-long dominance over Houston’s pass defense.

SIT: CeeDee Lamb, WR, Cowboys: Lamb hasn’t topped 71 receiving yards since Week 5 and has managed just 126 yards in his past three games despite pulling in 13 receptions. The targets won’t translate into success against the 49ers, who have allowed the fifth-fewest passing yards in the league while ranking seventh in fewest average depth of target.

START: Logan Thomas, TE, Washington: Over the past two games, Thomas has caught 15 of his 16 targets for 141 yards and a touchdown. He’s been targeted at least four times in each game this season, so regardless of who starts at quarterback, count on Thomas to get a high volume of targets against a Seahawks defense that has allowed a league-high 3,833 passing yards.

SIT: Dallas Goedert, TE, Eagles: New starting QB Jalen Hurts and the return of TE Zach Ertz have slowed his production over the past two games. With the Eagles showing more of a run-oriented offense, targets could be reduced for Goedert against a Cardinals defense that allows the sixth-fewest fantasy points per game to opposing tight ends.

START: Brandon Aiyuk, WR, 49ers: The rookie has been targeted a whopping 39 times over the past three games, pulling in 22 of those for 289 yards and a pair of touchdowns. If Deebo Samuel (hamstring) is unavailable, look for Aiyuk to continue being the go-to option for QB Nick Mullens against a Cowboys defense that gives up the fourth-most fantasy points per game to opposing wideouts while also sharing the league lead with 28 touchdown passes allowed.

SIT: Baker Mayfield, QB, Browns: Mayfield has thrown for 677 yards and six touchdowns in his past two games, but it’s best to avoid him this week as he must contend with a Giants pass defense that allows the fourth-fewest fantasy points per game to opposing quarterbacks. Now is not the time to bet on Mayfield remaining consistent.

START: Derek Carr, QB, Raiders: Carr has completed 59 passes for 697 yards and five touchdowns in the past two games. He’s also become a running threat near the goal line and will be in position to have a big game against a Chargers defense that allows the fourth-highest average depth of target (9.3). Even with rookie deep threat Henry Ruggs III (COVID-19) sidelined, Carr will still be able to get his share of deep shots downfield.

SIT: Ty Johnson, RB, Jets: A popular waiver wire add prior to Week 14, Johnson was held to 16 yards on eight carries in the blowout loss at the Seahawks. The return of Frank Gore also hampered Johnson, who should be considered an afterthought across the board against the Rams, who are the third-most stingiest fantasy defense against opposing running backs.

START: Miles Sanders, RB, Eagles: Sanders snapped a five-game scoreless skid with a pair of touchdowns in the Week 14 upset of the Saints while also earning his second 100-yard game this season. The addition of Jalen Hurts at QB should continue to bode well for Sanders against a Cardinals run defense that allows 119.3 yards per game.

SIT: Chase Claypool, WR, Steelers: He hasn't scored in three straight games while managing a combined 105 receiving yards on 11 receptions. He’s definitely capable of breaking out in a big way, but sitting Claypool feels like the better play despite a favorable matchup against the lowly Bengals.