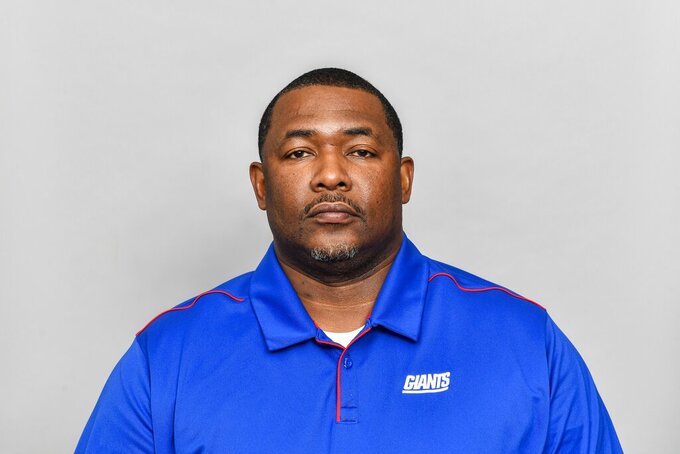 EAST RUTHERFORD, N.J. (AP) — The way the New York Giants defense has played this season, coordinator Pat Graham is almost certainly going to be considered for some head coaching jobs at the end of the season.

The 41-year-old Graham has transformed a defense that gave up 451 points last season into one that is now ranked 10th in the league and fourth against the run heading into Sunday's game against Kyler Murray and the Arizona Cardinals (6-6).

The defense has been at the forefront of the four-game winning streak that has catapulted the Giants (5-7) into first place in the NFC East.

During the run, the defense has given up 20 or fewer points in all four wins, with the most impressive performance coming last weekend in the 17-12 win over Russell Wilson and the high-scoring Seattle Seahawks. The point total was a season low for Pete Carroll's team.

The easy-going Graham shrugged off suggestions he would be in the mix for a head coaching job next season.

“I’m not smart enough to think ahead of today,” the Yale graduate said Thursday. “I’m trying to get better today. I need to get ready for third down versus Arizona on Sunday. I can’t even think about it like that, to be honest with you. That’s all I’m really focused on. Third down and two-minute today. Finish up early downs and get ready for red area. Right before here, I was going through red area meetings. I can’t think about that stuff, to be honest with you.”

His players have nothing but praise for Graham.

Defensive back Logan Ryan said Graham is a great human being, who listens to players, outworks everyone and isn't afraid to move players to different positions on the field on a weekly basis to confuse opposing teams.

“What we ran last week isn’t necessarily what we’re going to run this week because it might not give us the best chance to beat the Arizona Cardinals, which is all we care about,” said Ryan, who worked with Graham in New England.

“I just think his willingness to keep working, not to say, ‘Ah, I’ve got it. I’m the best coordinator. I’m up for a head coaching job. I’m going to just run what I ran last week, it was a masterpiece.’ No, he’s going to go back to the lab, come out with 25 new defenses and we’re going to try to run them and see what looks good and what doesn’t.”

Players have responded. Defensive lineman Leonard Williams is having a career year with 8 1/2 sacks. Tackle Dalvin Tomlinson has stuffed the middle with little recognition. Ryan and fellow free agents, inside linebacker Blake Martinez and cornerback James Bradberry, have been outstanding.

Even injuries to linebackers Lorenzo Carter, Oshane Ximines and Kyler Fackrell have been overcome. Rookie linebackers Tae Crowder, Cam Brown and Carter Coughlin have been ready when needed.

Martinez said Graham is a guy who gets straight to the point. Players know when they mess up and they are just as quickly taught how not to do it again.

There is also a lighter side to Graham. He kids Martinez about going to Stanford and it being a safety school for many students. Martinez says the same thing to him about Yale

“I think that’s that kind of other side to him where he takes a step back from the X’s and O’s, and kind of has fun with guys,” Martinez said.

“Yeah, he’s just an awesome guy. He’s able to adapt. He’s young, young enough to be able to relate to us. It’s just been awesome to kind of see him not as my position coach, which I had him before, but also to flourish as a defensive coordinator around everybody.”

If the Giants continue playing the way they have been, Graham will be in demand.

NOTES: QB Daniel Jones was limited in practice for the second straight day. Coach Joe Judge did not know whether Jones would be able to play Sunday. If not, Colt McCoy will get a second straight start. Also limited were Martinez (back), CB Darnay Holmes (knee) and T Matt Peart (ankle).